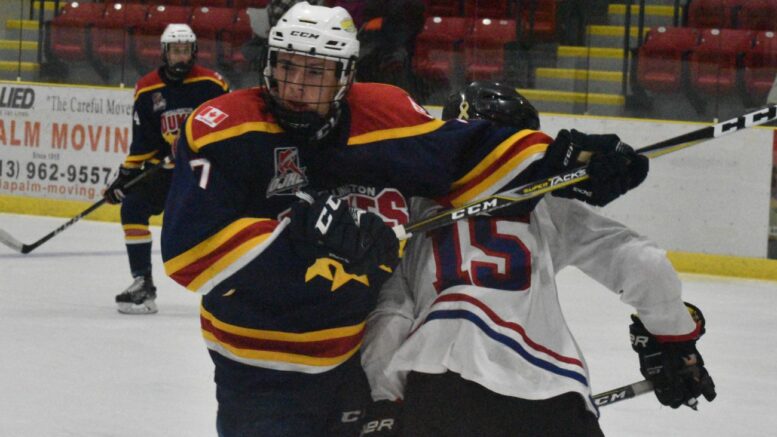 A pair of Wellington Dukes alums have found themselves on the 2020 NHL draft watch list but just when and how the annual cattle call for hockey’s top league formulates amid the COVID-19 pandemic remains to be seen.

Prince Edward County native Zach Uens finds himself slotted 82nd amongst North American skaters while Declan Carlile, a product of Hartland, Michigan is 162nd overall amongst players from this side of the Atlantic.

Both defencemen laced up their skates for the Wellington Dukes in seasons past and wound up being the top defensive unit this season for Head Coach Scott Borek at Merrimack College in North Andover, Massachusetts.

Carlile, who turns 20 on May 18 and is a dual citizen, spent a stop-over season in Wellington in 2017-18 but was a key cog in the Dukes lineup, scoring a half dozen times and adding 33 helpers in 54 regular season games.

While Carlile and Uens didn’t start Wellington’s Buckland and Dudley-Hewitt Cup championship  season off together as a pairing, they would wind up being a proficient tandem of puck-lugging, offensively-talented blueliners  for then Head Coach John Druce.

Uens turns 19 on May 13 and in his first full season in Wellington in 17-18 would pot a handful of goals and added 13 assists for 18 points playing alongside Carlile.

Carlile would move on to the United States Hockey League in 18-19 with stops in Lincoln and Muskegon while Uens helped Wellington make a second consecutive Buckland Cup finals where the Dukes were swept by the Oakville Blades.

After a season apart, the dynamic duo were reunited at the NCAA Division I program that plays in the prestigious Hockey East division against the likes of Boston College, University of Maine, University of Vermont, etc. and served notice they were ready to play amongst North America’s best.

Appearing in all 34 games played by Merrimack this season, Carlile led all Warrior defenceman with 22 points (four goals and 18 assists).

Uens, as a true 18-year-old freshman, was second in defencman scoring to Carlile with four goals and 14 assists for 18 points and also suited up in every game in the 2019-20 Hockey East campaign.

Uens saw his stock stay relatively static at 82, raising one slot over his mid-term raking of 83rd.

Meanwhile, NHL scouts watching Uens must have taken note of the way Carlile was playing and his stock boosted. Ranked 209th at the mid-term, Carlile shot up 47 slots in the final rankings that were released earlier this month.

Both were highly complimentary to the Wellington Dukes program as stepping stones to where they find themselves in this place and time- on the NHL draft watch list and freshman standouts on an NCAA Division I program.

“I really look back at my season in Wellington with a lot of good memories and it really helped me get prepared for this level of hockey,” Carlile told the Gazette. “I was surprised and humbled to see my ranking in my third year of eligibility and I’m just really excited to see where I wind up in my hockey career.”

Uens was said he was invited to take part in the NHL Combine testing however it appears that weekend workout session for head scouts from every NHL team is on hold until further notice.

The Ameliasburgh resident added that he and Carlile were afforded room to grow and make mistakes under the tutelage of Borek. 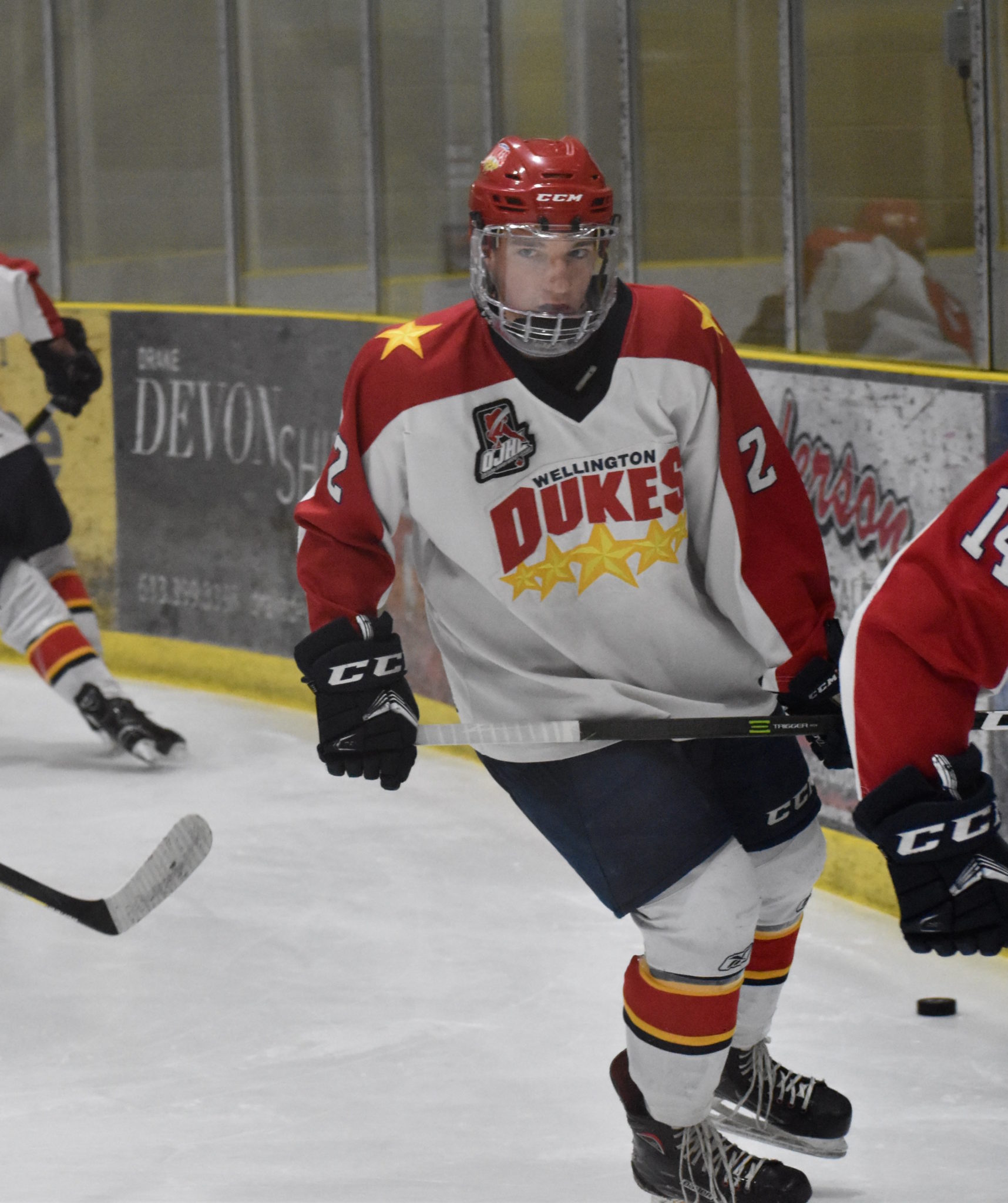 “There was lots of opportunity for us this season in the program and with both of us being mobile, we were able to use our speed and knowledge of what each other is thinking and going to do in order to play off one another which really helps,” Uens said, adding the program is thinking long term with regards to the defensive pairing.

“It’s very fast and physical hockey. Declan and I were on power play and penalty kill so we were able to quickly get reqauianted with each other and get acclimated to the NCAA level of hockey,” Uens added.

It’s not uncommon for NCAA teams to have more than  a handful of players put to 24 years of age and the cream of the graduating seniors crop often jump right into the NHL after their final NCAA game.

Uens said playing with top-end talent such as that actually helps the pair excel.

Once you have the speed and rhythm down, it’s an easier transition. Everybody knows their job and are in the right places at the right time,” Uens said.

Ranked well inside the top 100 North American skaters, Uens can prepare himself to be the first Dukes skater to be drafted into the NHL since the Chicago Blackhawks took Chris Auger in the sixth round of the 2006 entry draft.

Carlile could also have his name called when regular NHL activities commence but he’s staying grounded and focussing on next season with the Warriors.

“I’m really working towards playing professional hockey at some point and continuing my NHL dream but a priority is get an college degree so I’m set up for my future years,” Carlile said.

Regardless of what happens when the NHL holds the 2020 draft, both alums agreed the village of Wellington and the Dukes organization holds a special place in their hearts.

“Being from the County, getting to be a part of that organization was very special,” Uens said.

“It’s a great place to play, the fans were amazing and I loved my year in Prince Edward County,” Carlile added. “It’s just such an awesome place to play junior hockey.”