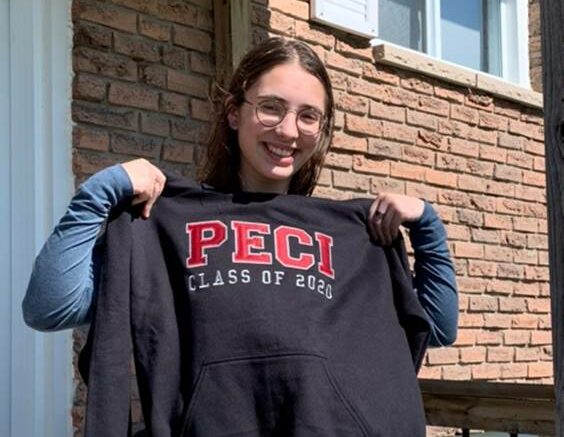 SCHOOL SPIRIT- Anne-Sophie Vaillant, the final student to participate in the Rotary Youth Exchange Program through the Rotary Club of Picton, beams as she holds up a PECI grad sweatshirt gifted to her by the local secondary school. (Submitted Photo)

It’s the end of an era as the local Rotary Youth Exchange Program winds down with its final participant set to travel home this week.

After over four decades participating in the program which sees the international service club send secondary school aged children all over the planet, the Rotary Club of Picton will no longer be welcoming students from abroad or sending locals on their inaugural world-wide journey.

The program first ran in Picton in 1976, when local Elizabeth Wright was sent to Australia.

Andy Janikowski, who has helped coordinate the program, spoke briefly with the Gazette about this program and its success locally.

“The Rotary District we are part of is 7070 which is Toronto and Eastern Ontario. They make an exchange with different districts in the world wherein we send a student from our district to theirs and they send one to us, though not necessarily the same community but the same district,”explained Janikowski.

“We realized that if students are dedicating a year to personal growth, they really should be learning a new language,” said Janikwoski.

The program precipitates what Janikowski describes as “huge growth” for students, enabling them to experience day to day life in another country. The program, he added, exists for the students.

“Through our support of the program, we have young people who come in and develop an understanding of international good will. They develop an understanding of Canada-the way Canadians think,” he added. “They also become ambassadors for Canada when they go back home. And, at the same time, we grow with them because we are exposed to their culture as well. In that way, Rotary is a ‘win’ because we have these young people coming in who are quite happy to talk to us about their country and way of life.”

For Anne-Sophie Vaillant of Lisle, France, the program has offered a unique opportunity to experience Canadian life, with an bitter-sweet ending that has come all too soon. COVID-19 has forced Rotary International to send all students on exchange back to their permanent homes.

“Living in Canada for a year as a Rotary French exchange student I had to learn to adapt to a new culture and to new families and habits. I also grew up and became more independent because my parents were miles away from me for the year. This experience has permitted me to meet new people and make friends, so I know that now I am less shy and more outgoing,” said Vaillant.

As Anne-Sophie pointed out, the experience has helped her not only learn about another culture and place but also learn more about herself-an invaluable lesson for anyone.

“It is an amazing experience that I would 100 per cent recommend to everyone to learn more about yourself and discover the world. For example, here I discovered the famous long Canadian winter with a lot of snow, ice, temperatures that are extremely low and lots of snow days! This experience of living the Canadian winter also goes with my dog-sledding trip that I had the chance to realize and I will always remember. I walked for the first time on a frozen lake as well. Those are only a few of uniquely Canadian experiences that I had this year,” enthused Vaillant.

Apart from a basketball tournament in early March, much of Vaillant’s experience with her Prince Edward County host family has been spent in self-isolation.

Local family Kevin Wilton, Suzanne Gould and their daughter Mary-Kate have been hosting Vaillant since about early March. Though their time with her coincided with the pandemic and subsequent isolation measures, they reported Vaillant is sad to be leaving prematurely.

“She’s not happy she has to go home. She’s feeling pretty sad and wishing she could finish out the rest of her plans, but we’re hoping she’ll be back for a visit,” indicated Gould.

Asked why they participated as a host family, they stated that they just wanted to help out the community and support the program.

“We really just wanted to help out the community and be able to support the program. This is our second time. We did it a couple years ago and had a good experience. It was just fun to do,” said Gould.

Wilton noted they’ve been able to learn about Vaillant’s background through the exchange and both his wife and daughter have been able to practice their French.

“Originally, we had only committed for a month because Rotary had indicated they were short on having host families. So, they approached us and we said we’d for sure be interested. Then, with the pandemic, everything changed and we asked if Anne-Sophie could stay with us longer. It helped out with our daughter as well. They developed a close relationship,” the family explained.

Janikowski echoed Vaillant’s sentiments with regards to the confidence the youth exchange program can instill in students.

“We have students coming in who at the beginning of the year are very shy or awkward, then over the year there’s this tremendous growth that we see. By the end of the year, they become very confident, outgoing and certainly their goals have broadened,” he said. “Their feelings as to what they could achieve in life have expanded and their address book basically spans the world. You have people who’ve never really left Picton becoming citizens of the world over their year abroad.”

Suzanne White can speak to this as well. She’s the guidance counsellor who has had the most experience working with this program, often spearheading communication between PECI and the Rotary Club.

She sees real-life value for the student body, as well as for the exchange students themselves.

“I think its really great for our student body to have that international perspective. It’s wonderful for them to make friends with people all around the world. We’ve had people from so many different countries over the years and I know some of our students have maintained friendships with them. It’s an opportunity for them to go travel and visit if they want to later,” expressed White.

White added that the exchange has been a unique opportunity for students to learn about different food traditions, different cultural values and various ways of learning.

“It just gives them a different perspective in their classes, you know, to hear what family life is like in other countries, as well as food traditions, learning styles and different cultural values,” said White. “Those are all really important for students and a very unique opportunity for them to not have to travel themselves and still gain that perspective.”

Despite the many benefits of the program, the Rotary Club of Picton has had difficulty finding host families and so, has decided to end the program.

“I think the nature of society in general, not necessarily our own community, but the society in general has changed. At one time, it was a very unique thing for someone to go abroad, now people tend to go abroad in the summer or March Break, so their exposure to international things has changed a lot,” explained Janikowski. “It’s no longer such a special experience. I think young people are a lot more concerned about losing a year. They don’t see it as a huge growth year, a year that enables them to reach beyond themselves. They see it just as a year lost.”

Janikwoski also posited that many students are afraid of becoming isolated from the peers, more than they were in the past.

“From our side, from the Rotary side, we have found a singular inability to find families wanting to host. Our club has gotten older so there aren’t as many young members with families. Also the community seems not quite as willing,” he said. “ In the past, we had community members stepping up and volunteering. That seems to have dried up.”

From the high school’s perspective, White said she’s hopeful the program will return in the future, but in the meantime, it will be sorely missed.

“As far as the high school goes, she’s made a real impact. It does expose the student body to students from abroad and broadens their horizons, so the school has really enjoyed her. It’s been win-win experience for us, the school and, I imagine, for the students as well,” said Janikwoski.

If nothing else, this last exchange has made an impact on the PECI community, the host family and on Vaillant herself.