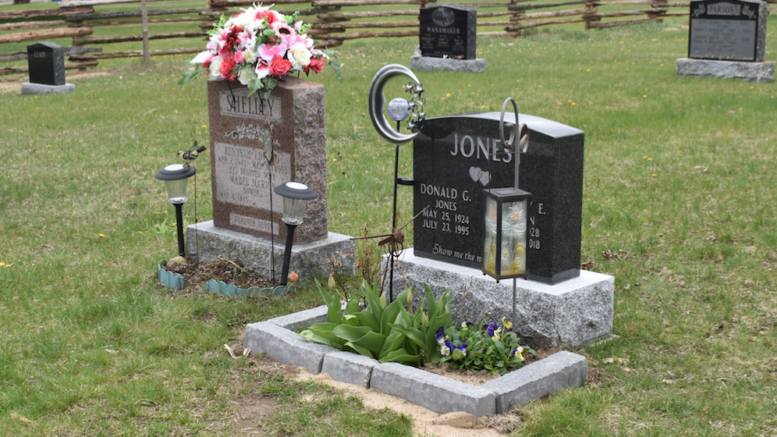 NEW ENFORCEMENT OF OLD RULES The enforcement of long established but previously ignored bylaws at Cherry Valley Cemetery has caught a number of bereaved families of guard. Above is an example of a new and approved flower box and ornament station. (Jason Parks/Gazette Staff)

A resting place for many Prince Edward County residents has become ground zero for considerable heartache and debate. Cherry Valley Cemetery owner Al DeWitt has recently come under fire for altering grave sites by removing adornments as per specific bylaws.

DeWitt stated the bylaw has been in place “for decades” however had not been acted upon until just over a year ago when he gained ownership of the cemetery. The United Church of Canada sold the property and the adjacent sanctuary a little over a year ago and regular Sunday services had ceased taking place at the church just over 18 months ago.

DeWitt, who has been in the cemetery business for upwards of 30 years, took some time to speak with the Gazette about this issue.

“The bylaws for the cemetery have been in place for decades- there’s always been bylaws. But, a lot of times copies of the  bylaws weren’t handed out when plots were sold and they were never posted in the cemetery,” he said.“ So, eight months ago the bylaws were posted at all the entries into cemetery.”

The bylaws are posted on what DeWitt described as 7 or 8 foot billboards by either entrance of the cemetery. They are as follows: 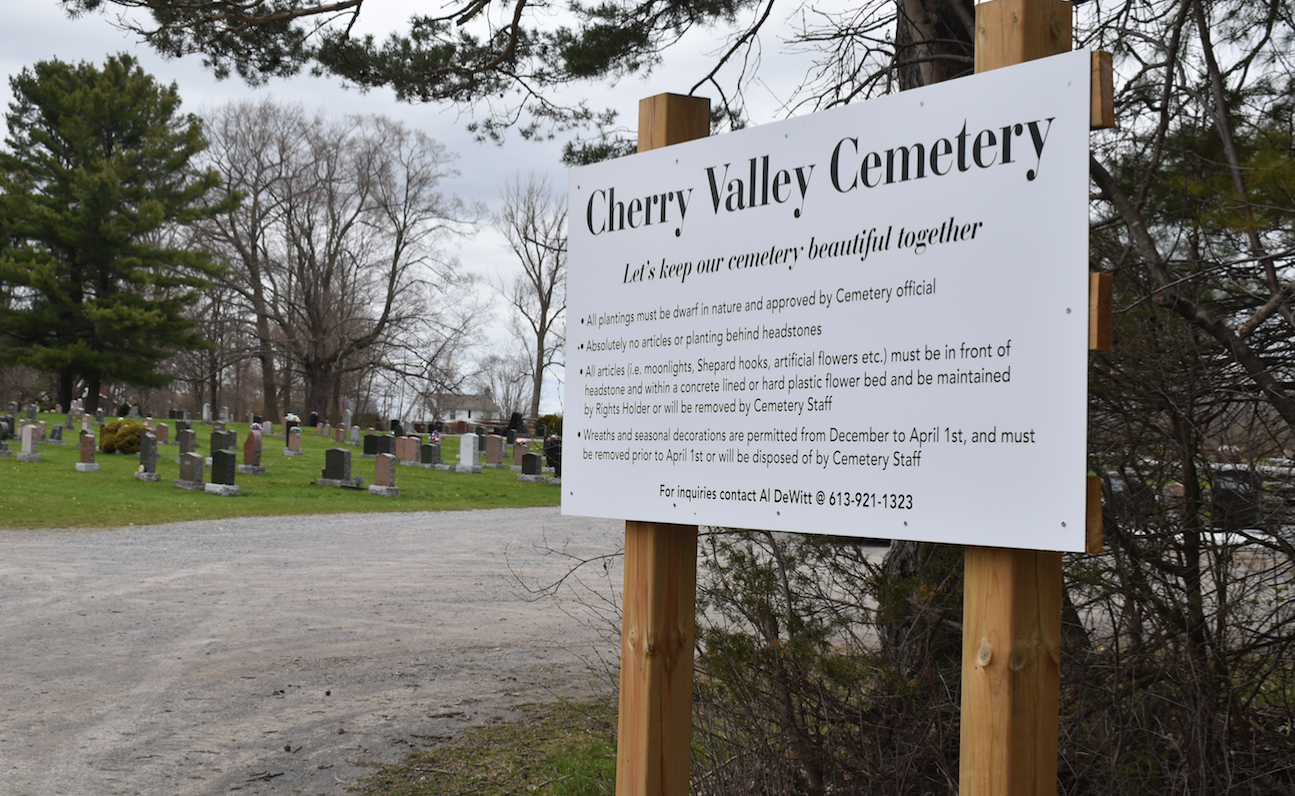 One of the large boards advertising the enforced cemetery bylaws and contact information of cemeterian Al Dewitt. (Jason Parks/Gazette Staff)

Gillian Glover of the Bereavement Association of Ontario (BAO) spoke briefly with the Gazette to help explain the creation and framework for bylaws within all Ontario cemeteries.

She explained that cemetery bylaws are created by the site owner, in this case, by the former Cherry Valley Cemetery Board about 40 years ago, although there are certain templates that the BAO can provide.

The bylaws are also subject to review and must follow public notice protocols.

“The bylaws have to be approved by the registrar, which is a process that the BAO goes through,” said Glover. “They do have to be submitted to us and we have criteria that we need to review them against to make sure they are compliant with the legislation.”

“Some cemeteries change the bylaws more often than others, but we do have a sample template which is the most accurate sample we offer cemeteries right now if they want to redo or update their bylaws,” said Glover. “We also have a process that must be followed, which includes public notice. Notice must be posted at the site of the cemetery as well as being posted within a local newspaper.”

When asked what prompted the change of enforcement, DeWitt indicated that since he acquired the cemetery last year, clean-up has been part of his mandate to keep the area tidy and well-maintained.

“I’ve been doing this for over 20 years, we’re there to make the cemetery neat tidy and well maintained. We’re willing to pay for it and even do the work to make it happen,” he said.

As he described, DeWitt has purchased landscape stone to help people construct flower beds in which to put their mementos and he is also offering to construct the flower beds.

“We’ll supply the stone, we’ll build the beds, you can have your shepherd’s hooks inside the beds. You can have your moon lights, your toppers…there’s all kinds of toppers still on the stones down there. It’s on Facebook that they’re all gone, but they’re not,” he added.

DeWitt noted that people are being advised to bring wire to secure their toppers as the cemetery has had issues with those blowing away into neighbouring properties.

“It’s not about telling people what they can’t do, it’s about telling them how they can do it and that we’re willing to do it with them and help,” he said. “I’m not saying no, I’m saying here’s how.”

Nonetheless, the issue is sparking social media outrage amongst some. In just one day, DeWitt noted he encountered close to 30 bereaved family members concerned about the changes in the small cemetery.

“There’s things going around on Facebook that are inaccurate and untrue. Things were removed, this is true. They were put in a neat pile,” insisted Dewitt. “Now, they weren’t neat maybe when people got there because other people have rummaged through it, and I’m sorry about that.”

Written at the bottom of each billboard is DeWitt’s contact information. Which he says many people have availed themselves of.

“Of the phone calls I’ve had, I’d say about 95 per cent, by the time we’re done the conversation, it’s gone very well,” he confirmed.

There have also been those who come to the cemetery to proactively remove decorations from grave sites who have met with DeWitt and come to an agreement with regards to how to best commemorate their loved one while abiding by the rules.

“One older gentleman, I saw him come in and grab his statue and he came over and put it in his trunk. Then he went over to his other family grave, grabbed another statue and put that in his trunk,” described DeWitt.

“So, I walked over and I asked him if i could help. He recounted that he’d been told people weren’t allowed to have anything around their stones,” he said.

DeWitt reportedly told the man that this was absolutely untrue, but that there are rules as to how adornment should be done.

“I helped him take the statues out of his trunk and we went and put them back,” recounted DeWitt. “ He was very happy and thankful and went on with his day. And, we’ll look after his stone with the statues the way they need to be.”

In a sense, DeWitt’s enforcement of cemetery bylaws is a way of levelling the ground to make sure everyone is treated the same way and are following the rules.

“We have to be able to maintain the cemetery the way it deserves to be maintained for everybody,” said DeWitt. “The rules have always been there, we’re just asking people to follow the rules.”

But for some, this sentiment rings hollow.

Thompson recently buried her father at the Cherry Valley Cemetery. At the time, she noticed some moon lights had gone missing, but thought nothing of it.

That is, until a red cardinal that had been placed by her father’s grave also went missing.

“My daughter put a red cardinal out there on a tiny wire. She went out the next morning and said it was gone. I didn’t think that made sense,” said Thompson.

“We had a burial out there years ago and there was big “to-do” about everybody putting stuff on the graves etc. They let it go through that one thing was allowed, not a whole bunch of things, because they do have to cut the grass, so that’s what people were doing,” she added.

Grief-stricken, Thompson said she would not be contacting the cemetery owner right now, after describing what she saw as items just being dumped behind the garage in the cemetery. 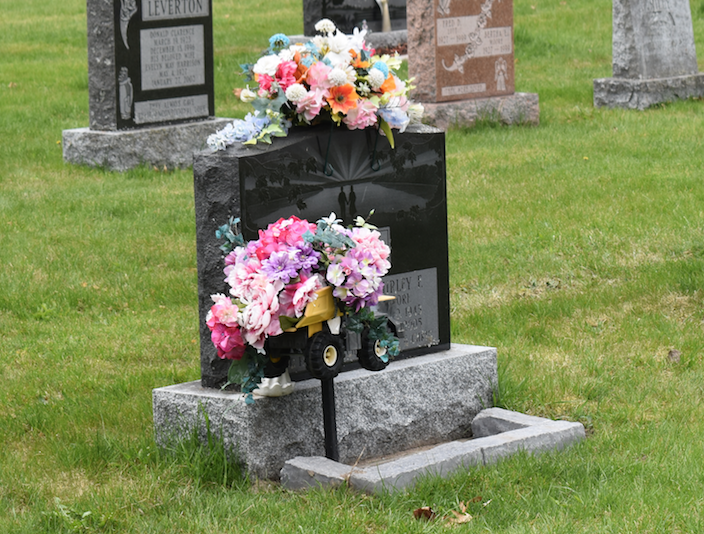 Ornaments of all description are allowed to be placed in a boxed space in front of the head stone. (Jason Parks/Gazette Staff)

In the meantime, she is left with more questions than answers.

“Why didn’t they say something when I was burying my Dad? They were out there that day,” she questioned.

For others, such as Sabrina Hudson, although the change was at first saddening, she sees value in the work done by the new owner of the cemetery.

Hudson noted she has quite a few family members buried there, including her mother, step-mother and grandparents.

“I felt a little sad that people’s belongings were moved, but when I went out and found that they were all still there I gathered up what did belong to us and we brought them home and put them in the garden,” she said. “Since then, I’ve made a call to Mr. DeWitt and he’s been very understanding. He even let me know they have provided landscaping stone to build a garden in front of your loved ones grave, following certain criteria.”

Though she admits she was caught off guard, not spending much time in the cemetery, she also acknowledged that to phone or send a letter to every relative would be a formidable task.

“He did let me know there has been a sign up for quite some time-I think around 8 months-and that he has owned the cemetery for 13 months now. So, he did post that sign to let families know these new requirements were coming into play,” she said.

At the end of the day, Hudson believes that DeWitt’s intentions “are good” in that he is only trying to improve the cemetery.

“He’s really just trying to make the cemetery tidy again. He did let me know there has been bylaws in place for 30 years,” she noted. “Previously those hadn’t been fully met and so he just told me how I could help them meet the criteria and even offered to help me himself.

Hudson attributes some of the hard feelings people are experiencing to the mental duress many are facing due to the current health crisis.

“I think a lot of the tough responses may be because of what we’re going through with COVID-19. I know a lot of people are kind of struggling,” she emphasized. “I encourage anyone whose feeling that sadness to see outside of it and understand that he (DeWitt) really is trying make a difference and is going out of his way to be kind, helping with these gardens.”

When asked whether or not she would take DeWitt up on his offer of a garden, Hudson responded that as soon as social distancing restrictions were eased, she and her husband would be out there to try and build something, perhaps even a garden.