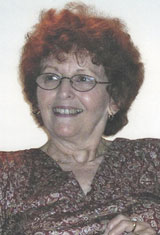 Cherie Madeline Allen
Suddenly, on April 15, 2020, at the age of 86, in Prince Edward County Memorial Hospital. Beloved partner to George MacNabb for 20 years, and mother to Dana (Lya) Beeton of Oakville, Jaye (Jane) Beeton of Dartmouth, N.S. and Todd Beeton of Abbotsford, B.C. Born and raised in the Beach area of Toronto, Cherie was drawing since she could hold a pencil. In the 1970’s she was greatly influenced by Three Schools on Brunswick Avenue, taking courses in life drawing, painting and sculpture from many well-known artists. Cherie worked in all mediums from water colours to collage and oil painting. She presented her work wherever she lived. She also worked at St.Michael’s Hospital for ten years beginning in the early 70’s. In 1988, she moved to Southhampton and began a new phase of her life. She retrained as a PSW and worked for many years at a local nursing home. She also became active with the Southampton Artists Cooperative Art Gallery and presented her work at several art shows in Southampton, Owen Sound and London. Cherie returned to Toronto in 2002 to be with her new partner George MacNabb. In 2010, they moved to Picton, Ontario. Cherie continued to paint, garden and enjoy her new-found life and home. Her creative talent was not limited to just her canvases. Every apartment or house she lived in was tastefully decorated. She had a real knack for selecting the right colours and decorations. Cherie was a lovely, strong and creative woman with a beautiful smile, and great sense of humour. Fondly remembered by many in her Library book club and deeply missed by her sister Janice (Brian) Bobbie of Toronto, and step-mother Sheila Allen. She leaves behind grandchildren, John, Aaron, Chris and Kayli, of Oakville, and Jacob, Jeremy and Joseph of Dartmouth, Nova Scotia. Cremation has taken place and a celebration of life will occur at a later date. Donations in her memory can be made to the PECMH Foundation, PEC Library and the PEC Arts Council. Arrangements entrusted to Whattam Funeral Home, 33 Main Street, Picton, ON www.whattamfuneralhome.com