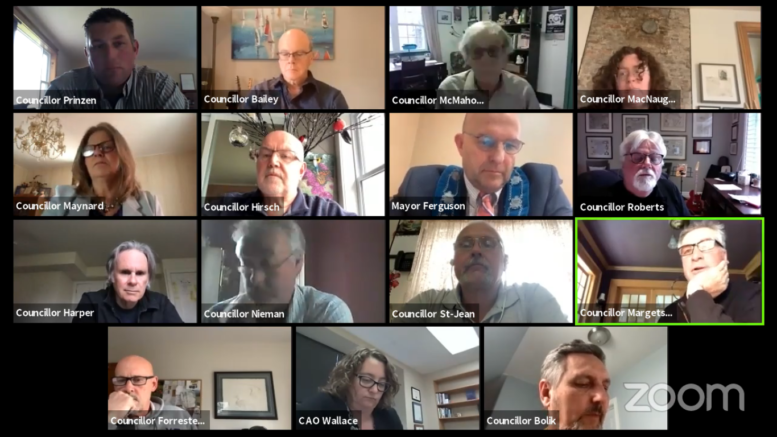 ZOOM IN - Council votes unanimously to withdraw the resolution made by Mayor Ferguson with regards to discouraging non essential travel to the County. (Sarah Williams/Gazette Staff)

After much discussion and debate both electronically and in the community, a resolution to discourage non-essential travel to Prince Edward County during the provincial state of emergency was rescinded at Thursday’s  Special Council Meeting. The resolution had been deferred at the previous council meeting so that it could be rephrased.

Having extended the provincial state of emergency to May 19th, the day after the famously raucous Victoria Day weekend, the premier’s message to Ontarians looking to celebrate at their cottages or otherwise is simply, “there will be plenty more long weekends to come.”

And after organizing a conference call will the mayors of cottage country, including Mayor Steve Ferguson, Ford also urged those who do travel to respect the public health guidelines.

Ferguson reported many cottage country mayors share his concerns regarding non-essential travel and the possible risks that could pose to the supply chain as well as the health of the permanent population, not to mention the strain on small, rural hospitals.

“Yesterday afternoon, I participated in the conference call with the premier and members of cabinet and caucus. The purpose was for the premier to receive advice and comments from rural municipalities regarding the imminent arrival of cottagers and tourists, with particular emphasis on the upcoming Victoria Day weekend,” said Ferguson. “Muskoka Lakes are particularly worried and have been very vocal about this. Not unsurprisingly and reassuringly every municipality who had the opportunity to speak shared similar concerns.”

Those concerns include crowd control, lack of health care resources, strain on essential resources, health risks, pressure to adjudicate members of the community with opposing opinions and pressure on bylaw and law enforcement resources. Ferguson noted that approximately 100 mayors participated in the call with the premier.

“Each municipality stated the need for a position to be taken by the province, particularly as warmer weather approaches,” Ferguson commented.

Based on what was recommended, added Ferguson, the premier’s conclusion was that a message needs to be sent to the public concerning travel in general and particularly to rural areas.

“To that end, the premier has begun stating that if people can avoid unnecessary travel, they should. If people do travel to secondary residences or cottages that they bring with them the necessary provisions so as not to draw on local resources. And that everyone continue to observe the public health protocols,” he said.

“Considering the position the Premier is taking on this matter, I think it inappropriate and disrespectful to put forward today a revised resolution, which is now effectively redundant,” stated Ferguson. “For that reason, at the appropriate point during today’s meeting, I will be taking steps to withdraw the resolution.”

Ferguson was adamant that the municipality must trust the provincial government to adequately convey the concerns about the health and safety of cottage communities and that the public will act accordingly.

Ferguson also acknowledged he has received a “significant amount” of phone calls, text messages and emails regarding the proposed resolution.

“Everyone can appreciate we’re working in circumstances we’ve never encountered before amidst our collective worry about family, finance, health and our future. We all have roles to play as we navigate our way out of the pandemic, but particularly we need to exercise patience and understanding. Effectively, we’re all on the same team,” stressed Ferguson.

In his speech, the mayor also paid heed to the benefit of seasonal visitors, be they cottagers or tourists, and the need to help businesses throughout this challenging time.

“Our seasonal property owners, of course, make huge contributions to our economy, businesses and cultural amenities. Our visitors, whether to Sandbanks, wineries or other attractions under normal circumstances, help all of us,” he stated. “And our permanent population-the stalwarts of the County-whether United Empire Loyalist stock, or more recent arrivals, whether members of the agricultural community or another profession, are of course major contributors and beneficiaries. But our businesses of course need as much support as we can possibly provide while we go through this and as we gradually emerge.”

Several comments from the audience were made by members of the public who were previously unaware that Ferguson planned to rescind his resolution.

Craig Alexander was one such member of the public.

Alexander has lived in the county for 17 years and is also a business owner and considered to be in a high risk group for COVID-19.

“In your last council meeting, it was stated that protocols were being put in place to help the most vulnerable-the senior community. That’s extremely commendable and appreciated,” commented Alexander. However, Alexander urged council to consider the real threat this virus poses to not only seniors, but also those who are comparatively young and healthy.

“In the United States, there are thousands of people who have died who are between 20 and 40 years old and they are expecting the numbers to rise above 134,000 by August. So, it isn’t only a disease that affects the older population,” he said. “I feel labelling it as such puts a target on our backs and it also leaves the door open for younger people to think the County is only closed to protect seniors and those with pulmonary and respiratory illnesses.”

The disease doesn’t discriminate, Alexander added. It can and does affect every age group.

Another concern brought up by Alexander was our close proximity to large areas, such as Toronto and Montreal, whose COVID-19 cases far outpace those in the County.

He added that although, as a business owner, he hasn’t received an income for two months, he hopes the community will continue to remain closed to tourists until the end of the municipal state of emergency.

“I, along with many business owners, have not made an income in about two months and I count on tourism for my living,” he said. “We are extremely fortunate to live in an idyllic setting that has very few cases of the virus. The issue for me is we live between two very large cities that have had the highest number of COVID-19 cases in Canada-Toronto and Montreal.

He further noted that while Toronto’s curve of infections has slowed and is starting to come down, the same cannot be said for Montreal.

“These are our tourists,” he added.

Alexander added that as a community we cannot afford to have tourists that come to our County at this time and possibly infect hundreds of residents.

“Our infrastructure can’t handle it. I had to go to the emergency room last summer and waited for hours, as the waiting room was full. The triage nurse said this was due to the influx of summer tourists. The virus didn’t even exist at this time,” he said.

Alexander noted that a major concern for him is that the premature opening of businesses could result in an uptick of COVID-19 cases, resulting in a prolonged closure that would ultimately be more damaging.

Another speaker was Joshua Grant, who compelled council to act in coordination with the provincial government.

“I understand that the situation is fluid and there are a lot of unknowns. As a full time resident, I urge council to follow whatever the Ontario Government and the provincial health authorities are recommending,” urged Grant. “I think that would be best practice, given there are so many different components in terms of the physical health, mental health and the economy. My opinion is, we should just follow what the provincial government does-no more, no less. There’s so much to consider. Even though we’re trying to what is best for our local population, we’re essentially one with everyone else.”

Finally, representing the business community was Executive Director of the PEC Chamber of Commerce, Lesley Lavender.

“The chamber recognizes that a large portion of the community is made up of senior residents, the cohort most vulnerable to serious illness from COVID-19. We certainly do not want to put these residents or any others in a vulnerable position. However, county businesses have been suffering. This time of social distancing and mandated business closures has been very difficult for the business owners, but also for those people who worked in businesses, many of whom were laid off.”

Lavender added that many businesses rely on seasonal visitors in order for the business to remain viable.

“There’s significant fear that many businesses in the county will not survive this pandemic if these businesses are denied access to the client base that spends money in their stores,” stressed Lavender.

Councillor Bill Roberts spoke to Lavender’s comments and noted that the B.C. Government is advising residents not to travel to neighbouring communities and that this was supported by that chamber of commerce in that province.

“Premier Hogan in British Columbia came out in the last day or so saying this was not the time for people to take road trips to neighbouring communities in B.C and that the limits on travel would likely not be relaxed until well into June.” Roberts explained. “ Following that, the B.C. Chamber of Commerce came out saying they supported that decision and wanted to support the discouragement of non-essential travel.”

“I didn’t consult with any of our other chamber networks for this, but we are connected through the Ontario, Canadian and international chambers of commerce, “ Lavender replied.

The motion to rescind this resolution was agreed upon unanimously by council.