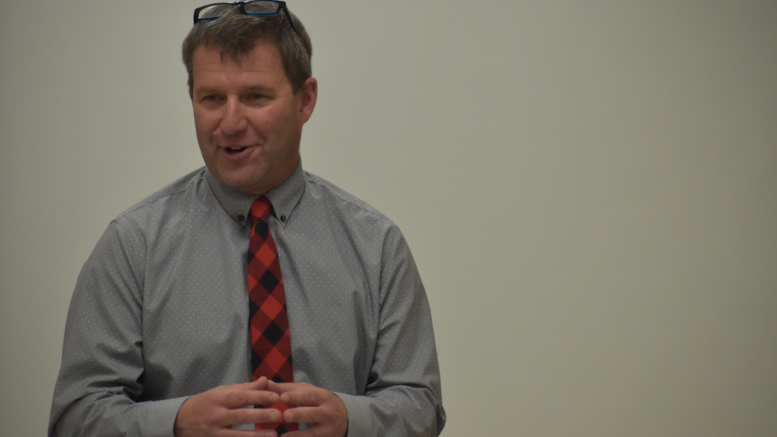 In a new normal, the Rotary Club of Picton is no exception when it comes to hosting virtual meetings. On Tuesday, the local service club invited Hastings and Prince Edward District School Board Director of Education, Sean Monteith, to speak via Zoom.

The Director of Education joined the Rotary meeting, as he described, in between dropping of chrome books to various families in need of technology.

Monteith spoke of HPEDSB’s specific challenges during COVID-19, along with his vision of leadership and how that correlates to engaging students in learning activities both during the pandemic and beyond.

This has been Monteith’s first year as the Director of Education for HPEDSB and an unusual one at that. The local public Board of Education hired Monteith in 2019 to replace former Director Mandy Savery Whiteway who retired.

“Have we ever faced challenges like this? No, I have not. I’ve been in the sector for 26 years and I’ve been a director going on eight, along with being a supervisory officer in Ontario for over a decade. Never have I seen anything like this,” he commented.

From a messy few months embroiled in a job action to the pandemic itself, Monteith noted schools in the HPEDSB district have effectively been shut down for two months.

Rather than focus on the obvious negatives of the situation, Monteith described a “glass half full” mentality that behooves anyone in a position of his authority to adopt.

“It is presenting unprecedented challenges for us. But rather than focus on the challenges and concerns I have, I think it might be helpful to know that if you’re going to be an executive or chief executive of an organization the size of ours, it is absolutely imperative and incumbent on you to be a glass half full kind of person. Be realistic, have your feet on the ground and be positive and optimistic,” said Monteith.

Among the challenges facing HPEDSB at this time is the delivery of public education from Maynooth to Athol South Marysburgh to areas that have sporadic wifi and broadband access.

There is also, as Monteith described, the challenge of varying socio-economic and demographic factors that come in to play when learning, especially remotely.

Employing his glass half full mentality, Monteith described this time period as an opportunity to re-calibrate and as well as being a time of reckoning.

“We’ve been forced to stop and smell the roses so to speak, perhaps re-calibrate our priorities. I take direction form the Ministry of Education only as far as it is responsive to the needs of the families, students and communities of the HPEDSB district school board.”

“I am very focused and very cognizant- I will even go so far as to as as very concerned-about the state of our families and our staff right now during these times, to the point where our priority is not just making sure we are reaching out to families, but we are reaching families,” stated Monteith. “ It’s hard for some to believe, but we have some families whose biggest concern isn’t whether or not their child gets their English assignment done right now. Their biggest concern is whether or not they’re going to be able to feed their family.”

Pandemic aside, the Director of Education said he’s concerned not only with setting priorities within the board and recovering from a financial deficit, but also improving the dismal 70 per cent graduation rate in this district.

“There is no justifiable reason why our HPEDSB graduation rate is what it is. It needs to be higher and as a result we need to make decisions on an administrative level as to where to allocate our resources so we can put proper support in for kids to graduate,” he commented.

By comparison, the provincial graduation rate sits at about 86 per cent.

Bob Bird of the Rotary Club of Picton inquired as to how they might be able to help HPEDSB with some of the challenges they’re facing.

“I think opening your door to me and my organization is a good start. I need allies, on behalf of the board and one of my big objectives in this first year was to reach out and establish relationships where they don’t exist and to identify organizations and partners that share mutual areas of interest,” replied Monteith. “It’s hard to say what can you do other than to be there and be aware of the school needs in the various communities within this district.”

On that note, Monteith pointed out that many are unaware of the poverty-related challenges facing Prince Edward County residents. After arriving from the Kenora district where he was previously posted, Monteith settled and lives in Ameliasburgh.

“I don’t think the rest of the province is aware of some of the poverty and food insecurity challenges in Prince Edward County They have this kind of romantic view that there aren’t the challenges that other parts of the province have,” he noted.