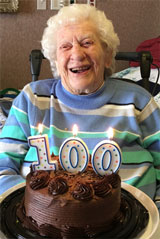 Doris Hunt 1918-2020
My mother was born in Smiths Falls 102 years ago. She met and married Dad while teaching in Hamilton in 1952 and happily followed where he led; to Montreal, Montebello, Lennoxville, Picton and Lakefield. In a moment of emotional candour rare in the Hunt male, he told me in 1985 that he loved her more with each passing year. She golfed with enthusiasm and some prowess, winning the Katchiwano Golf Club ladies’ championship five times. She also played tennis, skied, gardened, and helped Dad make maple s yrup every spring; drawing a unique family label to adorn the highly sought after finished poduct. She sang in the choir, and was the first to bake a pie for a sick neighbour. For twenty years, she and three friends met weekly for bridge, the bloody mary’s as important as the tricks and rubbers. Dad was fond of intoning, after life’s trials and tribulations, “ …but never a word of complaint!”. Mum actually lived by this mantra. In 1967, they discovered that they couldn’t afford the house for which they had been saving for a decade. He later related, in amazed admiration, that while he was devastated, she sat down immediately to design a cheaper house. She rarely allowed herself the luxury of a new coat, but my sister Barb had a horse, and I was never without a new pair of skates. Even when confined to a wheelchair, with one good eye and hard of hearing, she was invariably in good spirits and finding something to be happy about; the view out her window or her delicious Timbit. The family would like to thank the staff, and in particular the PSW’s, of Hastings Manor in Belleville, for their kindness, enthusiasm and excellent care. We knew that you were heroes long before the pandemic made it public knowledge. Thanks also to my sister and her husband, Barb & Jon Wilkins. While I was overseas for 25 years, they were visiting, taking care of bills & doctor’s appointments, and ensuring that Mum could live on her own as long as possible. No one had a more loving and devoted daughter and son-in-law. Cremation has taken place. She will be interred, beside Dad in Lakefield, on their wedding anniversary, June 3.      Ian Hunt