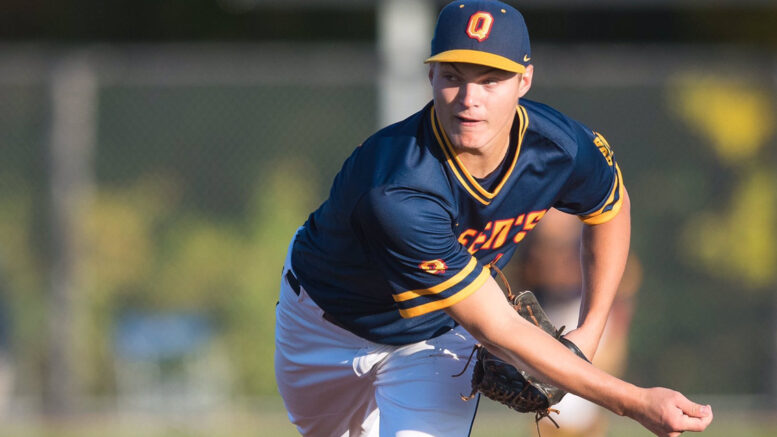 SPECIAL DELIVERY Picton native Gavin Ronan pitched 27 1/3 innings for the Queen’s University Golden Gaels in 2019, posting an earned run average of 3.30. Ronan was selected as the club's MVP for the 2019 season. (Submitted Photo)

Engaging in post-secondary learning can offer any student an opportune chance to learn more than just their major.

And, in Gavin Ronan’s case, learn and develop his place and role on the Queen’s University Golden Gaels baseball team.

The Picton native was recently selected as the Most Valuable Player of the Ontario University Association baseball club after an outstanding 2019 season.

“It was a bit of surprise to be honest,” Gavin Ronan told the Gazette.

Gavin was joined by his brother Will, both alums of the PECI and Quinte Royals Baseball programs, on the diamond last season. Will just completed his first year in the Queen’s Engineering program and both local products had key roles in the success of the Golden Gaels in 2019.

Gavin will enter his fourth season of OUA baseball in the fall and looks to complete his four year degree in urban planning at the conclusion of the upcoming school year.

The eldest of the Ronan siblings was key cog in the Queen’s starting rotation and hit leadoff as a designated hitter at the head of the Golden Gaels lineup.

“There were a few candidates for the MVP award this season but what makes Gavin stand out is that he is our only true two-way player we have on the team,” coach Jeff Skelhorne-Gross told the Gazette “He was one of our two best starting pitchers and when he wasn’t pitching, he was batting at the top of our lineup leading off and hit about .300 for the season.” 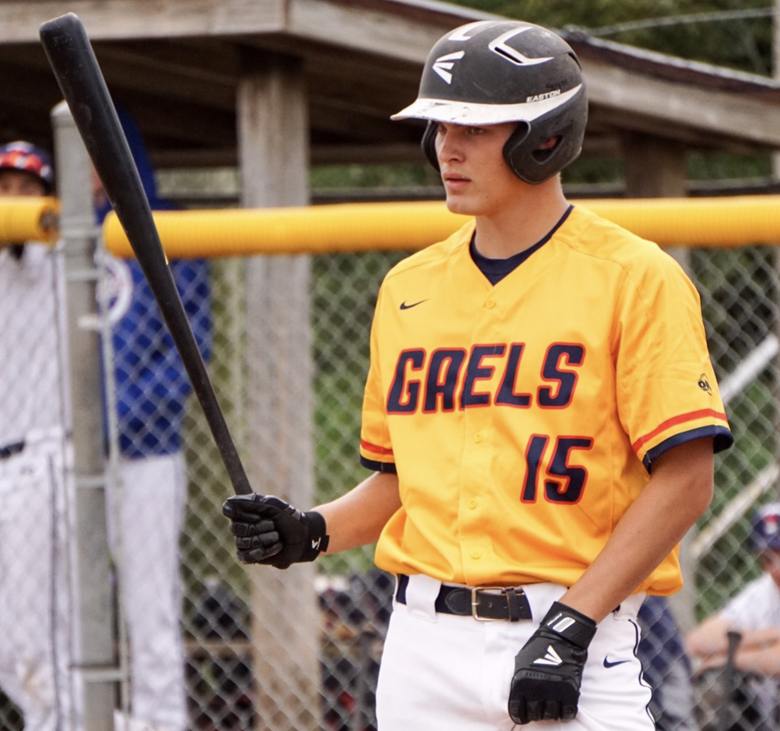 BAT MAN A .300 average from the plate in his third season of OUA baseball ensured Gavin Ronan was hitting at the top of the Golden Gaels lineup in 2019. (Submitted Photo)

From the hill, Gavin threw 27 1/3 innings for the ball club and had an earned run average of 3.30. Highlights from the mound in the 2019 OUA season included a no-hitter in a mercy shortened win over Ottawa University, an outstanding performance against the Ryerson Rams and a playoff win over the University of Toronto Blues.

As a freshman in 2016, Ronan made the club as a backstop but was caught behind some good catching talent. Forced to reinvent himself somewhat, Gavin shed the tools of ignorance and headed to the bullpen.

“What makes Gavin an inspiring player is that he’s gone through times where he didn’t really have much of a role on our team. Going back to his first season, we had a very talented team and it was tough for him to command playing time,” Coach Skelhorne-Gross said. “He earned three starts in 2018 You could see him breaking through and the type of potential he had.”

Skelhorne-Gross said that while Gavin doesn’t throw extremely hard, the Picton Pirate alum has really good movement on his fastball.

“I think he realized he can trust his pitch over the plate instead of trying to nibble on the edges. Once that came around, he really developed his breaking and secondary stuff,” the coach said. “He really made it work and found success with that two pitch mix-he’s got great movement and command of his fastball and he can land the breaking stuff when he needs to.”

In terms of hitting, Gavin isn’t a prototypical speedster at the top of a lineup, legging out swinging bunts and burning up the base paths.

“He doesn’t run overly well but he is a very good fastball hitter and most pitchers want to go right after a lead off hitter with the 2-3-4 hitters behind them. When pitchers get it over the plate for him, he can turn on those pitches and hit for a very good average,” the coach added.

Gavin said he’s always had a penchant for the pitching rubber with his father Matt moulding he and Will into hurlers. In his younger days, Gavin admits he was a raw prospect when it came to throwing from the mound.

“The Royals and minor baseball were a great building block but I wasn’t much of a pitcher, I really learned and developed against OUA batters. I wasn’t really a control pitcher, I was more of a thrower. The last two or three years where I moved out of the bullpen and into the starting rotation where I kind of figured everything out,” Gavin said.

The brothers played one season together at PECI but with Will being a freshman and Gavin being a senior, the two didn’t share a lot of field time.

With Gavin’s dominance on the mound and Will’s emergence as a stopper in Skelhorne-Gross’s bullpen in the latter part of the season, the eldest was able to really watch the youngest of the two grow and develop under the stresses of OUA baseball in 2019.

“It was a great year for me to watch Will and really see him develop as a player and make his way to becoming an integral part of the lineup by the OUA playoffs. If you ask anyone on our team, if there was a Rookie of the Year award, he would have won it by a landslide,” Gavin added. 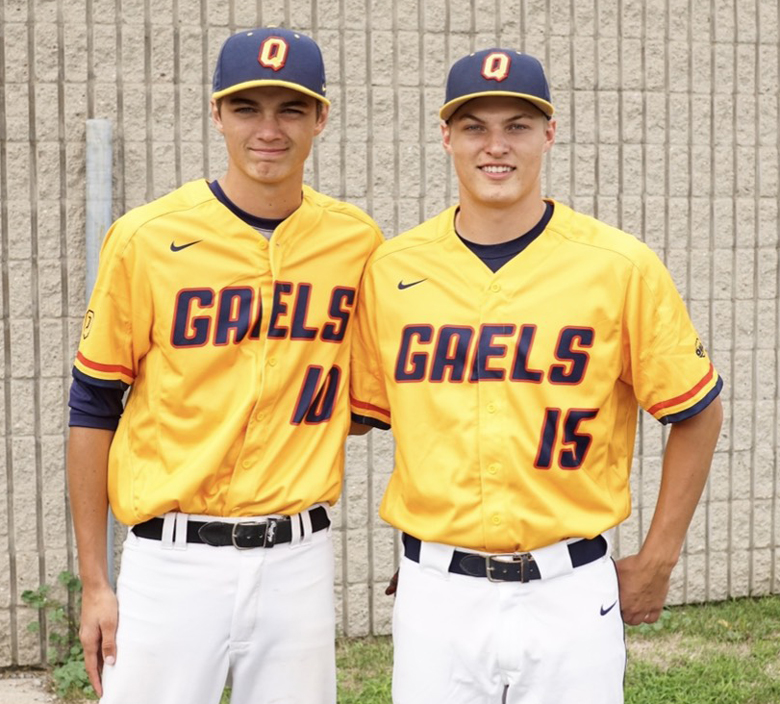 BROTHERS IN ARMS (From Left) Will Ronan joined his brother Gavin at Queen’s University in 2019-20 and the pair had outstanding seasons for the Golden Gaels. (Submitted Photo)

In his first OUA season, Will held his own early on, picking up a no decision in his lone regular season start and then making three appearances in the playoffs, earning a save against York and a hold against Carlton in what the coach said was the biggest defensive stand of the season.

The two had hoped to play in the Kingston Pony league this summer but in the COVID-19 landscape, near future athletic plans are up in the air.

The Queen’s skipper is excited for what the Ronans can bring to the ball club when baseball activities resume.

“Will was an wonderful surprise for us this season. He’s lean and wiry but he’s still growing into his frame. For a player that hasn’t played at this level or against these types of players, Will was able to do things a lot of freshmen can’t. He can land all of his off speed pitches, he’s very deceptive with his changeup and forkball and can pitch away from his fastball when he needs to,” Skelhorne-Gross added. “He’s like a sponge, he soaks up everything baseball and he’s an awesome guy to have in our program. I’m sure he’s going to be part of our starting rotation pretty soon.”

Whenever that is, you can be assured parents Matt and Jen will be in attendance, cheering on the Gaels.

“It’s great family, I know their parents come out and support the Golden Gaels baseball team whenever they can and it’s always nice to have fan support,” The coach said. “I think the best thing this season was that Will really brought out the best in his older brother. You could sense a difference in Gavin as soon as Will showed up at camp. It was really important for Gavin to show Will how to conduct himself on the mound and around the bench. Besides performing, Will really brought out the best in his brother and vice versa.”