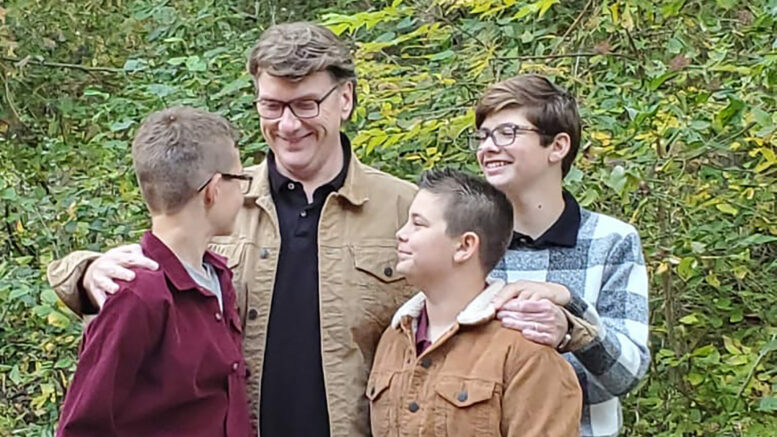 Family and friends are rallying around a Prince Edward County native and 25 year employee of Community Living Prince Edward (CLPE) after he was diagnosed with Stage Four  Cholangiocarcinoma (bile duct cancer). The group have started a GoFundMe page to help cover unexpected treatment costs.

Dennis Markland the youngest child of ten children of  Ron and Joan Markland and was born January 4, 1973 at Prince Edward County Memorial Hospital.

“He was the New Year Baby for Prince Edward County that year,” added his sister Jackie Markland.

Nine years, ago he adopted three wonderful boys, Kade, Britain and Jonathon and has provided them with a life of love, joy and enrichment.

“He is the most amazing man I know, prejudiced as I may be, but he is amazing,” expressed Jackie. “He has shared his kindness and generosity in life with so many people, his love and zest for life is contagious.”

Dennis also devoted over 25 years of his career to advocating for the rights of people with intellectual disabilities at CLPE.

“Dennis is the real deal when it comes to doing what’s right by people and was never afraid to stand up on behalf of others,” added Susan Treverton, Executive Director for CLPE. “He was giving of himself selflessly each day and weathered the good times and tough times with us.  He is one of the most valued and respected leaders we have had the privilege to work along side. The employees who reported to him always felt supported, listened to and cared for.”

In September, with little advanced symptoms, Dennis was diagnosed with Stage four Cholangiocarcinoma, a bile duct cancer which is rare and particularly  rare for a person in their 40’s.

Dennis has been receiving chemotherapy treatment through the oncology department at Quinte Health Care but unfortunately with three different types of chemo tried to date, the cancer has been unresponsive to treatment.

Jackie said the family have been researching alternative treatments.

“We’ve been doing research for alternative treatments for this cancer,” she stated. “Initially we found a clinic in Mexico that offers treatment, but reviewing this with the oncologist it would not be a treatment for Dennis. QHC does have a Immunity Therapy Treatment that could be an option but it’s not funded by medical insurance.”

Due to unexpected costs for such treatments, CLPE and Jackie have started a GoFundMe page to help raise funds to give Dennis the opportunity for a treatment that could extend his life and provide a quality of life that will enable him to share more milestones with his three growing boys.

“The office just isn’t the same without him and his presence missed everyday,” said Treverton. “His sense of humor, his delicious baked goods and the sense of calm he brought are needed back at CLPE.  We believe and know there is an answer out there for him.  As a community it is time to give something back to someone who has given so much to all of us.”

To visit the GoFundMe page and donate please visit https://www.gofundme.com/f/yqnyp-dennis-marklands-believe-team

“Each and everyday I grasp at whatever I can,”Jackie said. “I try and find something that’s going to aide in the recovery of my brother and my best friend.”