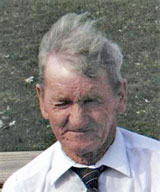 Kenneth Allan “Al” Sponagle passed away at the age of 79 on May 14, 2020, at his home. Originally from New Glasgow, Nova Scotia, Al has been a long time resident of Bloomfield in Prince Edward County. One of eight children, he was the son of late Mona Sponagle (nee Smith) and Arthur Sponagle. Al was a loving husband to Beverley Sponagle (nee Way) and father to Sandra Snell (Todd), Danny Lobb (Donna), Donnie Lobb, Janice Cruickshank (Kevin), Virginia Lake (Jason) and Greg Sponagle (Kayla). He was a proud grand-father to his 15 grand-children and 13 great grandchildren. Predeceased by his son Donnie and granddaughter Gabriella. Al knew how to light up a room, had a wonderful work ethic, loved to dance and told the best stories. He will be remembered with love and missed greatly. A celebration of Al’s life will be held at a later date. Arrangements entrusted to Whattam Funeral Home, 33 Main Street, Picton, ON www.whattamfuneralhome.com