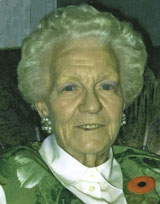 At Kentwood Park Nursing Home on Wednesday May 20, 2020, Kathleen “Tootie” Cole (nee Cox) passed away at the age of 91. Beloved wife of the late Garnet Cole and companion of the late Jim Smith. Much loved mother of Alan (Patsy) Cole of Picton, Daisy Cole of West Lake and the late David Cox and Richard Cole. Loving grandmother of Jesse (Michelle), Garnet (Priscilla), Ryan, Christopher, Lisa Marie, Jeff, Rachel and Trevor and great grandmother of Oliver and Harley. Dear sister of Stan (Lucy) Cox, Angeleen McBean, Donna Thomas, Dianna (Fern) Perrier and the late Jim Cox, Alice (Levio) Benedetti and Betty-Mae (Dick) Ouelette. Adored by her many nieces and nephews. Kathleen was a life member of the Royal Canadian Legion, active member of Picton Br. 78 and past president of Cochrane Br. 15. She was loved and will be missed by her many commrades at the legion. As many of her caregivers said “she was one in a million”. A celebration of her life will take place at a later date and interment will take place in Cochrane, ON. Memorial donations to the Alzheimer Society or the Legion ‘Poppy Fund’ would be appreciated. Arrangements entrusted to Arrangements entrusted to Hicks Funeral Home, 2 Centre Street, Picton. 613-476-5571 www.hicksfuneralhome.ca