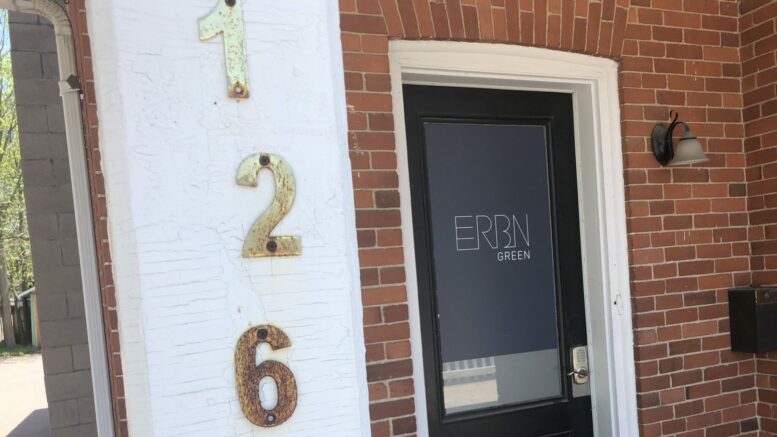 Just in time for the 2020 red and white July 1 celebration, Picton will be going green for the first time in its history.

If all goes according to plan (and there’s no indication there will be a last second snag) Prince Edward County’s first cannabis store front shop will be opening just prior to Canada Day at 126 Main Street in Picton.

ERBN (Pronounced urban) Green is a new age (as new as one can be in the emerging world of legalized cannabis in Ontario) company that looks “To serve the late adopter, canna-curious individual that has had limited exposure to the current offerings of the marketplace” but is inclined to explore.

According to the company’s mission statement, the target demographic is the 40+ female who may not feel comfortable in the traditional “culture” stores however the late adopter can be anyone and engaged customers do not  have to be determined by age, only a mindset.

In terms of licensing, all applications for cannabis sales and storefronts fall under the purview of the provincial government’s Alcohol and Gaming Commission of Ontario and the company has completed the 15 day public notice period and the estimated opening date of Saturday, June 25 remains in place.

ERBN Green is developing a national footprint with two immediate store openings in late June-the aforementioned Picton store on June 25 and a midtown store opening in Toronto at Yonge and Lawrence five days prior.

The company plans to unveil a flagship facility in Toronto on Dundas St. W in mid-July and a store in the Mountain area of Hamilton in September. Outside of Ontario, stores in Alberta and British Columbia are in the works.

ERBN Green was co founded by serial entrepreneurs and partners Sherri MacDonald and Dianne Corner who developed and ran their own successful securities investigation firm for well over two decades before retiring from that business a few years ago. 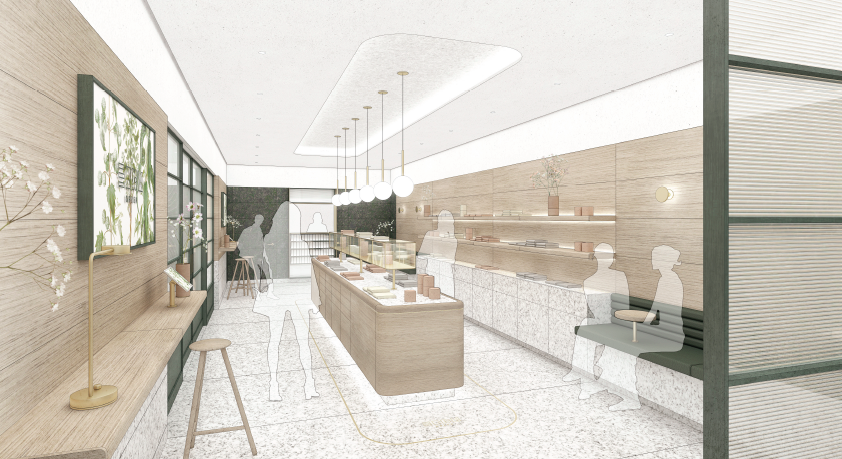 An artist’s rendering of the interior of ERBN Green. (Submitted Photo)

MacDonald serves as President while Corner is the Chief Operations Officer and it was the former who said the company felt strongly about this market and this community when the concept of ERBN Green was being developed.

“We first visited  Prince Edward County several years ago and, like many others, fell in love with it, Picton specifically. We really loved the vibe and the eclectic mix of people, both locals and ‘out-of-towners’. When we started planning ERBN Green, we knew Picton would be on our list. We are very excited that we will be the first cannabis store in Picton and that Picton will be one of the first two ERBN Green stores to open this summer” MacDonald said in a statement.

The Modern Market will open later this summer and consist of modern lifestyle offerings including Cannabis accessories not covered by Ontario’s Cannabis Act including interesting and innovative products cannabis-related items such as hemp seed oil, textiles, housewares and art crafted by local artisans.

While cannabis has been readily available in store front settings for some time in the region, what ERBN Green aims to do locally is engage those that wouldn’t typically step foot into those traditional cannabis retailers on Tyendinaga.

“We see it as all cannabis stores are working together with the goal of making cannabis normalized and destigmatized. We are all working to broaden the overall market,” Young said. “Remember, who we are targeting is the curious late adopter, although we appeal to everyone. we are trying to create a curated experience at ERBN Green.”

Young likened the early days of legal cannabis sales at brick-and-mortar shops as to those of the times at the LCBO where paper forms were submitted to a clerk and customers only handled items after they were purchased and inserted in a nondescript paper bag.

“In many ways, we are looking at cannabis through that type of lens. You can’t see into the store, there’s age gating, and there can be some store restrictions that can be intimidating and off-putting to a person who is curious because they’ve seen and heard about all of the really interesting medicinal and therapeutic benefits of cannabis,” Young explained.

Young explained ERBN Green is approaching the marketplace with a different approach than what’s been tried in other corners. Most new companies expect their potential customers embrace and swallow the ‘stoner’ culture hook line and sinker.

“We are taking the opposite approach. We view cannabis as part of more modern living and something that a person can explore-or not explore,” Young added. “We are not encouraging everyone and saying ‘hey, this is for you’, we are saying that if you are curious and want to explore on your own terms and look at making this part of your life, we are here.”

Farrell added that one of the first aspects in development of ERBN Green by MacDonald and Corner was to ensure the in-person sales platform was safe and secure while also welcoming to those who might be exploring cannabis for the very first time.

With an eye towards a national foot print, Farrell explained ERBN Green was investing in markets across Canada that have an expanded tourism and hospitality sector and that’s also part of the aforementioned reason why a store front in Picton is days away from opening.

She added the success of local winery, brewery and distillery sector in Prince Edward County is clearly evident and when it comes to cannabis, tastes-much like in the beverage industry- are differing.

“We have a developed an identification system for cannabis that hinges on taste profiles which is something that people who are wine connoisseurs can relate to,” Farrell told the Gazette. “We are really hoping to draw those parallels between wine and cannabis when it comes to differentiating tastes.”