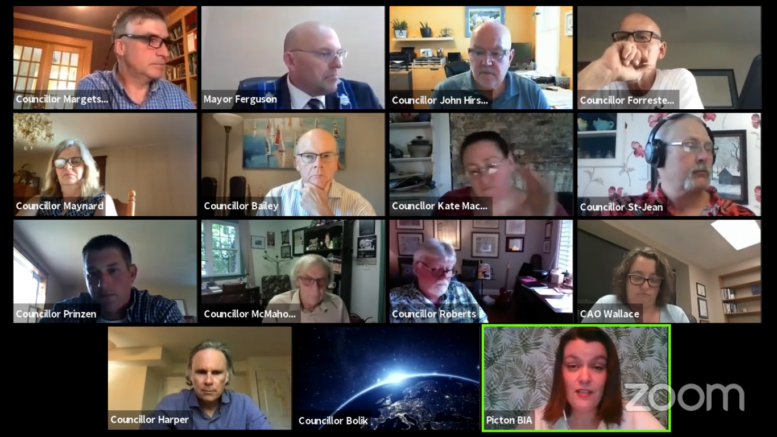 A request to have free parking in Picton’s downtown core for the rest of the year has been deferred pending a staff report on the economic impact of such a measure.

At the Regular Council Meeting Tuesday evening, Picton Business Improvement Association (BIA) Manager Sarah Doiron made a plea to council to extend free parking in downtown Picton for the remainder of the year. Doiron argued parking should be free for the rest of 2020 in order to help support local businesses during this financially precarious time.

Doiron began by acknowledging how contentious the issue of parking is in this community.

“In my two and a half years of working for the BIA, I have come to understand what a contentious topic parking is for our members and the community at large,” said Doiron.

Free parking in Picton has been extended from March 31st until June 1st. However, before that time, Doiron points to serious issues around parking meters in Picton. In fact, before the pandemic struck, the BIA had undertaken an initiative to collect written feedback from customers during the month of February about their personal experiences in using the parking meters in Picton.

At the time, the BIA issued hundreds of hard copy forms outlining issues with parking as perceived by members of the BIA.

These hard copy responses were to be gathered in early March with a subsequent deputation to council, in hopes of finding solutions to the following issues: Free parking is not obvious; The Public has difficulty finding and using parking meters; Meters don’t print or they malfunction; There is no signage indicating paid parking at the north corner of Elizabeth and Main; No grace period and Local residents feel alienated and less likely to come downtown Picton.

“I want to mention that the members of the BIA were appreciative when free parking was extended from March 31 to June 1. It was a positive gesture from The County that was well received,” said Doiron.

Doiron is hopeful that along with extending free parking, council will continue to enforce the maximum two hour parking limit.

“After conducting a survey of our membership last week, 85 per cent of the 50 respondents answered that they were in favour of the extension of free parking,” she asserted.

In speaking to this, Councillor Mike Harper suggested it might be helpful for Doiron to shed some light on the impetus behind extending free parking and the importance of seasonal shoppers for downtown businesses. Harper has worked with Doiron for the past eight weeks as part of the newly formed Economic Recovery Task Team.

“You and I have worked together the last eight weeks and I thought it might be helpful if you could just shed a little more light on the magnitude of COVID-19 and the impact for seasonal businesses on main street,” said Harper.

Though the impact of the current health crisis may yet be visible, noted Doiron,there are many who will face a precarious future should the summer season not prove as fruitful as in years past. This is apart from those who are already struggling to survive.

“What we’re looking at is we’ve seen the short term impact of COVID-19 on businesses. They’re scrambling to pay their rent and meet all their other financial obligations,” explained Doiron. “But now we need to turn towards the long term and what those impacts are. Many of the businesses are seasonal and depend on the summer season to pay most of their bills throughout the year. We haven’t seen a lot of businesses close their doors yet but if they don’t see a bounce back during the summer and support from the community, there is a good chance many of these businesses won’t survive next winter.”

Councillor Janice Maynard spoke to the issue of maintaining two hour limit enforcement without any revenue and the cost that would pose to the municipality.

“If the BIA is asking we forgo the revenue for a period of time, would you be able to support us balancing the books, because we still need enforcement without the revenue,” she said.

Doiron pointed out that, without enforcement, there could be those who would park on Main Street all day, which is opposed by many BIA members.

“I think it’s important to our members that enforcement remains, as many people are tempted to park their cars on main street all day, which would negate the purpose of having free parking,” said Doiron.

The BIA Manager added the meters themselves, when malfunctioning, are known to illicit a “passionate response” from people and that alleviating this stress at such a precarious time would be in the municipalities best interest. “It’s in our best interest not to ask them to use those in such precarious times,” she said.

In the same vein as Maynard, Councillor Andreas Bolik questioned who would be left on the hook for the lost revenue and posited that taxpayers would be the ones having to pay.

“One of my concerns is, if we are to continue enforcement we incur those costs and parking is a revenue neutral activity for the County. Tax payers are going to have to be paying for that,” said Bolik.

In response to financial considerations for taxpayers and the municipality, Councillor Phil St. Jean suggested a staff report on the financial impact of continuing free parking.

“I would like to ask for a staff report on the financial impact as I think that’s what most people are concerned about at this point,” he said. Doiron’s deputation suggesting free parking be extended in downtown Picton was passed as a St. Jean/Kate MacNaughton motion. The matter is expected to brought forth at an upcoming meeting along with the accompanying staff report.