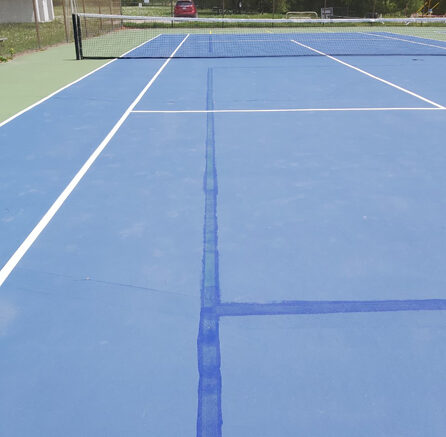 The lines inside the tennis court to indicate the pickleball court have been painted over, making them difficult to see. (Submitted photo)

Pickleball season in Bloomfield will be held up this year due to vandalism at the courts.

The Bloomfield tennis and pickleball courts on Brick Street had the pickleball lines painted over either last Fall or early this Spring, making them almost invisible. The tennis lines were not touched. The person or persons responsible have not yet been identified. This vandalism has been reported to the County and the local OPP.

The County had refurbished the tennis courts in Wellington, Bloomfield and Picton two years ago at considerable cost, adding a new playing surface as well as adding lines for pickleball. Now, additional tax dollars will be spent to repaint the pickleball lines on the Bloomfield Court. Defacing the Bloomfield courts will create a shortage of courts available for players. Both the Picton and Bloomfield Recreation Committees use the Bloomfield courts all summer long. Now until the lines are repainted, pickleball will not be played there. The Picton Recreation Committee continue to use the Benson Park courts in Picton.

If anyone has any knowledge of the person/persons responsible for this vandalism, please notify the Prince Edward County Recreation Department, the OPP, or any member of the Picton or Bloomfield Recreation Committees.