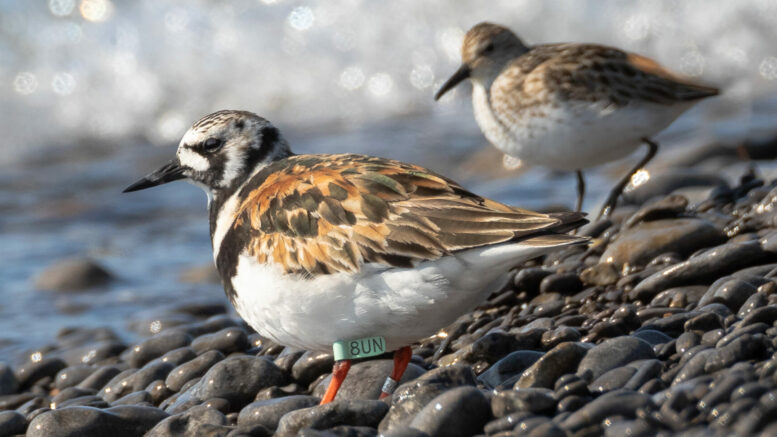 LOCAL LAYOVER A Ruddy Turnstone with a numbered tag on Charwell Point at the Athol/South Marysburgh boundry late last month. The migratory sandpiper was tagged in New Jersey in 2012 and is presumedly en route to arctic nesting grounds. (Paul Jones photo)

The Canadian border is not closed to all U.S. air traffic.

Late last week, County bird watcher Paul Jones was pleased to find a flock of northbound Ruddy Turnstone – a type of migratory sandpiper – resting at Charwell Point on Prince Edward County’s rugged south shore. He was even happier that one of them was showing off a numbered tag, meaning the bird’s travel history could be traced.

Jones’ report is the first time the tagged individual has been seen outside of the U.S.; and helps trace the species’ path between its arctic nesting grounds and the warm southern coasts where it spends the winter.

Terry Sprague, the dean of County bird watching says the record is a celebration of the wonder of bird migration, but also underlines the contribution ordinary people can make to science.

“These small birds travel thousands of kilometres on dangerous journeys every spring and fall. Their ability to precisely navigate and overcome all manner of hazards is astonishing,” said Sprague, a retired Picton Gazette columnist “By noting down and reporting such sightings, amateur bird watchers can make an enormous contribution to our understanding of these bird’s travel routes, habitat requirements, and population levels.”

For Cheryl Anderson, Board member of the Prince Edward Point Bird Observatory and the South Shore Joint Initiative (SSJI), the turnstone’s travels emphasize the importance of the County’s remote shorelines to wildlife conservation.

“With Point Traverse closed to birdwatchers this spring, folks looked to other areas to explore, including Charwell Point,” said  Anderson “Their observations, such as this turnstone sighting, confirm the south shore is a crucial resting area for birds making the dangerous flight across Lake Ontario.”

To protect this special habitat, Anderson and the SSJI are pushing for “Conservation Reserve” status for the Ostrander Point Crown Land Block and the Point Petre Provincial Wildlife Area.