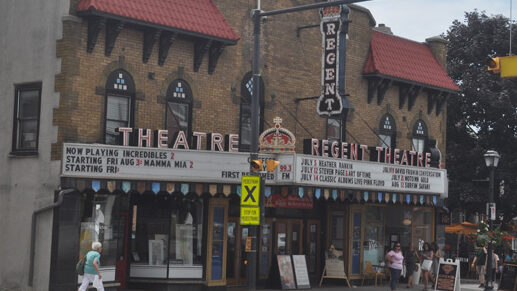 Picton’s bastion of entertainment since the Vaudeville era is no stranger to hardship, but COVID-19 closures have proved to be particularly challenging to the historical Regent Theatre. Alexandra Seay, Theatre Manager, spoke to Prince Edward County Council at Tuesday’s virtual meeting, urging them to consider investing in a hybrid programming model.

The proposal was ultimately referred to staff for a report due back at the June 23 Regular Council Meeting.

In her presentation, Seay stressed the need to “pivot” thinking about the Regent-it being not just an entertainment venue but also a community and cultural hub.

The hybrid programming model proposed by Seay would allow for a broader audience while, hopefully, offering more to the community at large.

“The other aspect of this is the ability to now function as a community resource, so if we have the equipment there’s no sense of us sitting on it when we’re not using it,” said Seay. “We might as well give back to the community and make it available as a resource that it extends far beyond the arts community.”

Seay also suggested the possibility of live-streaming events that have the allowable maximum of attendees. Though the live event would have a limited audience, it could be live-streamed to a satellite location, e.g. The Mustang Drive-In.

“A community hub is a space that provides access to the full community, I mean the County and beyond. What we’re proposing is to introduce a hybrid programming model that allows us to build our capacity through equipment and investment in expertise to enable us to live stream content,” explained Seay. “So yes we have a theatre, we will have live events and live audiences, albeit a limited audience, and to that we add the ability to live stream content and the ability to live stream to a satellite venue.”

Not mincing words, Seay noted that in order to survive, the theatre must make changes in the wake of the pandemic.

“If we do nothing to pivot our programming or generate more revenue we will die. By the end of September this year, the Regent will not be viable,” Seay stated.

Even before the current health crisis, Seay noted the theatre was a rarity among non-profits. Not only do they own and operate a heritage building but they receive no operational funding from the federal or provincial entities.

Normally, the Regent would have applied for the County Community Grant, which has been suspended due to COVID-19. With that in mind, Seay requested council consider a comparable amount of $40,634.

As she pointed out, the fact the Regent is still running is a testament to their security. However, Seay noted that is “not infinite.”

Not surprisingly, Seay described the lion’s share of the new programming would be equipment itself. However, the Regent would also have to pay someone to facilitate the programming throughout the year. And, they must conduct marketing to accurately express how the Regent has changed, what they’re providing and how they’re doing so safely.

Councillor Kate MacNaughton enthusiastically supported the proposal, but asked for clarification as to the desired outcomes of the Regent.

“I’m hopeful and excited. To be clear, you are looking at a pivot toward being a local content producer? And that would that be something that local arts groups cultural content creators, the high school, everyone would have access to,” she queried.

Seay responded affirmatively, adding that “partnering with local artists and organizations is a crucial part of this.”

Playing the devil’s advocate, Councillor Bill Roberts inquired as to how the Regent would differentiate itself form other community hubs, such as the library and the old Picton fire hall.

“How does this community hub differentiate from those other spaces,” he asked.

Several members of the public spoke in support of the Regent’s proposal. One such member was Krista Dalby, Executive Director of the Department of Illumination and the Arts Representative for the Mayor’s Economic Recovery Task Team.

“We all know that the regent is so much more than a movie theatre. This historic building is truly one of the county’s greatest cultural assets. Transitioning to an even more vibrant community hub by expanding their offerings will ensure that this main street icon can remain vital with year round programming to serve locals and tourists alike as well as providing opportunities to local artists and community groups,” Dalby expressed.

“While the days of mass gatherings are curtailed for the present,” Dalby continued, “It won’t be forever and when life returns to some semblance of normal we must ensure that the Regent’s marquis is brightly lit.”