You pick the adjective, there were a multitude of ways to describe Prince Edward County’s response to the global protests and demonstrations calling for the end to systemic and legacy racism that’s plagued society since the start of recorded history.

The gravity of standing en masse mostly silent and then laying down on the sidewalk for a full eight minutes to mark the same amount of time that disgraced Minneapolis police officer and alleged killer Derek Chauvin knelt on the neck of George Floyd, leading to his slow and painful death can scarcely be recounted and described in this space nearly a week afterwards. Floyd’s demise at the hands of a police officer has served as a flash point in this latest ignition of racial unrest and led many to call for a whole sale change in the way we look at policing our communities in the 21st century.

The evidence of history-long past and recent-makes it crystal clear-systemic racism has entangled and been ingrained in how some officers, detachments and forces approach the job of policing in North America and this failure must be addressed and fixed if nothing else.

The wording of the most recent slogan that a number of protestors have taken up- Defund the police- may or may not lend credence to what the mantra actually means, at least according to most of the verbiage being tossed around and this corner’s understanding of this particular aspect of the movement.

But reforming police directives and focussing on community safety with all stakeholders in mind where everyone participates in the discussion equally is a good starting point.

Local police forces have become the catch-all for far too many issues in this and other communities. One of several pressing concerns if your are looking at policing in Prince Edward County is the way OPP members are pressed to deal with citizenry with dire mental health issues.

In this practice, the police are akin to a safety net long after a person has been swept over the waterfall that serves as the breaking point between good and poor mental health. Redirecting funding to provide supports upstream so that many of our friends and neighbours can cope better, reset their lives and reimagine themselves is a good conversation to have.

But ultimately, that is but one suggested starting point to be absorbed or rejected when the time comes for deep and meaningful discussion on how society proceeds from here because the number one goal that needs to be accomplished as a result of all these protests and demonstrations is this: People in all walks of life, in all parts of the world need to listen. to people of colour and acknowledge what is being said. Full stop.

Racialized people from across the world are calling on everyone to halt with the platitudes and finally listen to those that have been caught up in a system that was never designed to suit them and, in many, many cases, created to keep them from succeeding.

And it’s not lost on the Gazette that part of Friday’s protest took place in the shadows of a bronze representation of the architect of the Canada’s heinous Indian Act and the catalyst to the ruination of generations of indigenous lives. Thankfully, some protestors hung an Indigenous Lives Matter placard on the statue of Sir John A. Macdonald lest anyone thought his visage would “hold court” over the protest without a response.

The loss of George Floyd is tragic is devastating no matter how it’s classified but the real tragedy in the last two weeks of civil protest would be if his death didn’t bring about positive change and the halting of systemic racism. 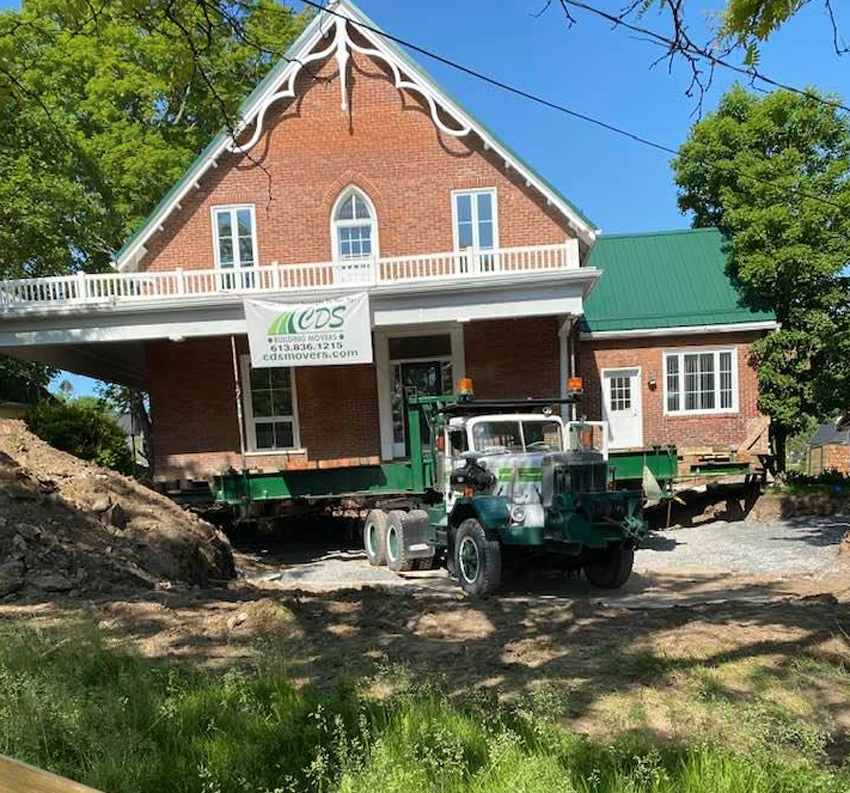 ON THE MOVE – Staff with CDS Movers, an Ottawa-based company that relocates heritage buildings, was in Prince Edward County on Tuesday morning to relocate the historic Taylor House from its perch overlooking Picton Bay to a nearby foundation. (David Fox for the Picton Gazette)