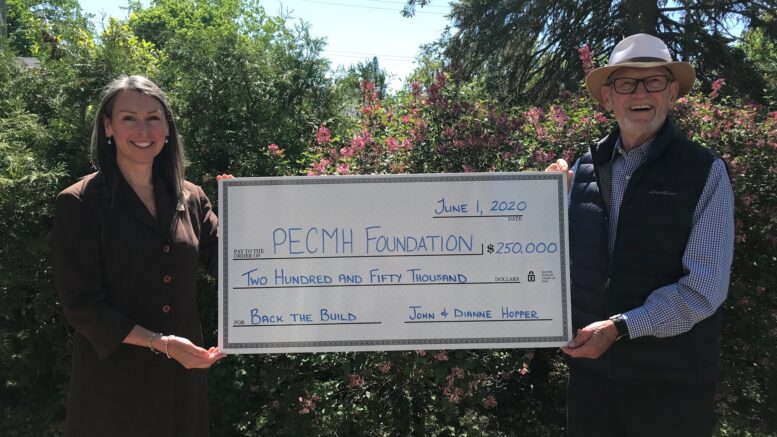 Prince Edward County Memorial Hospital Foundation Executive Director Shannon Coull accepts a pledge of $250,000 from John Hopper on behalf of he and his wife Dianne (not pictured) (Submitted Photo)

A retired Sophiasburgh couple who made their professional mark in the community of North Bay have made a major donation of the redevelopment of Prince Edward County Memorial Hospital.

With a strong belief in being philanthropic leaders and supporting health care in their community, John and Dianne Hopper  have stepped forward with a five-year commitment to help Back the Build for a new hospital in Prince Edward County.

“We believe PECM Hospital is one of the most important organizations in our community. The health and wellness of our family, friends and fellow residents relies on the resources at the hospital. Dianne and I want to do our part to show how fortunate we are to support the building of our new County hospital. It is our hope that everyone in Prince Edward County will help Back the Build so the medical staff can continue to provide exceptional health care close to home,” said John Hopper.

Prior to their time in the County, they lived in North Bay and owned and operated for 48 years Hopper Buick GMC, a franchised General Motors dealership, that John established in 1971. John and Dianne’s son, Stuart, now owns the dealership. No stranger to fundraising campaigns and new hospital builds, John served as chairperson of the campaign cabinet for North Bay’s first new hospital build over 19 years ago. He and about 60 volunteers were able to raise $7.2M for the new North Bay Regional Health Centre.

John put his fundraising experience to work shortly after he moved to the County, leading the successful fundraising effort which put 99.3 County FM on the air, and serving on the station’s board for the first two years of broadcasting. He currently serves as a new board member for the Recreation Outreach Centre (ROC) and is an active member of St. Mary Magdalene Anglican Church.

John’s name is still well known in junior hockey circles as he served as Owner, President and Governor of the North Bay Centennials in the 1980’s and early 90’s. During ‘Hoppy’s’ involvement in the Ontario Hockey League, John employed the late and legendary Bert Templeton as bench boss and saw future NHL’ers such as Darien Hatcher, Vitali Yachmenev and Troy Crowder star for the Cents at the North Bay Memorial Gardens. His junior hockey tenure culminated with the 1994 OHL Championship and an appearance at that year’s Memorial Cup in Laval.

In addition to their pledge to Back the Build, the Hopper’s have committed a transformational gift in their estate plans including a clause to fulfill their pledge if they were to pass away before the gift is realized. The Hopper’s encourage others to consider a legacy gift to the Prince Edward County Memorial Hospital Foundation.

“A planned gift is an investment in our community for future generations,” said Dianne Hopper. “There is truly no other place a legacy gift will have such an impact on our entire County. Health care is our most precious resource. That’s why this campaign for a new hospital is so important. It comes down to ensuring that quality care is available locally to every family and individual within our communities.”

The Hoppers believe building a new hospital for PEC is about investing in the health and wellbeing of our citizens and visitors and ensuring we all have access to the best possible medical care for generations to come.

“Hospitals have always been one of the areas I feel reaches everybody. They care for us throughout our lifetime. Hospitals meet the needs of an awful lot of people and a large percentage of the population require use of a hospital. Some people are born with health issues, some develop them later in life,” John said. “When we were building the new hospital in North Bay, we saw a positive attitude change amongst the permanent residents in the community. The hospital is a huge part of this community and we want to see Prince Edward County benefit from a new facility.”

The Hopper’s stressed how important it is to have access to a hospital that is built and equipped to meet the health care needs of today and in the future.  With state-of-the-art design and infrastructure, the new PECM Hospital will offer the same services as today in a better space that can accommodate today’s standards of practice. The emergency department will be equipped with the latest technology and staffed with our skilled and dedicated health care professionals. Inside its walls will be a suite of clinics to provide, among other medical services, endoscopy and dialysis treatment. And it will have 18 inpatient rooms, each equipped with its own washroom.

“This generous gift brings us another step closer to building a new hospital. A hospital our community needs. We’re grateful for John and Dianne’s contribution and community leadership,” said Shannon Coull, executive director of the PECMH Foundation. “Our entire community has been focused on getting through COVID-19 which is important and this gift reminds us that we need to keep moving forward. We still need a new hospital and we still need to keep it equipped for patient care. Our entire community is benefitting from this donation as well as all of the other donations we have received and will continue to receive.”

“Today’s announcement is a major step forward. We are grateful to John and Dianne for their leadership, generosity and commitment,” said Nancy Parks, Back the Build campaign co-chair. “The Hopper’s are philanthropic leaders and our new hospital will stand as a testament to their inspiring legacy of unwavering support for this project. This gift will make a significant impact on our community for years to come and will hopefully inspire others to step forward to show their support.”

“As co-chair of the PECMH Foundation’s Back the Build campaign, I am in awe of the generosity of this community,” said Dennis Darby, campaign co-chair. “We have well surpassed the $11M mark and we are very confident we will reach our goal. “Building this hospital is about investing in the health and well being of our citizens and ensuring we all have access to state-of-the-art health care. We are grateful for the gift from the Hopper’s and are excited about getting closer to opening the doors to our new hospital.”

Based on current projected timelines, the new hospital construction will be completed in 2025.

“Today’s gift announcement recognizes the spirit of generosity that is evident throughout our County. Our compassionate residents and businesses are committed to advancing health care for the people of Prince Edward County and the patients of our hospital,” said Coull. “Our donors safeguard, improve and elevate the quality of care our community receives at this hospital. I would like to express my sincerest gratitude to John and Dianne for their selfless, thoughtful and generous contribution to the PECMH Foundation.

“Partnering with the PECMH Foundation is a natural fit for Dianne and myself. We look forward to seeing the lasting legacy this gift brings to our community,” said John.