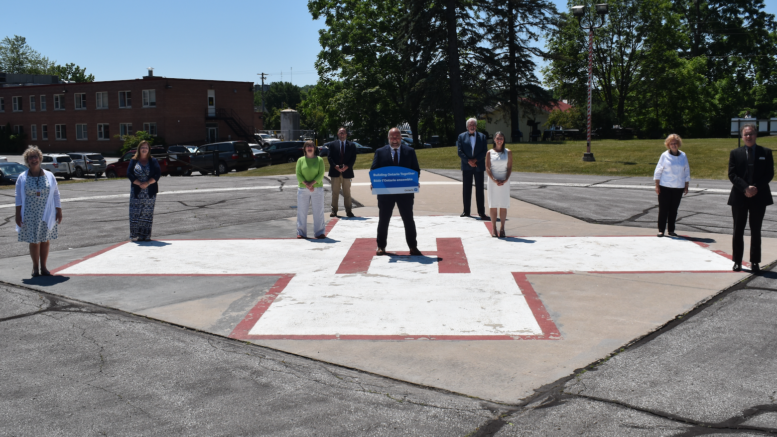 Another hurdle in the process of seeing a newly redeveloped Prince Edward County Memorial Hospital adjacent to the current facility on lands bordering McFarland Drive and Main has been passed.

Bay of Quinte MPP Todd Smith joined with dignitaries from Quinte Health Care and the Prince Edward County Memorial Hospital Foundation at the rear of PECMH under the pine trees near the helipad to make a monumental announcement about the future of the redevelopment project.

Smith announced that Minister of Health Christine Elliott had approved QHC’s Stage 2 functional program submission and is allowing the bid for a new PECMH to progress to Stage 3.1.

This next stage which is part of the Ministry of Health’s Premlinary Design Development calls for a Block Schematic Report at Stage 3.1 and, eventually, Sketch Plan Report at 3.2.

Smith said the approval would allow QHC to begin detailed planning and design work for a new hospital, which would included 18 inpatient beds with space for five more, a 24-7 Emergency Department, diagnostic imaging, a surgical suite, dialysis and ambulatory care. 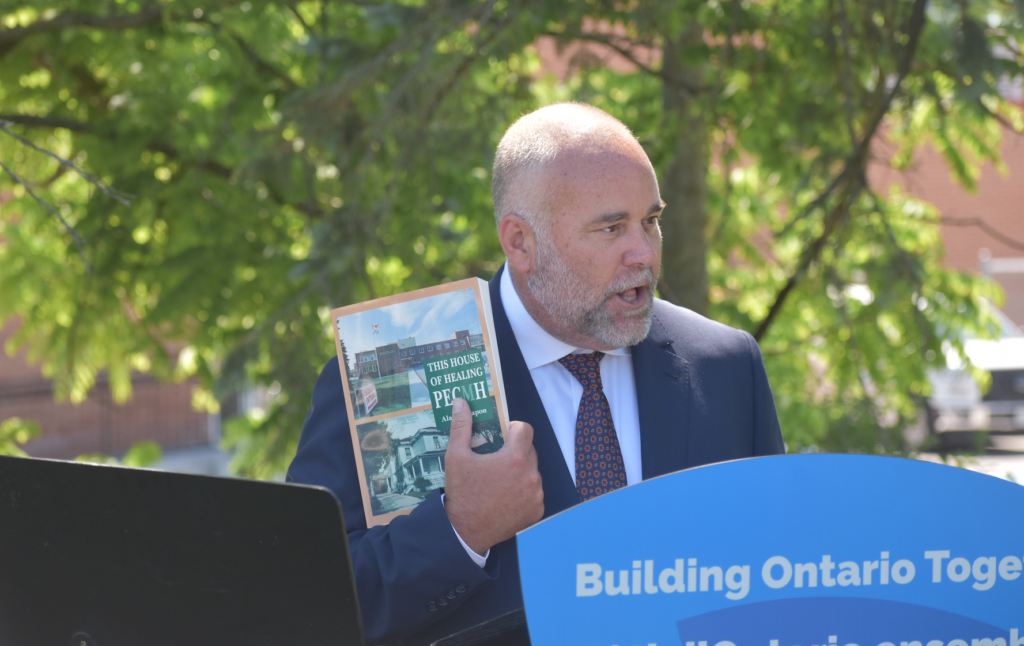 The plans call for this new facility to be built northwest of the existing structure but on the same site.

“Our government recognizes the need to build a modern, full-service hospital for Prince Edward County and we are satisfied by the extensive planning done by Quinte Health Care and the enthusiasm from the community to back the build,” said Smith.  “Today’s approval to begin detailed design work offers terrific momentum to push this project forward toward breaking ground.”

“Building a new Quinte Health Care Prince Edward County Memorial Hospital represents an outstanding collaborative effort reinforced by the unwavering support of this community. Our planning team, comprised of staff, physicians, and community partners, are extremely grateful that the Province has given us the green light to move forward,” said Harrington.

Harrington said the next phase of redevelopment would allow QHC to examine the layout of the facility closely, considering the overall layout, where rooms will be located, and the functionality of each space.

“Our team is eager to get to work as we take a momentous step toward building a new hospital to serve the residents of Prince Edward County today and into the future.”

Barbara McConnell, the Chair of the Prince Edward County Memorial Hospital Foundation said the approval “gives us confidence that we will have our new hospital in the county.”

McConnell described the build as the biggest project her community has ever taken and she expressed gratitude to the many contributors who brought the redevelopment to its current stage.

“We would not be here today celebrating this good news without the help of so many essential partners: QHC’s leadership team, Bay of Quinte MPP Todd Smith, the County of Prince Edward, the Prince Edward Family Health Team, the PECMH Auxiliary, our campaign cabinet, our foundation’s board of directors and staff, and most importantly, our donors,” McConnell said. “Every day, we see the powerful ways that our donors have an immediate and lasting effect on the way our community hospital delivers health care.”

According to McConnell, the PECMHF has raised over $11.3 million in pledges toward the community’s $16.5-million goal. She encouraged those who have pledged or who will pledge to donate.

“As you can see, we have a lot of work ahead before our hospital is in place, and with this news, we are eager to get started.”

Smith said the Province has demonstrated it is eager to support QHC services in Prince Edward County and at all of its sites, reiterating that Ontario has committed to stabilized annual funding for the multi-site hospital, including a 6.1-per-cent increase in base funding for 2020-2021.

“We will take every measure to ensure Ontario residents – including those in rural communities like Prince Edward County – receive the health-care services they need to stay safe and well,” he said. “This year alone, we’ve invested $3.3 billion more in health sector. Beyond that, our 10-year capital plan envisions $17 billion in investments to build new, state-of-the-art hospital capacity, including important projects like this one that means so much to our community.”

Already a beautiful and welcoming community to live, having a new, state-of-the-art  facility within which to treat patients will obviously enhance PEFHT’s chances to recruit new members.

“We’ve been blessed because of where we live to be able to recruit and build on that compliment of collaborative and cohesive collection of physicians that have been very supportive of the hospital and each other. The ability to recruit new members with a new hospital in Picton will be made that much easier,” Christie told the Gazette. “We won’t be showcasing a tired facility with some limitations, we will be offering a safe, effective state-of-the-art facility in which we work and provide the top notch care to our patients.”

The ‘House of Healing’ has served the residents of Prince Edward County throughout the six plus decades it’s been in operation and many physical upgrades has ensured that primary care and some secondary care and ongoing treatments such as endoscopy, dialysis etc. have been offered at high quality levels.

But no matter how much the building has been upgraded, best and modern medical practices have far eclipsed the ability to modify a building built in 1959 to follow suit.

“Medicine is practised significantly different today than it was when PECMH was built. Back then, this building had multiple four bed wards which we don’t use anymore. We have a lot of double rooms and in the new facility we will have single rooms and every patient will have their own bathroom,” Christie said. “The ability for all the staff-doctors, nurses, PSWs, dietary staff and cleaning staff to do their job and do it safely for both themselves and the patients will be light years better. All of the new infection control provisions that will be in place will be so much better and that’s key if, god forbid, we are faced with another pandemic.”

What the new PECMH will look like and how it will serve the community has always been a wrinkle that healthcare watchers in this community have been keeping a close eye on. Concerns that a new hospital wouldn’t meet the needs of this aging population and the influx of summertime visitors that cause the local population to swell are warranted when it comes to healthcare dollar investment especially when these ultimate decisions are made far away from Prince Edward County.

But so far, the PEFHT are “OK” with what if being proposed.

“Right now we are often surging up to 18 beds so the actual number is often a moving target of what we need. It feels like an OK number at the moment and there’s that ability to expand it with an additional five beds and I wouldn’t be surprised if, by the time we are into the build, that we are planning on adding those five beds already,” Christie added. “We are progressing in all kinds of ways with regards to advancing home care and the pandemic has shown  how important it is to provide sophisticated, high level care in people’s homes to keep them safe from sharing infection. With good at home care, with good planning and management and good long term care facilities here, we are ok with the numbers.”

In his remarks, County of Prince Edward Mayor Steve Ferguson hospitals are cornerstones of communities and commended the healthcare planning partners and the province for advancing the development project forward.

After the presentation, the Mayor said the current pandemic highlighted the need for high quality healthcare close to home and added the change in behaviours and everyday practices globally could have an impact locally.

“As we as a society, we are learning that people are quite comfortable working from home and for some, home is Prince Edward County and they don’t need to go into the office in Toronto or Montreal or where ever. We may see some of the effects of that more permanent migration out here to the County and more full time residents illustrate the necessity of providing up-to-date healthcare that much more critical,” the mayor said. “This pandemic and change in common practice could springboard the shift telecommuting for a lot of people and now those with second homes in Prince Edward County could work from home and be here full time. It puts pressure on us because we have to up the ante with regards to bring high speed internet to more areas in the County.”