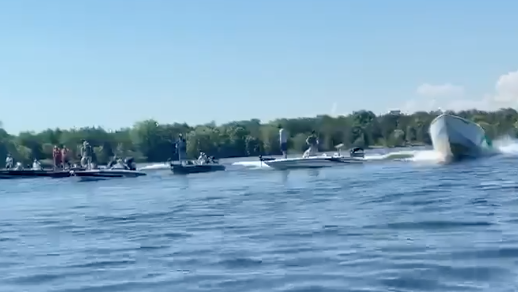 A power boat veers past a number of fishing vessels at Sandy Cove on the Bay of Quinte in this screen grab of a video posted on social media. Prince Edward OPP are looking for further information in relation to this incident. (Facebook screen grab)

The Ontario Provincial Police (OPP) Prince Edward County Detachment responded to a number of calls for service over the course of the weekend. The calls varied in nature but included the following:

On Sunday June 21, 2020 just before 1:00 a.m. officers responded with Hastings Quinte EMS and Prince Edward County Fire and Rescue to a motor vehicle collision on County Road 25. Upon arrival, officers observed the vehicle had left the scene after colliding with a hydro police causing the hydro lines to fall. Further investigation revealed the operator of the vehicle to be a 37 year old male from Prince Edward County who was subsequently charged with careless driving, fail to remain at the scene of a collision and fail to report a collision under the Highway Traffic Act.

On Sunday June 21, 2020 officers were notified of a vessel attempting to swamp other vessels on the Bay of Quinte near Sandy Cove. Reports stated the vessel was boating erratically. The Prince Edward County Detachment of the OPP are asking anyone who may have photos or videos of the incident to contact police at 1.888.310.1122. Should you wish to remain anonymous, you may call Crime Stoppers at 1-800-222-8477 (TIPS), where you may be eligible to receive a cash reward of up to $2,000.