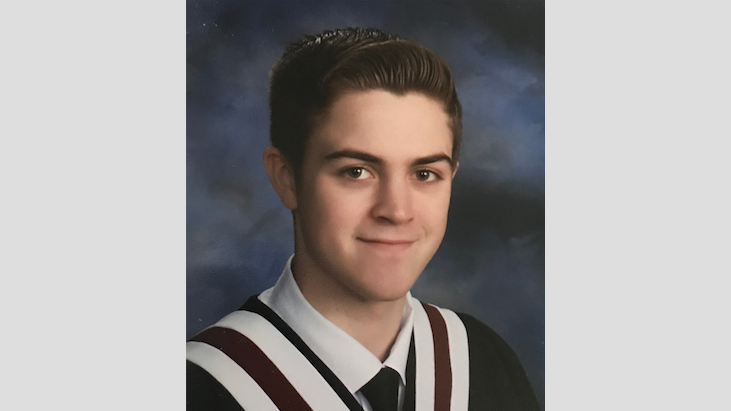 While he won’t be able to address his fellow classmates Thursday evening at Huff Estates Community Centre, PECI Class of 2020 Valedictorian Nolan Steen is thankful for the way school staff came together and tried to make the end of the secondary school career as normal as possible in these unprecedented times.

The COVID-19 pandemic has thrown life into a blender for students across Canada and that especially rings true for those who were putting the finishing touches on their four years at secondary school ahead of their post-secondary plans.

Steen, who was due to speak on behalf of this year’s crop of PECI graduates Thursday night at the Community Centre if the pandemic hadn’t disrupted all aspects of life, said the biggest obstacle he and his fellow classmates have been facing is the uncertainty of it all during the age of COVID-19.

“For me, the biggest challenge has been the uncertainty of everything in terms of the present and the near future. This was very important last part of our secondary school career and we had a lot of memories to make in the last three months. I know a lot of us were devastated about prom and that’s not something we can get back,” Steen told the Gazette.

Along with school, PECI athletics were washed out and Steen was likely to find himself playing a prominent role on the Panthers baseball team hoping to defend their Bay of Quinte championship.

But more important than athletic pursuits are preparations for post-secondary school studies.

While PECI’s Guidance department worked diligently to assist those students making applications to colleges and universities, there was much chaos and confusion surrounding the process, especially when the schools were shuttered and staff were working from home.

Steen was lucky enough to have been accepted to Queen’s University’s Concurrent Education program prior to the province’s announcement of a state-of-emergency but other PECI graduates were not.

“There was a lot of people that I knew hadn’t been accepted to the college or university of their choice and there was a lot of anxiety about what was going to happen next year for them,” he said.

Like other students across Ontario who were forced to wait and see what would happen with regards to the school year, online learning platforms were rolled out for those in the Hastings and Prince Edward District School Board and Steen and a good number of his peers engaged in this new way of learning in order to enhance their marks.

“For me and some of my classmates, we agreed it was shockingly well organized when you consider the amount of time our teachers and the school board staff had in order to bring it all together,” Steen said. “I have never taken an online course before and communication was the biggest factor for our success because our teachers did their best to make sure we understood the process and did everything in their power to make it easy for us to understand the programming.”

Steen said the process of studying online became more easier and streamlined as the days wore on and school staff did an outstanding job ensuring any PECI student without resources such as devices or access to wi-fi were supported.

“It was a really historic moment the way our school came together and finished off the school year the best way we could considering everything that was going on. I applaud our teachers and our principal Mr. Andrew Ross for taking all the time and effort to making the school year at least the academic part of it, somewhat normal,” Steen said.

The cancelation of the typical late June PECI graduation ceremony was announced sometime ago so Steen has some extra time to collect his thoughts and craft an adresss.

He admits to not having put pen to paper as of yet but one aspect he’s considering is how may or may not offer advice to his fellow graduates.

“Everyone has their own story so far and everyone has their own path they want to take in life. To me, I say ‘Find your own advice, let life teach you’. If I were to offer my advice, that’s based on my experiences,” Steen said. “Especially in a time of a global pandemic, life can touch you in so many different ways and to me, you have to find your own way to approach that and learn the lesson life brings to you that particular day.”

Plans to honour PECI’s graduating class of 2020 in person have been tentatively set for some time in late fall of this year should conditions allow.

Even sourcing a venue could be difficult as its assumed that if COVID-19 hasn’t has a second wave, the ice could be in place at the Community Centre.

“My hope is that we can gather together in the fall. For myself, being selected as valedictorian of the graduating class of PECI is huge honour and a big part of that is being able to offer a valedictory address with your classmates and family there. I’m really looking forward to that opportunity,” expressed Steen.