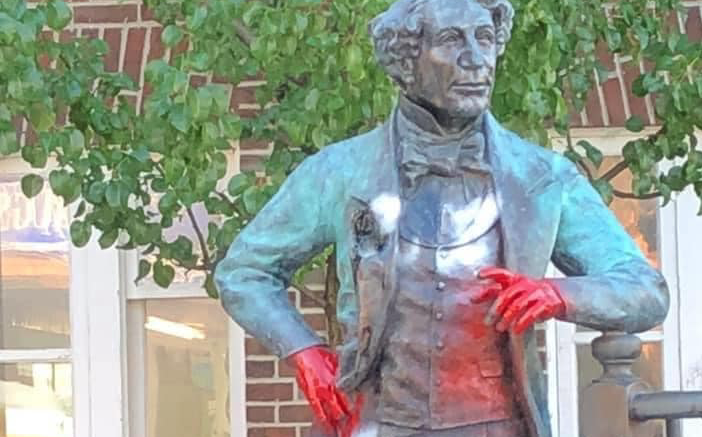 RED HANDED The statue depicting Sir John A Macdonald outside the Picton Library was defaced by unknown person(s) with red paint some time in the early morning hours of June 29. (Submitted Photo)

Public consultation cannot come soon enough for the statue of Sir John A. Macdonald. Though the statue currently resides in front of the Picton Public Library, its fate remains to be seen with the municipality having announced on June 26 that a public discussion would be led by the Prince Edward Heritage Advisory Committee (PEHAC) on the future of the statue.

The statue was commissioned to artist Ruth Abernathy and was presented to the municipality in 2015 by the Macdonald Project of Prince Edward County to celebrate the bicentennial of the birth of Macdonald. The representation of Canada’s first Prime Minister as well as the architect of the Indian Act is entitled ‘Holding Court’ and was unveiled to the public on Canada Day of that year. It is presented as a tribute to the Macdonald’s time in Prince Edward County as a young man working at his uncle’s law office.

After the statue was removed to make way for renovations at the Armoury, it was re-installed in front of the Picton Library in December 2019.

With its prominent place on Main Street, and prior to the pandemic, the library had used the statue to facilitate a speaker series, that included well-known Indigenous thinker and author, Dr. Niigan Sinclair.

Just three days after the PEHAC consultation was announced, County residents woke up Monday morning to find the hands of Canada’s first prime minister soaked in red paint which was removed by municipal workers a short time later. Several other Macdonald statues across the country have recently been soaked in red paint.

With the degree of Macdonald’s reprehensible and brutal acts towards indigenous peoples having reached mainstream consciousness, there is a palpable sense of frustration among many who regard the statue as a legacy of systemic racism.

Many in the community have also called for the statue to be removed.

“Statutes are powerful symbols that can evoke a range of emotions for different people. Determining the future of the statue in our community will not be an easy conversation, especially given the complex legacy of Canada’s first Prime Minister. However, I believe we can have a constructive deliberation that respects all viewpoints,” said PEHAC Chair Ken Dewar.

The County’s Chief Administrative Officer asked PEHAC to develop recommendations and provide advice to Council as it relates to the statue.

It is anticipated that PEHAC will establish a working group to examine the issue. The PEHAC Chair will invite stakeholders with a range of perspectives and viewpoints to participate.

PEHAC will meet next week to review the working group membership and terms of reference. A report from the PEHAC working group is expected to go to Council for consideration on September 1.