EDITOR’S NOTE: Due to Canada Day holiday and the press deadline being advanced, this editorial was written on Tuesday afternoon, a day prior to a second instance of vandalism at the Sir John A. Macdonald statue.

The Prince Edward Heritage Advisory Committee and, by extension, Prince Edward County Council should have known long before Monday morning’s defacing of the statue of Sir John A. Macdonald they have a proverbial tiger by the tail.

Monday’s act of vandalism in protest of Macdonald’s representation in our town should make clear the notion Ruth Abernathy’s “Holding Court” cannot remain as presented on Picton’s Main Street.

The Picton Gazette cannot stand to condone such acts against municipal property and public art installations however, given the frequency that statues of “Founding Fathers”and community leaders-especially those with complex legacies-have been desecrated in the past few weeks, it’s hard to see this type of protest not taking place again. And again.

There will be a few options that will emerge regarding “Holding Court”. Relocation would be one. A new plaque with a more fulsome recount of Macdonald’s entire legacy that would provide teachings to those stopping for a gaze would be another. Perhaps that could be combined with a live component where an indigenous person would be present during times of heavy foot traffic in downtown Picton and their words could explain what Macdonald’s legacy is to first nations culture.

In the unlikely event the PEHAC sub-committee on the Macdonald statue comes to the conclusion “Holding Court” remain as is and where is, we can say with great confidence it won’t be a decision that will be ad infintium. More acts of vandalism are almost certain until a flash point is reached when the children of today become the leaders of tomorrow and clean up this controversy for us.

See, the colonial cat is out of the bag for them.

As I mentioned in a previous editorial, my education about Sir John A. Macdonald at my dear Athol Central School contained verbiage about  Charlottetown and Canadian Confederation and the steel rails that bound a country together and, yes, a factoid or two about his time lawyering in Picton for a few months at the age of 19.

Today’s students are being taught some of the same facts about Canada’s first Prime Minister but their teachings also include aspects like residential schools, the clearing of the plains, the Chinese Head Tax and exactly how those steel rails came to be laid. They are asking tough questions.

What kind of appetite will those in the halls of power have in 20 or 30 years for a whitewashed version of Macdonald on Main Street, particulary when the statue is a regular target for vandals protesting its very existence?

We don’t envy the task entrusted to the Macdonald statue working group. Its genesis came about from Dr. Niigaan Sinclair’s visit to our community and its roots are in truth and reconcilation. It will be the group’s task to gather public input and forge ahead with a decision that will likely be unable to please everyone on either side of the polarizing issue. But if this community is serious about continuing on the path of truth and reconciliation, a decision that respects the complete version of Macdonald’s history must be arrived at.

Our children will demand as much. 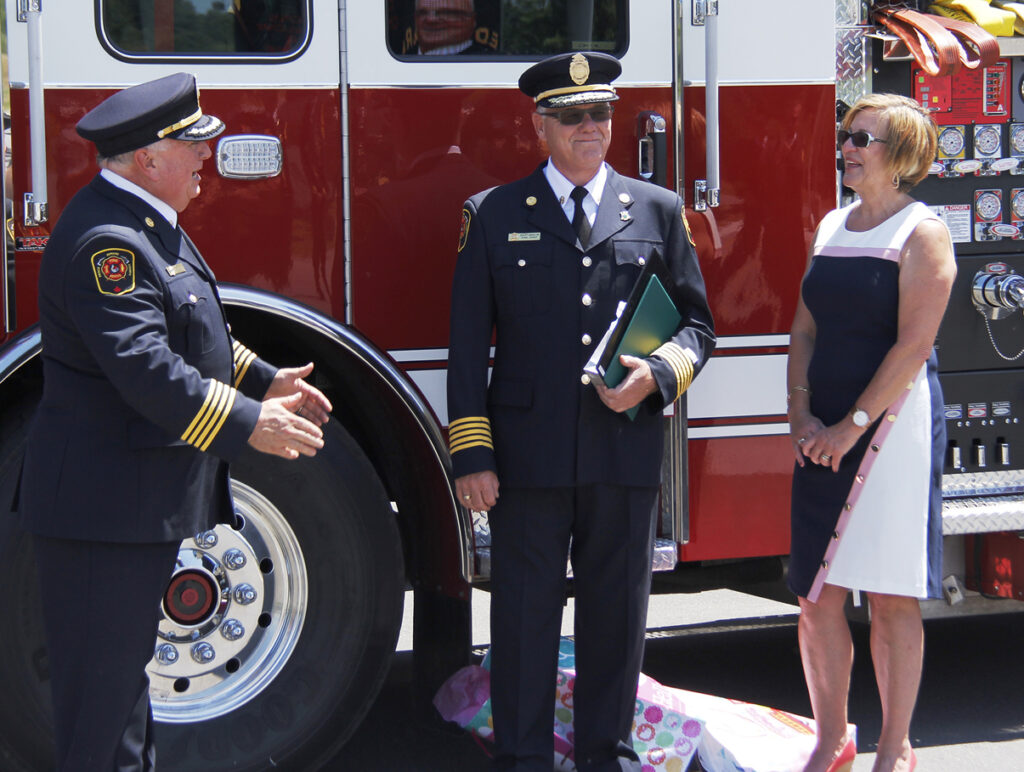 HAIL TO THE CHIEF – (l-R) Flanked by incoming Prince Edward County Fire and Rescue Chief Robert Rutter and wife Debbie Manlow, outgoing Chief Scott Manlow observes a collection of local fire fighters and visiting members of neighbouring fire services at Station One on Friday morning. Manlow was surprised on his final day of duty with a procession that included his family members. (Desirée DeCoste/Gazette staff)