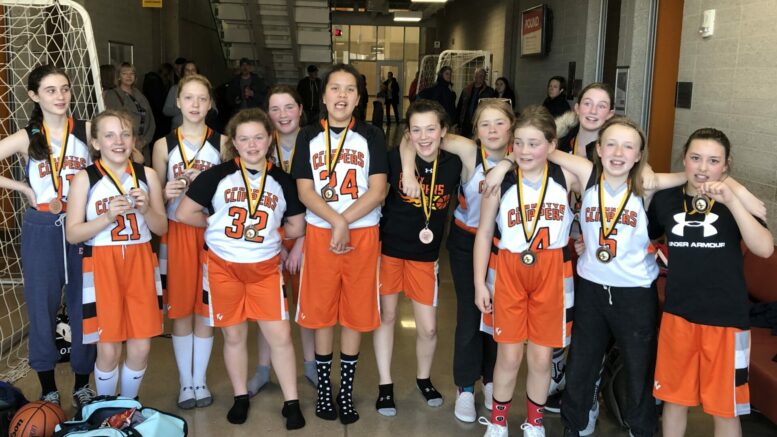 The U12 Girl's County Clippers team earned medals at an OBA-sanctioned tournament this season. (Submitted Photo)

Already it’s 11th season of operation, the County Clippers Minor Basketball Association handed out it’s individual player and Coach/Volunteer of the Year Awards for 2019-20 recently.  The local roundball association had four teams suit up and a fifth team wasn’t able to get started due to the COVID-19 pandemic.

“As a small organization, we’re proud of the variety of teams that we offer that compete all around the province in the Ontario Basketball Association.  We had a U10 co-ed team, U12, U14 and U17 girls teams, and a U16 boys team that was supposed to start in late March,” said club President Rob Garden.  “None of us wanted things to end the way that they did, but it was out of our control and our teams did a good job wrapping things up in a positive way.” 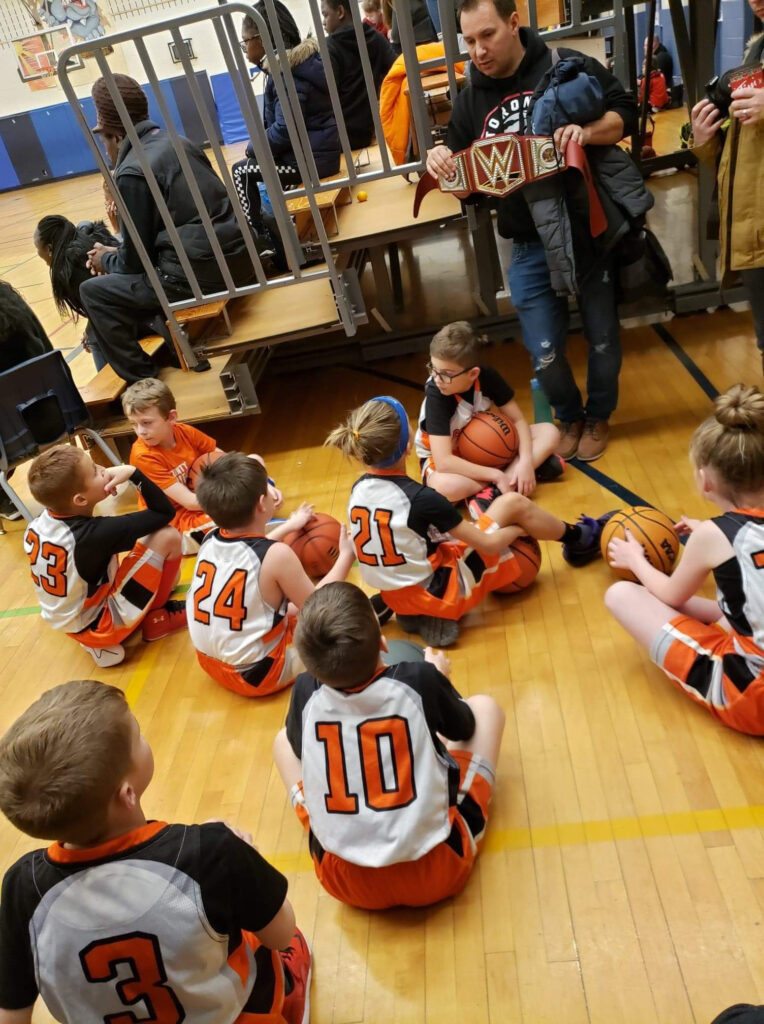 County Clippers U10 Coed coach Jamie McCourt was recognized as the local basketball association’s coach of the year in 2019-20. (Submitted Photo)

The Clippers U10 team, led by coaches Jamie McCourt, Tyler Thrasher and Kurt Barnett had an exciting season.  Coach McCourt notes that “last season was the first time the Clippers offered a team for players in grades 2 through 4, and the learning curve was steep.  However, with a strong core of returning players and a few new additions, this year’s U10 installment had a great season.  Luckily for us, our year end tournament occurred before March Break so we were able to get in our entire season.”

The U10 team finished their season winning a bronze medal at the Ontario Cup.

The U12 Girls team was filled with many new faces. Only four of the players had ever played in the Ontario Basketball Association. Even though there were a lot of new players, it didn’t discourage them from working hard and fostering a love of basketball. Coaches Sara Macneil and Susan Barberstock focused on developing teamwork, understanding rules and fundamental skills this year.

The U12 players were constantly challenged to work outside the box. Friendships and team goals were developed throughout the season. Over the course of the season the players all improved, both offensively and defensively. The U12 Girls team was able to participate in three tournaments but had their provincial championship cancelled due to Covid. This was a good building year for the team and they will be in a great position to compete next year.

The U14 Girls team was led by veteran coaches Steve O’Brien and Laurie Spencer.

“We were excited to have two new players bring their talents, and join an enthusiastic and welcoming core group of players who have been together for a few years now. While it was disappointing that we were unable to finish the season, there were a lot of successes,” said Coach O’Brien.

A silver medal in the Belleville tournament showed how much the girls have progressed as a team and set the tone for the team’s games in the Ontario Basketball League.

“We had early success winning our first two games, and opposing coaches made a point of recognizing our improvement. There was an exciting comeback win in Toronto and a number of games where the girls competed right to the final whistle. The end result was a very respectable .500 record; also a significant improvement from last season,” noted O’Brien.

New this season, the Clippers ran a U17 Girls team.

“We are always trying to look at the big picture, and we have been noticing more and more girls are quitting sports as they get older.  By offering a U17 team, we were able to attract more interest from girls in grades 9 – 11 and encourage them to keep playing and stay active,” said Garden.  New to the Clippers program this year were veteran coaches Rob White and Brian Profit.  “We were very fortunate to have Rob, his wife Jen and Brian join the Clippers program this season.  They bring a wealth of knowledge and experience and their focus on development and fun fit in nicely with our goals as an association.”

Due to COVID, the girls unfortunately were only able to complete half a season, but coach White was very pleased with this progress of his team.

“At a tournament the weekend before the COVID shutdown occurred, we won our last two games and finished with a bronze medal.  The girls were really starting to play as one unit, defence had always been fairly strong and we were turning into a team that could read and react to the defence and starting to score much more efficiently,” said White.

Unfortunately for the U16 Boys, their season never even got started.

Coaches Barb Inrig-Pieterse, Christin Dickenson and Shane Wilkinson held tryouts, made a roster and were excited for the season.  With any luck, the same group can return next year and make history as the club’s first ever U17 team.

Emily Cowan was awarded the Steve O’Brien Volunteer of the Year Award.  She was both a member of the U14 coaching staff and she played a key role on the executive.  “As team co-manager, she was always willing to help and ensure that parents were informed and organized.  As a member of the executive, she took on a large role as Treasurer.  This was her first year in the position and her learning curve was steep, but she was always eager to find answers and help wherever she could,” said Garden.

Jamie McCourt was named the Rob Garden Coach of the Year for his exceptional work with the U10 co-ed team.

“Jamie received 15 nominations, the most any award winner has ever received,” commented Garden.  One of the parents who nominated the former Loyalist Lancers coach said “…he always came to practice and games with a great attitude which filtered down to the kids. He was very supportive and acknowledged each child’s strengths and worked with them to improve where they may be struggling. He was great at building their confidence individually and as a team. The growth in every child on the team was amazing to watch throughout the season. He leads by example. He is positive and kind, while providing constructive feedback to where improvements can be made. Thank you for your wonderful coaching strategies and teaching our children the values and ethics they will continue to build on throughout their athletic careers and life itself.”

“Overall, this was a great year for the Clippers.  We have no idea what things will look like next year, however we remain committed to offering a high quality, cost affordable program as soon as it’s safe to do so. Until then, grab a ball, get up some shots and stay safe Clippers,” Garden enthused.