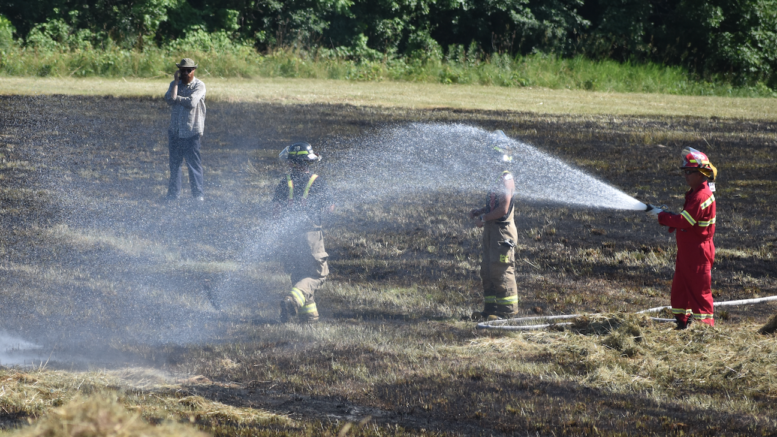 Four trucks and nearly 20 firefighters  were called to a reported grass fire in a remote location on County Rd 7 on Monday afternoon.

Upon arrival, fire crews from Station One quickly determined that a hay baler was the point of origin and worked quickly to douse the piece of farm machinery and a multi-acre grass fire to keep the blaze from spreading.

Trucks and firefighters negotiated farm laneways for almost a kilometre before being able to access the hay field.

“The call came in as a grass fire but once we got there, we could see the baler was on fire. Things are so dry right now, part of the field took off as well. We got the baler out and beat it back before it approached a fence line but it did burn off several acres,” Prince Edward County Fire and Rescue Chief Robert Rutter told the Gazette Tuesday.

Rutter said with the many moving parts and the tinder nature of the hay, especially in light of the lack of precipitation in Prince Edward County lately, it doesn’t take much for ignition. The Chief added there was a similar fire in the Trenton area Monday as well.

While damages were undetermined, the tractor and baler were able to be cleared from the field and quick action by PECFR minimized damages and property loss.

Rutter advises farmers to carry fire extinguishers and cell phones while baling, however urged them to err on the side of caution.

“You can be looking forward for half a minute and look back to the baler and see a lot of flames all of a sudden.  We don’t want farmers getting too close, trying to put something out that’s too far gone for an extinguisher,” he added.