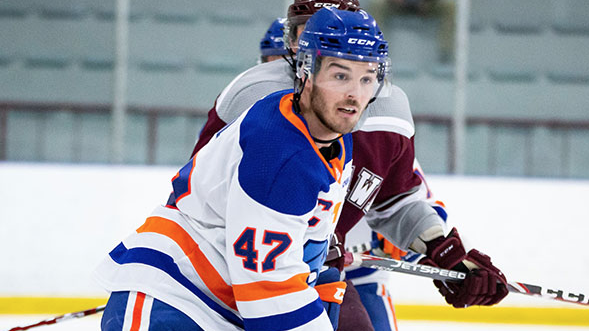 Wellington's Alex Yuill will be suiting up for the Guildford Flames of the United Kingdom's Elite Ice Hockey League this season. (UOIT photo)

Wellington’s Alex Yuill has inked a one year deal with the Guildford Flames, an entry in the Elite Ice Hockey League which is recognized as the United Kingdom’s top loop. After graduating from the Quinte Red Devils program at the end of 2012, Yuill played four seasons in the Ontario Hockey League with Barrie and Belleville before attending the University of Ontario Institute of Technology in Oshawa while playing Usports hockey.

In 140 Canadian University contests, Yuill scored a dozen goals and had 69 points over his five seasons with the Ridgebacks of UOIT.

It was a connection with the UOIT staff and the Flames organization that wound up leading to the IEHL club scouting Yuill and offering him a deal.

“The report we got about Alex was glowing in terms of his ability to deal with the puck in his own end, which is a crucial part of the game,” Dixon told Guildfordflames.com. “In the past few seasons, we have been very mobile and good at puck management to help us leave our own zone so continuing to fill holes with players who have those skills is a key part of building a team that does not spend an inordinate amount of time defending constant pressure.”

“We think Alex will be a great fit with the kind of team we want to put on the ice, and it is great news to get his commitment to us for the new season.”

Yuill finished his amateur career serving as captain of the UOIT squad and set the organization’s high water mark in games played and was third all time in assists at 57 helpers but hockey was very much up in the air at the end of the USports season for the 25-year-old.

“I finished the season and wasn’t sure what I was going to do, whether I was even going to keep playing but a former assistant coach I had is from Guildford and he put me in contact with Coach Dixon and we spoke and explained the city and the league,” Yuill told the the Gazette. “They offered me a contract and the contract was pretty good so decided to take it.

Playing professionally is a dream Yuill has always harboured and he’s excited for this opportunity.

This was something I wanted to do for a long time so I’m going to take advantage, enjoy the experience and adventure,” he added.

In joining the Ridgebacks in his freshman season, Alex was able to suit up with older brother Cam. Cam Yuill, a standout with the Wellington Dukes and an important part of that club’s 2011 Dudley Hewitt championship club reached out fellow alums in Leonard and Murphy to talk about hockey and life in the UK

“Cam spoke with Murph and Curtis and talked to them on my behalf and they were very complementary to the EIHL. They loved playing there, the said it’s a great league and Murph said ‘You have to go for it!’,” Yuill said with a laugh.

Yuill acknowledged the support a number of County hockey fans sent his while while he was in the Major Junior ranks as well as USports.

He added this next step in his career was possible thanks to Ridgebacks coach Curtis Hodgins who has spent time in the Ontario Junior Hockey League coaching the Whitby Fury and Cobourg Cougars.

“Coming out of the OHL I was kind of unsure where I was going to fit in but Coach Hodgins and the UOIT program were huge for my development,” Yuill said. “He trusted me and how I played, gave me ice time and helped me develop further. That school and program was a major reason to me signing a professional contact.”

The EIHL has set a very tentative date of commencing the upcoming season on November 25 and in the mean time Yuill will continue to prepare, stay in as best off season shape as he can before he can hit the ice in late summer.

“I’m really looking forward to this next chapter in my life…whenever it gets started,” Yuill added with a laugh.