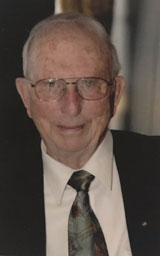 August 25, 1924 – June 28, 2020
With great sadness, we announce the passing of Paul Burd after a brief stay in hospital resulting from a fall. Born in Marlbank, Ontario to William and Jeanne Burd (nee Crozier) in 1924, he is predeceased by sister Lillian Knaggs and brother William Burd. Dad is survived by Jean Burd (nee Forsyth) his loving wife of 73 years, children Peggy Howorth (Peter Leiss), David Burd (Ruthie Burd) and Brenda Burd, cherished grandchildren Terry Howorth, Brendan Burd, Dylan Burd and Adrienne Ashby along with various nieces and nephews. After graduating from Queen’s University and getting his teaching certificate, Paul married in 1947 and taught at various schools in London, Ontario prior to becoming a vice principal and then moving to Picton to serve as principal of Prince Edward Collegiate Institute from 1970-1981. In 2006, Paul and Jean moved to beautiful Sidney, B.C. to enjoy their remaining years and this allowed Paul to indulge his love of golf on an almost year round basis. Paul’s strong character, generous nature and sense of community were an inspiration to us all. After retiring he became an active member of the Picton Rotary Club and served on various committees in United Church of Canada congregations wherever he lived, most recently St. Paul’s United Church in Sidney. Due to the pandemic, a limited memorial service will be held at St. Paul’s within the next few weeks. Donations in Paul’s memory may be made to the Rotary Foundation.