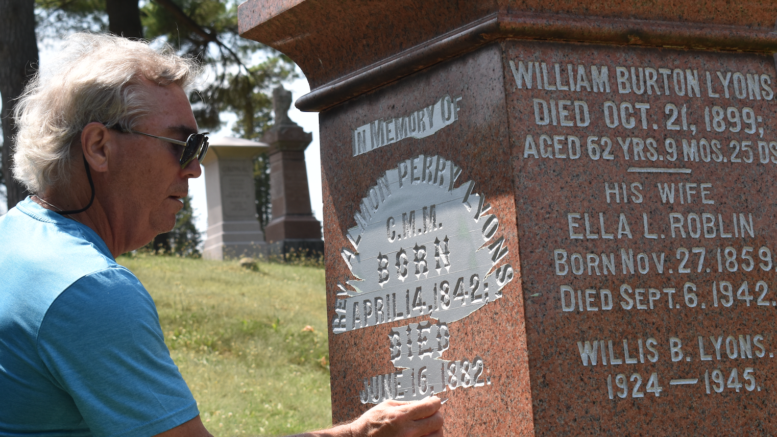 The COVID-19 pandemic has allowed many people an opportunity to scratch off many items off the rainy day list.

You know, that laundry list of tasks you might tackle if there ever came a day when your social and or employment calendar cleared.

A Picton man might have one of the more rarer COVID-19 activities completed during this time of the novel coronavirus. John Lyons has spent a great many hours adorning a Lyons family head stone at Glenwood Cemetery.

Lyons said the project of spraying silver paint inlay on the names of departed Lyons family members has been on his to-do list for a couple of years and takes note that the Scottish red granite obelisk style grave marker was very close to becoming toppled during the vandalism spree in 2018.

“If it was broken, we would never be able to replace it with an original. The quarry where it was mined in Scotland is now abandoned,” Lyons told the Gazette.

On the day the Gazette paid a visit to Picton’s ‘City of the Dead’, Lyons was wrapping up his project and peeling off tape and wax paper on the east side facing of the marker and the words that told of the birth and death of Lyon’s Great-Great Uncle, Methodist minister Almon Perry Lyons.

Lyons explained that silver inlay would have been an extra added to the headstones during the time when the members of the family died and he’s uncertain if this marker had the adornment or the ravages of time wore it away. 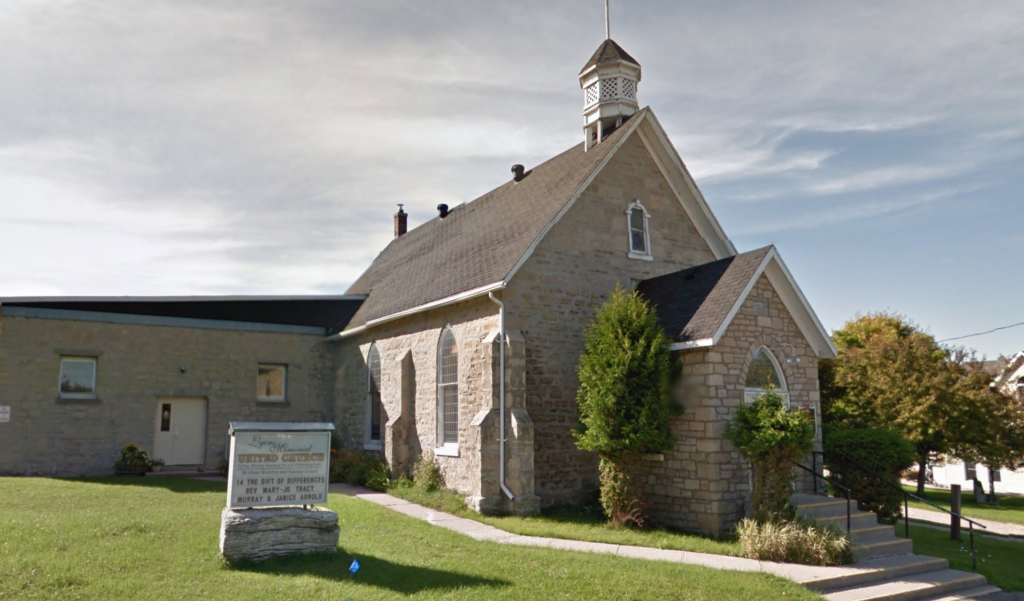 “You impress the tape over the letters and then cut the tape out at the proper angles, revealing the small areas to be painted,” Lyons explained. “The blades really don’t like the granite, so you go through a lot of them.”

The late reverend was the first member of this part of the Lyons clan to be buried at Glenwood. According to the family historian, on the day Almon died, the Lyons family patriarch hitched the buggy, went to town and purchased a 12-person plot.

Rev. Lyons was buried the next day and, ironically, it was a pandemic that got the relatively young minister who had just started leading people to God.

“He entered the seminary later than most people did in those days and he was appointed as a circuit rider in Gore Bay on Manitoulin Island,” Lyons said. “He came down with tuberculosis and he and his wife Eliza Rebecca Lyons returned to Prince Edward County where she nursed him until he died.”

When Almon took sick, he was raising funds for a Methodist church in Gore Bay and his widow continued the fundraising until there was enough to raise a sanctuary.

Noting the devotion Eliza Rebecca had for the departed, when she remarried, it was to another methodist minister and the first of three sons was named Howard Perry Lyons Seymour in honour of her first husband.

“What really ties all this together is all three sons went into the ministry, became ordained and, ironically, two of them were stationed at churches here in the County at Cressy and Northport,” Lyons remarked.

Lyons noted the font type on Almon’s side of the marker is different than the others because of the time period. The pillar was installed some time after the reverend’s burial and his name was the first engraved on the stone.

The finished product certainly helps anyone passing by the plot read the nameplates more easily.

“I imagine there are a lot of different and unique projects going on in Prince Edward County right now because people have a little bit more time to tackle them,” Lyons added.