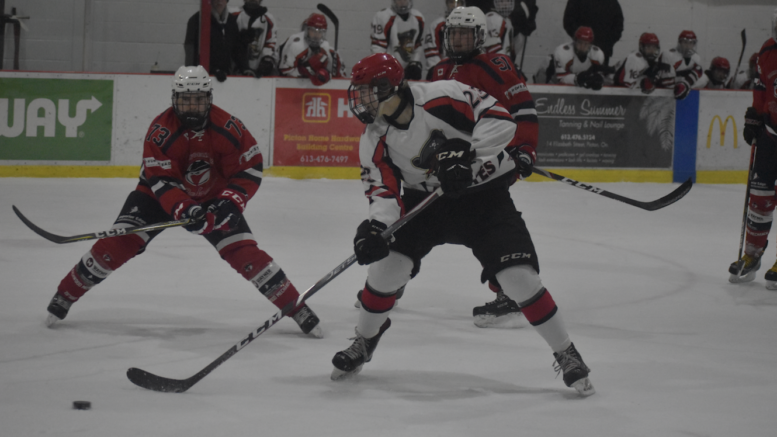 The Picton Pirates are bulking up on leadership and experience for the 2020-21 Provincial Junior Hockey League season.

Picton announced a number of signings in recent days that include local prospects and highly valued returnees that should make the Pirates a tough test to the Tod Division field if and when the puck drops on Ontario Hockey Association action later this year.

In terms of new recruits on the Pirate ship for the up coming season, the club announced the Harrison name plate will live on in the dressing room as Ian Harrison, younger brother to graduating captain and Picton native Will Harrison, is coming aboard.

Harrison, who will turn 18 in September, had seven goals and added three helpers in 34 Eastern Triple A games for the Quinte Major Midget Red Devils last season.

He also has a handful of games of PJHL action as an affiliate player for Picton over the last two seasons.

“He’s got a gritty style and his work ethic is just like his brother’s so I’m sure he will be coming to camp in the best shape of his life,” Pirates Head Coach Ty Green told the Gazette Monday. “We had Ian for a few games last year and we are really looking forward to what he will bring to the lineup.” 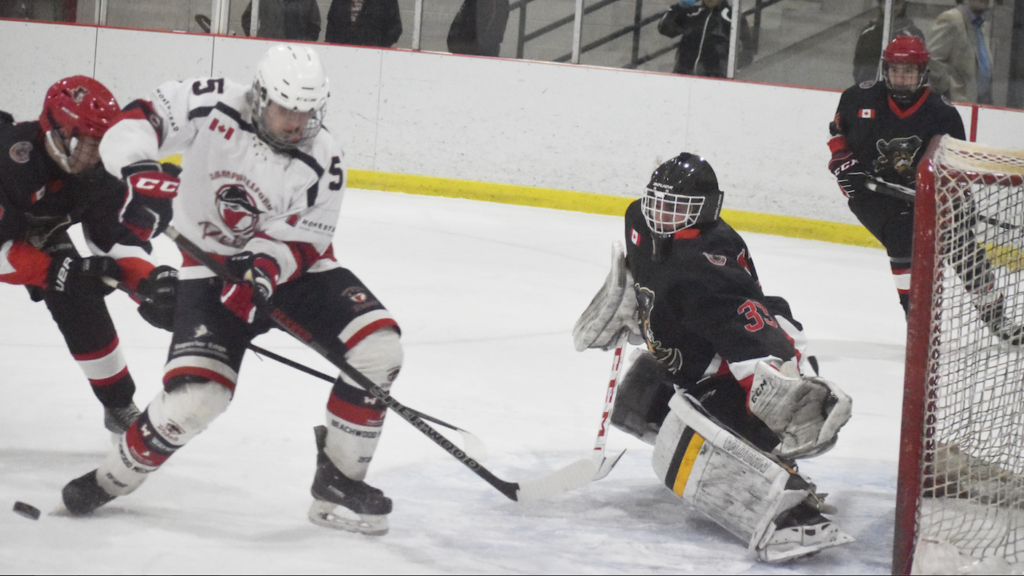 “He’s a great skating defenceman who can read plays and knows when to make that jump and get involved in the play,” Green said. “I was real impressed with the camp he had with us last season, I didn’t know what to expect and he caught my attention right away.”

In the crease, Kyle Renaud could try to catch on with a Jr. A club but the Pirates are happy to see their other portion of the 2019-20 tandem  Eric Tessier commit for the upcoming season.

The Kingston native balanced a busy first year at Queen’s University with providing solid netminding with Picton, turning in a 14-9-1 record with a 2.84 Goals Against Average and a .914 Save Percentage.

‘Tess’ was a great puck stopper for the club and held more than his own in the early part of the season when Picton was still finding their sea legs.

In the last part of the campaign, Tessier was outstanding.

“We know what we are getting out of Tess and we are excited he’s coming back and he’s just as excited to be coming back,” Green said. “He committed to coming in and commanding the number one spot through his play and he’s really pumped about the team that will be playing in front of him.”

Picton’s defensive corps will hardly miss a beat this season as veteran overagers Nick Kyte and County native Kurtis Wood will be coming back for their final seasons of junior hockey and will be joined by returnees Cooper Rogers and Aiden MacDonell.

Kyte is the reigning Tod Division Best Defenceman winner and Wood is as hard nosed and skillful a defender on any roster in the PJHL and the pair will gobble up plenty of high-leverage minutes this upcoming season.

“We were really happy with the way Mac developed. When he came over as part of the Devin Morrison deal, we weren’t sure what we were getting but there was improvement all season long and he was steady,” Green said. “With Coop, we know we have a really mobile, great skating defenceman that can join the rush at any time. Our back end is really shaping up well.”

Up front, the Bucs got a bit of a surprise when Landon McLellan committed to the upcoming season.

The Shannonville native lead the team in goals with 26 in his rookie season in 2018-19 and earned a promotion to the Wellington Dukes the following season but returned to Picton partway through the campaign.

“We know Landon is looking ahead scholastically and he’s a very bright young man with a great future ahead of him and the workload that comes with the PJHL is going to allow him to focus on his studies,” Green said. “He’s going to have a leadership role with this team this season and he’s comfortable with that.”

Another surprise return to Picton is forward Nate Boomhower. The 6’2” 195 lbs was having himself a great playoff in 2020 with a goal and three assists through two-and-a-half-games when disaster struck and he fell awkwardly into the boards, injuring his surgically repaired shoulder.

“The rehab has gone really well and the shoulder is feeling great. He didn’t require surgery and he should be fit to play when we have training camp,” Green said. “I know he’s excited to come back and we are happy to have him. If you would have told me that he would be playing this season after watching him get taken off the ice in a stretcher in Game Three of the Amherstview series, I wouldn’t have believed you.”

Picton’s third overager has been Mr. Everything for the club and will fill the captaincy role for the upcoming season and that appointment is well deserved. 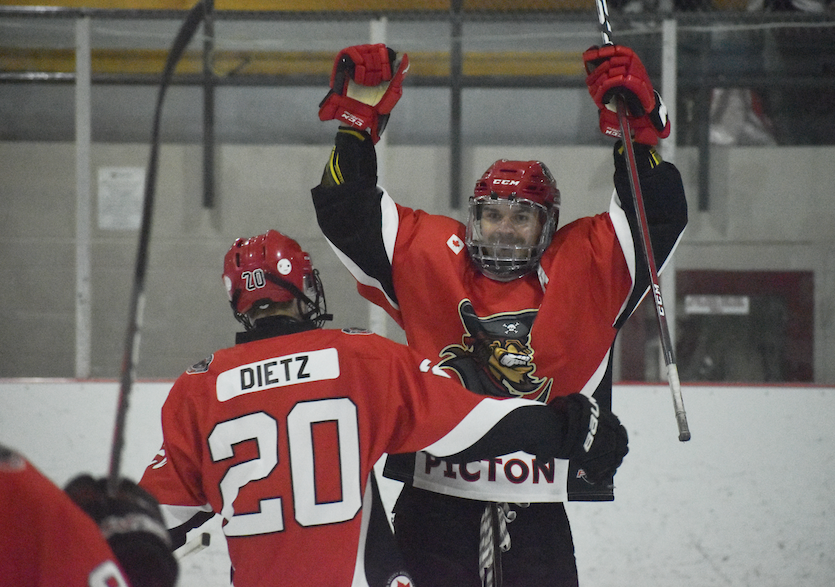 Deseronto’s Griffen Conger has embraced being a key cog in the Picton Pirates machinery since coming over from the Napanee Raiders before the 2018-19 season.

Points haven’t been a problem for Conger as he’s been a steady producer, scoring 44 goals and adding 65 helpers for 109 points over the last two seasons.

But it’s Conger’s maturity and his willingness to embrace the centreman’s role that has impressed Green the most.

“He really understands the league, his team and he knows what he has to do in order for the team to be successful,” Green said. “I’ve coached him for a long time and when he’s challenged, he’s at his best and now he has the challenge of leading this team and being their captain and we are expecting big things from him.”

Three other returnees up front have also committed to Picton this season in the forms of Nate Brant, Brayden Adams and Dawson Lindsay.

In Lindsay, Picton can be forgiven if they feel like they struck gold in an abandoned mine. After being a bit-player with the Islanders, Lindsay came over from his hometown Gananoque club in mid-November and looked right at home in a Pirates uniform.

In 29 games with Picton, the speedy forward scored seven times and added 20 helpers and Green is excited for what this season holds for Lindsay.

“He sees the ice well and he puts himself in the right spots all the time,” Green said. “You look at what he did when he came over and he was probably guilty of not being able to finish on a lot go chances so if he can improve his touch around the net, he’s going to score a lot of goals for this team. Plus he’s highly coachable. He’s the kind of player who’s always looking to make the improvements and adapt.”

Frankford native Brayden Adams showed flashes of brilliance this season and will be looking to build on his consistency in 2019-20. The forward had nine tallies with four helpers last season in a solid rookie campaign.

“He’s got the speed and shows those flashes and I’m really impressed with skating. He’s also a great utility guy, when we are down a defenceman, he can play that role,” Green said of Adams.

In Brant, Picton has a big-bodied player that can possibly fill some of the grit-and-sandpaper role left by the graduating Tristan Cowan.

“He will do anything you ask of him and the other team certainly is paying attention when he’s on the ice,” Green added.

While there’s been plenty of solid additions and returnees to the Picton lineup, one very notable if not completely expected defection is the promotion of sniper Khaden Henry.

Henry, who led the Tod Division in goals with 37 as a 17-year-old rookie last season, has signed up with the Trenton Golden Hawks of the Ontario Junior Hockey League.

Green said it was completely expected that Henry would be moving on after a starry season with Picton.

“We knew he would command attention from Jr. A teams. You don’t do what he did in his rookie year at 17 and not wind up going to the next level. He was a phenomenal player for us, really coachable and willing to adjust,” Green said. “You put him around the net with the puck, he will always find ways to finish. We weren’t sure early on what we were getting when he came over from Gananoque but it was  amazing to have him in our lineup every night and we wish Khaden nothing but success in Trenton.”