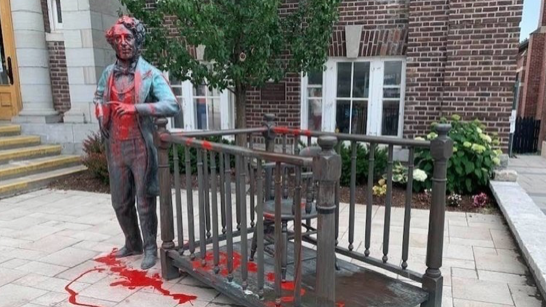 The lead organizer of the Macdonald Project announced the creation of a new online petition calling for the County of Prince Edward to leave “Holding Court”, the Ruth Abernathy-created statue depicting a young Sir John A. Macdonald speaking in a court room in Picton in 1834, where it is.

David Warrick, spokesperson for the Friends of Macdonald PEC and Quinte Region, said  “Holding Court” which is located in front of the Picton branch of the Prince Edward County Library should be left there.

Warrick said petition was created in response to the vandalism of Ruth Abernethy’s bronze portrait of the young Macdonald.

“Holding Court” was installed and unveiled on Canada Day, 2015 and recognizes the brief time Macdonald was in Prince Edward County taking care of his ill uncle’s law practice.

Currently, a subcommittee of the Prince Edward Heritage Advisory Committee is being formed to advise Prince Edward County Council as to the future of the statue that has been the target of protestors calling out Macdonald’s comments and actions towards indigenous peoples of the western plains, among other historical transgressions as Canada’s leader.

As of Monday, over 560 people had signed the petition and Warrick said names are joining by the hour.

The petition can be found here:

“It’s clear that the Canadians welcome debate when there is a fair forum.  But vandalism is not the way we bring about change in Canada,” Warrick said in an email to the Picton Gazette. “Cancel culture has arrived in Picton and many are disturbed by it. There has been a lot of misleading and inaccurate information circulated about John A. Macdonald with no fair forum to correct it.

Warrick said many of the recent claims made about Canada’s first Prime Minister are either false or misleading.

A number of prominent citizens have made their feelings known about supporting the petition.

Dr. Patrice Dutil, a professor of politics and public administration at Ryerson University. He is the founder of the Literary Review of Canada and former president of the Champlain Society, one of Canada’s pre-eminent historical research organizations, one that is uncompromisingly scholarly.  He is the author and editor of several books on diverse aspects of Canadian politics and governance.

“This petition is to support and protect a valuable monument and a work of art. It is also to protest the cavalier dismissal of one of the most important figures in Canadian history. Macdonald won six elections as Prime Minister, most with an outright majority. He was popular in his day because he represented the best aspirations of the people of Canada who admired his tireless efforts to bring Canadians together: English and French, Protestant and Catholic, Nova Scotians and British Columbians,” said Dutil. “He did display some of the prejudice of his day, but even then was always on the progressive side of the spectrum. This monument stands for reason. It would be a terrible reflection on Picton if it were removed on the basis of grave misunderstandings of Canadian history.”

Toronto-based lawyer Greg Piasetzki added that Macdonald is rightly revered for his contributions to Canada as a Father of Confederation however, the story “of his extraordinary efforts on behalf of Canada’s Native peoples is less well known and is also an inspiring one as Canada’s founding peoples move forward on the path to reconciliation.”

“Among his many contributions, his massive famine relief program for Native Canadians when the buffalo population collapsed and his multi-year government effort to vaccinate all natives against the small pox saved many thousands of native lands. In addition, his role in native education has been widely misrepresented. Macdonald’s government built, at the request of native leaders, more than 200 day schools and 60 residential schools during his 19 years as Prime Ministers. At all times during Sir John A’s life, and for 30 years after his death, attendance at school by native students, whether at a day school or a residential school, was voluntary. No native child had to attend school. Sir John A believed that, without parental support, such education would fail,” said Piasetzki.

In 1894, amendments to the Indian Act made attendance of indigenous children between seven and 16 years of age compulsory.

“Reconciliation with Canada’s Native peoples can and should be the goal of every Canadian.  But the allegations made against Macdonald need to be challenged as if in a court of law with rules of evidence, not through vandalism, loud protests and hastily written polemics,” added Warrick.  “That is not the Canadian way.”