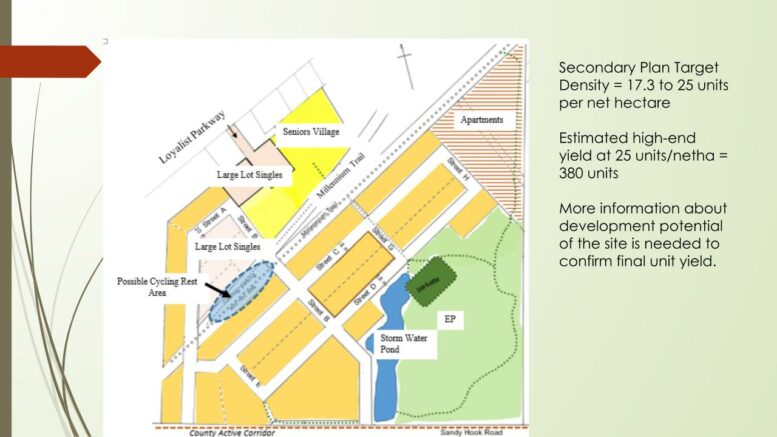 PROPOSED PLAN: One of the many slides shown to the public is of the proposed residential areas in Loyalist Heights along with roads to be built. (Submitted photo)

Close to 50 members of the public joined in a Zoom meeting on July 17th to discuss the newest proposed development in town, Loyalist Heights. The meeting was sponsored by the owner of the property, Narisu Huhe, and was hosted by Ray Essiambre, Principal Planner, of Ray Essiambre and Associates Ltd., along with Project Engineer Matthew McIntosh of Greer Galloway.

Essiambre was careful to note at the beginning of the presentation that the meeting was simply for the purpose of collecting concerns from the public and that the development was still very much in the preliminary phase with applications yet to be filed with the municipality.

The old adage, “if you build it, they will come” could easily be applied to this proposed development of 300-400 housing units. The development would span two tracts of land divided by the Millennium Trail and sandwiched between Loyalist Parkway and Sandy Hook Road.

For years, the 61.5 acres of land now slated for development had been zoned agricultural. In 2015, the municipality re-zoned the area to be used for residential purposes.

The property in question was purchased last year.

“(He) purchased with the intent of getting planning approvals, developing the property and building the units. He will not build all the units, as he expects to bring in partners…it will be a cooperative process over many years,” explained Essiambre.

The bulk of the development would be single dwelling units with some apartments as well.

Matthew McIntosh, Project Engineer, preemptively addressed severely concerns he noted had already been brought up by the public.

Firstly, he stated that the intent would be for the drinking water connection to be connected to the existing water main on Loyalist Parkway. Secondly, he noted that the sanitary connection would be via force main running along the Millennium Trail, all the way up to Lake Street where the municipality believes “there is suitable capacity to connect”.

“This is particularly relevant because a number of questions have been raised about what obligation there would be to connect to municipal services. It does not include any new servicing or work on the Millennium Parkway,” McIntosh explained. “The connection to the Loyalist Parkway would be a simple and direct connection to the existing main. We would not be expanding that service in any way. The force main running up the Millennium Trail would not be along anyone’s frontage so I don’t believe there would be any expectation for connection there.”

One caveat, McIntosh added, was that the developers were not entirely aware of municipal plans for future servicing of Sandy Hook Road.

“We, as a development team, don’t have any specific ideas of what the County’s plans are for servicing along Sandy Hook Road. To my knowledge, there are no plans currently underway to service that and certainly there is not a need to as part of this development,” McIntosh confirmed.

There are, as Essiambre pointed out, various studies that need to be completed for the development to move ahead. The only one completed thus far is an archaeological study.

Studies initiated, though not completed, include: a functional engineering study (sanitary, water distribution and storm water management), a transportation study and an environmental assessment.

“We expect studies will be completed relatively soon which will give us more insight as to how to develop this sight,” said Essiambre.

Just a five minute walk from town down the Millennium Trail, the land in question is a bucolic scene of fields, forests and creeks-for now. But apart from pastoral aesthetics, the area is also home to an important ecological component, the Waring’s Creek Watershed.

As many may or may not know, watersheds play a vital role in the ecosystem. A healthy watershed is imperative for nutrient cycling, carbon storage, biodiversity and water filtration among many other important tasks.

They’re also a wildlife highway, with coyote and deer among others using them for food and as a transportation corridor.

In these ways, watersheds are a perfect example of how one facet of an ecosystem is tied to the greater health of the surrounding environment.

Doug Bowser, a retired teacher who was one of many who attended the virtual meeting, inquired about the nature of the Environmental Assessment and whether or not there might be a conflict of interest.

“I’m curious…the engineering company who is obviously developing the property with the intent of going through with it-they’re also doing the environmental study. Is this not a conflict of interest,” Bowser questioned.

Essiambre replied that the assessment will be reviewed by the municipality and the local conservation authority, among others.

“The environmental study is going to be subject to review by Quinte Conservation and the municipality, among others,” said Essiambre. “It’s a a very rigorous process available to the public.”

Councillor John Hirsch, who was also in attendance, noted that there are policies within the municipality’s Secondary Plan to ensure protection of the Waring’s Creek Watershed.

“You have noted in your presentation that the Picton Secondary Plan deals with this area. Not everybody may know there is a special section in that Secondary Plan specifically for the Waring’s Creek Watershed,” said Hirsch.

After referring interested parties to section 2.12.3 of the plan, Hirsch noted the inclusion of such came about in 2008 when the municipality reached a settlement with the Waring’s Creek Improvement Association.

The vast majority of this property, Hirsch added, is actually in the Waring’s Creek Water Shed.

Essiambre acknowledged the policies in question and added that they have to be addressed.

“I am aware of those policies and they’re part of the environmental engineering studies that are being done. Specifically, I don’t know how they’ll be addressed. That’s part of the investigation,” said Essiambre.

Another issue of note that has been plaguing Prince Edward County is affordable housing, something Doug Bowser brought up with the development team.

Bowser pointed to the recent closure of two elementary schools in the area as being symptomatic of the exodus of young families who can no longer afford to live in the County.

“We’ve lost two public schools in the last few years. Pinecrest and Queen Elizabeth were both made for 800 students and each were under 300,” stated Bowser. “So, the problem is local families with kids can’t afford to buy housing and I think with all this development, it looks like the price ranges-even the low ends-are way above what local families can afford.”

Bowser argued the type of housing for families needed to be both less expensive and consist of detached or semi-detached units, as opposed to apartments or condominiums.

“You need to have housing in the $250,000-$300,000 range. When the base price starts at $350,000 or $400,000 you’re only inviting people from big cities that sell their homes and move out here with no kids,” Bowser asserted. “It’s going to become a total retirement community because local families with kids just can’t stay here. That’s something the owner, I think, needs to take into consideration.”

Essiambre noted that the range of housing types is intended to satisfy various income levels and that they do intend to speak with the municipality about affordable or attainable housing.

“We’re aware of this and that’s part of why we’re offering a range of housing types. We do plan on talking to the County about affordable housing and attainable housing and working that into the plan the best we can,” said Essiambre. “We realize that there’s that low end that always needs help-we’re aware of that and trying to address that.”