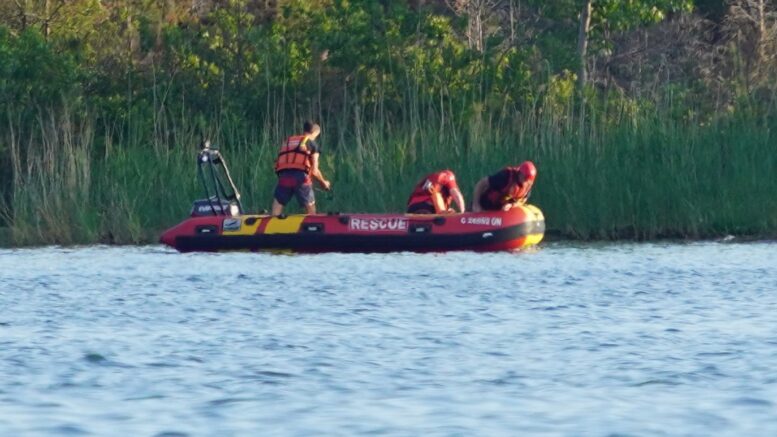 At approximately 1 p.m., a family had been swimming and one member failed to surface. An individual was pulled from the water and CPR was started by first responders on scene before being taken to Trenton Memorial Hospital.

Then, just before 6 p.m. officers responded again with Prince Edward County Fire and Rescue and Hastings Quinte EMS to the same location.

A group of friends had been swimming and one party failed to surface. An individual was pulled from the water and CPR was started by bystanders before being transported to Trenton Memorial Hospital.

Between the drownings, Prince Edward County Fire and Rescue were called to West Point near the site of the former Lakeshore Lodge for a water rescue as two persons in an inflatable dinghy had started to drift away from the shore line and were momentarily unable to return.  That rescue call was stood down while the Fire and Rescue responders raced to the scene as the parties were able to safely make their way back to shore.

According to Environment Canada, sustained winds out the west yesterday afternoon reached a high of 37 kmh with gusts as high as 50 kmh which made conditions perfect for deadly rip currents and undertows.

Sandbanks Provincial Park announced Sunday evening that North Beach would be closed on Monday due to maintenance which is a rare mid-summer announcement for a high volume beach in Prince Edward County governed by the province.  Reports to the Gazette indicated a number of staff members were shook up after the back-to-back tragic scenes played out Sunday.

The Office for the Chief Coroner of Ontario is leading both investigations, with assistance from the Prince Edward OPP. Post mortem examinations have been scheduled for both persons. Foul play is not suspected.

The OPP would like to remind everyone to be aware of current conditions before entering any body of water especially being aware of their location and any hazards present.

“Eastern Ontario has seen a tragic number of drowning incidents in 2020. In many cases, proper use of a life jacket would have almost certainly resulted in a different outcome,” said Community Safety/ Media Relations Constable Aaron Miller. “If you are heading out on the water, wear your personal floatation device (PFD) or life jacket.   It cannot save you if you don’t wear it.”