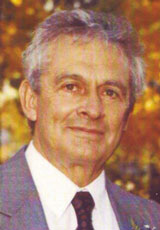 It is with great sadness that we announce the passing of Royston (Roy) Ernest John Baigent. He went quietly and peacefully in his 93rd year, on Monday, July 27th, 2020 in Belleville, Ontario. Son of the late Alice and Ernest Baigent of Wimbledon, England. Beloved husband of Anna Yuill. Roy was predeceased by the mother of his children Molly Baigent with whom he shared Jane, Nigel (Janet), Ian, Mark (Tammy) and Paul (Brenda); Anna’s children Kevin (Shelley), Warren (Catherine), Darren (Debbie) and his many grandchildren; great-grandchildren. He will be sadly missed by his cherished brother Ted Baigent and family, as well as his many friends. Roy was born in Wimbledon, England in the year of 1927 and immigrated to Canada in 1954 where he worked at Malton Airport including the Avro Arrow. He had an entrepreneurial spirit and had many professions including working as firefighter for the Department of National Defense. Business’s included the sod company, Oro Station General Store, the Third Ear in Picton and Club Cedars in Cannifton. He retired from his career as a very successful real estate agent and was a developer of Bay Breeze Estate in Rossmore. In keeping with Roy’s wishes, cremation has taken place with a private family gathering. Memorial donations to the Alzheimer Society or Belleville General Hospital Foundation would be appreciated by the family. The family would like to thank Doctors, Nurses, Staff, Emergency Department and Palliative Care for their compassion. Arrangements entrusted in the care of Bay of Quinte Cremation Service (613-968-4807) 150 Church Street, Belleville. Online condolences welcomed atwww.burkefuneral.ca