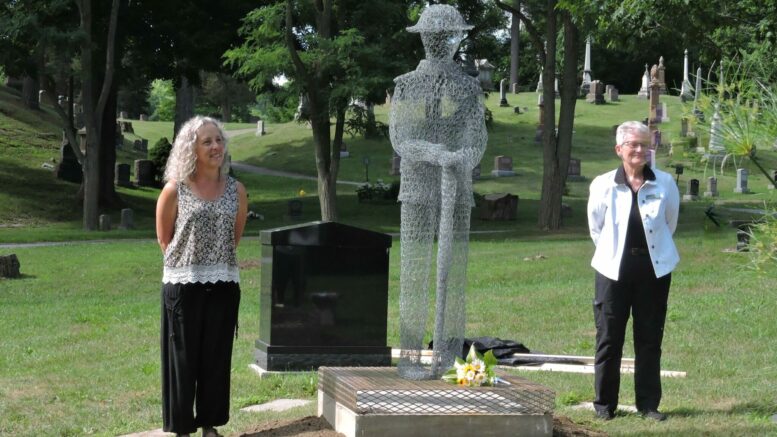 WE WILL REMEMBER THEM (From Left) Artist Danielle Reddick and Glenwood Cemetery Board Chair Sandy Latchford at the unveiling of a wire sculpture at Glenwood honouring the fallen WWII veterans laid to rest there. (Submitted Photo)

A wire sculpture created by a local Prince Edward County artist has been placed on the grounds of Glenwood Cemetery in honour of those veterans interred that fought in the Second global conflict of the 20th century.

On Thursday, Cemetery board members and artist Danielle Reddick gathered at Picton’s City of the Dead and her creation of a WWII soldier that will be on permanent display at Glenwood as a tribute to the veterans of WWII. The unveiling was originally planned as part of the 75th Anniversary of VE Day ceremonies that were to take place at The Armoury in Picton on May 9th 2020 but due to the covid-19 pandemic the event had to be cancelled.

Glenwood Cemetery is the resting place of approximately 15,000 people including over 300 veterans. Among the veterans buried here is a veteran of the war of 1812, and many veterans who fought in WW I and WW II, including 14 who died in action and whose graves are managed by the Canadian War Graves Commission.

For several years, Glenwood Cemetery held a special ceremony on the last Saturday of Legion Week to remember and honour all veterans.

However, the Board of Directors and staff of Glenwood Cemetery felt they could do more to honour all veterans in a more lasting way. While researching the various options to memorialize and honour veterans, the Board discovered the wire sculptures installed at Slimbridge Cemetery in Slimbridge England. The sculptures were made and put in place to mark the anniversary of the end of WWI.

“The Wire Soldiers sculptures are stunningly beautiful and were the inspiration for our Tribute to Veterans Project.”

“We chose WWII as the theme for the first sculpture to commemorate the 75th anniversary of VE Day. We hope that the community will enjoy the sculpture and will support future works of art in our Tribute to Veterans Project,” said Glenwood Chair Sandy Latchford, noting a plaque will be installed with the sculpture at future date.

The local resident is an award-winning multimedia artist who has called Prince Edward County home since 1984 and considers the sculpture to be her dream project.

Grants received from Prince Edward County Arts Council and The Huff Family Fund, managed by The County Foundation, were key to making this vision a reality and Latchford thanked those organizations by name  for their support.

“We invite the public to come and view this wire soldier sculpture which is located near the columbarium area at Glenwood,” the Chair said.