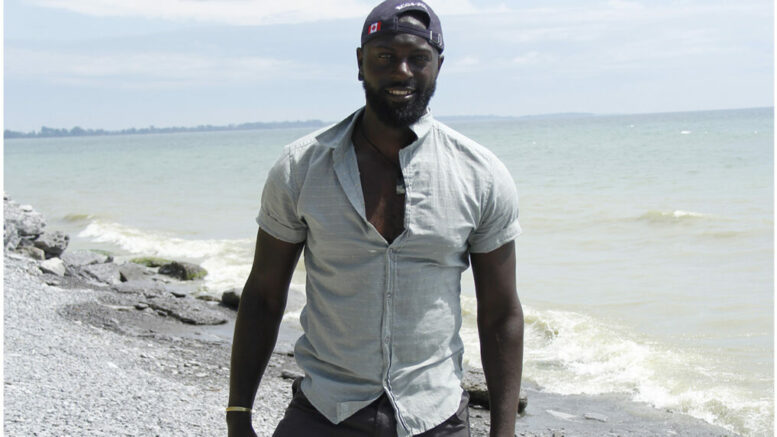 THE EXPLORER Mario Rigby took a break from his 20 day, 355 km kayak trip in Wellington on Monday. (Desirée Decoste/Gazette staff)

Committed to pushing the boundaries and limits of adventure travel, 34-year-old Canadian Explorer Mario Rigby made Prince Edward County a pit stop as part of his mission to paddle from Burlington to the Thousand Islands.

Known for his historic expedition crossing Africa, Rigby is currently  embarking on a new adventure kayaking across Lake Ontario to promote domestic travel and raise funds for at risk youth.

Rigby popped out of his kayak on the Wellington shores of Lake Ontario Monday at the  The Drake Devonshire and spoke to the Picton Gazette about his inspiration to paddle this part of the province.

On July 17 Mario embarked on his kayaking expedition that will take him the full length of Lake Ontario.

Rigby hopes this 355 km journey will also engage Canadians in conversations to support inclusivity and diversity in outdoor spaces. To further highlight this Rigby will be raising funds to support My Stand, a local grassroots charity that is providing mentorship and leadership training for youth in the city of Toronto.

“I’m doing a kayaking expedition from Burlington all the way to Thousand Islands to kayak the length of Lake Ontario for promotion of domestic travel within Canada, but also globally,” stated Rigby. “So trying to encourage people to travel, due to the COVID-19  Pandemic, within their cities or nationalities. The other purpose is to raise funds for a charitable organization called My Stand in Toronto which looks at youth who are financially not able to do adventures, and we teach them how to do expeditions, adventures and that in return gives them life lessons.”

Rigby believes the more access each of us has to the outdoors, the better it will be for everyone. Rigby’s goal is to both raise funds for My Stand and use his platform to inspire and teach young people how to overcome obstacles, which will include education on the importance of sustainable and responsible travel as well as engaging the outdoors as a tool for wellbeing and healing.

Rigby’s challenge includes a total distance of 355 km, that sees him rowing an average of 30 to 45 km a day. In total, that means 20 days on the water in rough, uncertain conditions with potential waves of 3 to 5 metres and replenishing over 6,000 calories per day while also finding places to park the kayak and shelter overnight.

“I kayaked Lake Malawi in Africa which is the forth largest and second deepest lake in the world,” Rigby said. “It’s about 550 km long, so it’s about 200 km longer then this trip and in comparison the waves are way smoother in Lake Malawi but there have been a couple of times I ran into thunder storms. Today is the strongest the wind has ever been on this trip coming in at 44 knots (82 km/h) so its been pretty rough but its been hot and nice. Every single time I kayak I just want to jump into the water.”

Rigby laid out a plan with 18 stops along his route and local stops included Presqu’ile Park and Rednersville.

Back in 2015, Rigby walked across Africa entirely by foot and is the only known man to have done that successfully from Cape Town in the South all the way to Cairo in the North. The Journey took him two years and one can imagine all the stories Rigby has of that trek which includes getting shot at by rebels, jailed seven times and attacked by hippos.

“I’m from the Caribbean originally born,” Rigby told The Gazette. “My dad’s Jamaican, my moms Bahamian and I had never been to Africa before that journey, it was just an interest of mine. I visited there because I thought it was a beautiful and fascinating place and I want people to see that part of the world in a way we don’t constantly see on media.”

Rigby was born in Turks & Caicos Islands and spent his childhood in Germany before moving to Toronto at the age of 16 where he always had a enormous drive to push the limits in athletics, exploration and anything he puts his mind to.

Rigby was inducted into exclusive members only organization The Explorers Club along side several astronauts.

Rigby is also a fellow of the Royal Canadian Geographic Society and The United Nations have called him one of the top 100 most influential people of African decent.

“Ever since I was a kid I always wanted to explore, I think every single kid does,” expressed Rigby. “Its just over time as we become adults we forget exploration is something we want to do. We think we need to have regimented serious work which is something I had to learn later on in life, was not the way I wanted to live. I wanted to live a life full of adventure, exploration and I wanted to share the discoveries with people around the world, including scientific research discoveries but also stories, I think the combination are very important so that’s what I live for.”