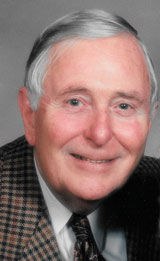 In Loving Memory
Garth Manning, Q.C.
Garth died peacefully at home on July 28th, 2019. He was literate, articulate, and kind. As a former lawyer, he enjoyed practising law and serving clients. His professional association was important to him and he gave much of his time to it, eventually becoming President. He used his skills as a lawyer to contribute to many community issues here in Prince Edward County. He was a serious railway buff, and had a life membership in the Severn Valley Railway in England, as well as a garden railway here in the County. He would do anything for his family, and he is very much missed by all of us. Linda Manning, Robert and Kimberly Lewis-Manning, Anne and Bob Hull, Douglas and Kelly Adlam, Susan Adlam and Ian Fellows, and grandchildren.