It was another of “those” summer weekends in Prince Edward County.

If you’re a resident that works Monday-to-Friday, you know the type. The kind of weekend where you avoid towns and villages and all the amenities that would make life livable in this community like the plague. That is, of course, if you were able to get near them or they weren’t shut down completely due to becoming a tourist’s toilet.

It would be incredibly hypocritical of your humble scribe to stand on a soap box and paint every person visiting Prince Edward County in the summer time as unwashed heathens looking to wilfully defile our community in a search of some sort of ultimate vacation debauchery, decrying tourism all the way. My parents made a pretty good living selling sweet corn and strawberries to passing motorists on County Rd. 10 for a time in the 1990’s and obviously the business end of Canada’s Oldest Community Newspaper relies on advertising from all sectors to ensure the odometer keeps turning over year-after-year.

There are literally hundreds of communities in Ontario begging to be in the situation Prince Edward County finds itself this summer-and seemingly every summer over the last two decades and presumably every summer until the end of time.

One of my family’s favourite summer time retreats to get away from here pre-COVID-19 is where steel rails that started in Picton and once led to a terminus alongside what a local newspaper called “The biggest and richest hole in Hastings County.”

When I manage to leave the editor’s desk for more than a minute and tell inquisitors where I’ve been, they ask what Marmora is like in the summer time. “Awesome! Like what Wellington was 15 years ago,” is my standard reply.

It’s a great little village and the surrounding scenary is an eye-pleasing example of the commencement of the Canadian Shield. Having the Trans Canada Highway slice through has helped. They have a few fast food amenities-most importantly a Tim Horton’s. They have their own version of an old Dukedome for the hockey players and a softball diamond on the banks of the Crowe River.

If you don’t think I glance at Marmora housing prices on MLS while waiting for backed up traffic outside my door in Bloomfield to clear, think again.

But the last time I visited on a long weekend, Marmora was quiet. There were a few pedestrians on the side streets but a number of businesses were closed. Tim Horton’s was busy but only as a stop off for people grabbing a coffee and stretching their legs as motorists did the Peterborough-to-Ottawa trek. It was likely too quiet in a way the Marmora and Lake town fathers would likely agree with if probed for their honest assesment.

Clearly there is a balance to be struck somewhere between homegrown harmony and being Ontario’s welcome mat. We have firmly hitched Prince Edward County’s economic wagon to a number of horses and the mare named tourism is in the lead. There will be no putting her back in the stall no matter how much half-baked braying by short-sighted locals there is to close the bridges to anyone unable to produce a municipal tax roll number.

However, we can’t continue to peacefully exist like we are so The Gazette has the highest of high hopes for a few items on the horizon in regards to tourism in Prince Edward County.

First, we applaud Mayor Steve Ferguson’s motion to create a tourism management plan for 2021. It’s a good first step in discovering what exactly is the lay of the land, how the municipality found itself so inundated with visitors this year and, hopefully, a way ahead to mitigate some of the issues we’ve seen recently.

Secondly, park entrance discussions with the Province must bear fruit. Minister of Environment, Conservation and Parks Jeff Yurek didn’t show up to spend time frolicking in the golden sand last week and Mayor Ferguson was armed with photo and video illustrations of kilometres of backed traffic outside Sandbanks and North Beach. Imagine being in one of those lines on County Rds 11 or 12 around mid-morning after travelling from Toronto, only to be told your dream destination is closed. Bad gas travels fast in the days of social media and Tripadvisor.com and that’s why there can be at least microbe of confidence the Province won’t dally in developing a solution. Their golden goose is under duress.

Finally, we hope there’s substantial headway between the province and the County on a per-car day visit levy to Sandbanks and North Beach that could provide infrastructure dollars to municipal coffers. Preferably any levy is retroactive to the start of 2020. After all, if Prince Edward County residents can’t enjoy their own summer haunts, it would be nice to know those usurping locals are paying for the upkeep of roads that lead to them. 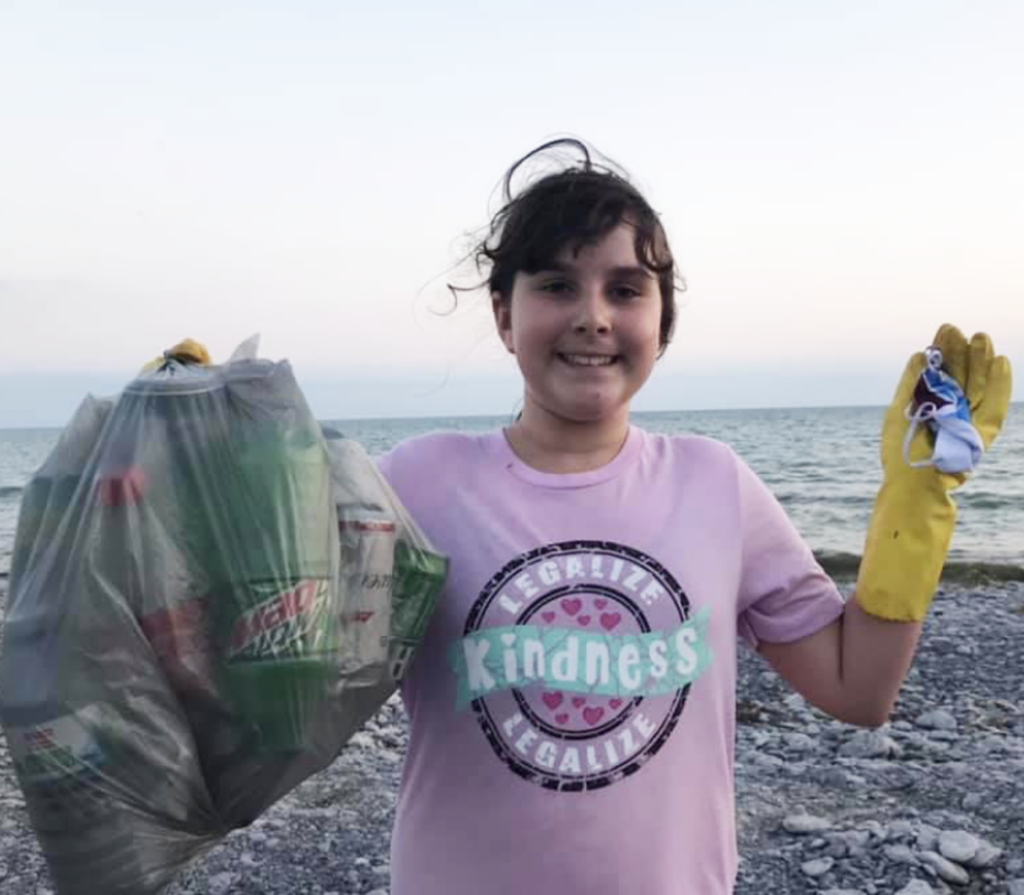 A SHINING EXAMPLE TO OTHERS – Armed with a pair of rubber gloves, a few plastic bags and respect and reverence for her home community, Sonrise Christian Academy student Emily Inwood took to Wellington’s Rotary Beach on Sunday afternoon to battle back against the inconsiderate and thoughtlessness of those litterbugs part of the weekend’s capacity crowds at the lake front. (Submitted Photo)