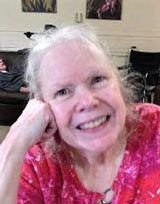 Marnie Klein (nee Reichert) returned to her Lord peacefully in the early morning hours of August 10th, 2020, with her beloved husband close by at the H.J McFarland nursing home in Picton, Ontario. Marnie was born March 26th, 1947 in Cleveland, Ohio to John and Alice Reichert. She lived and studied in Cleveland until she moved to Ann Arbor to study art and language at the University of Michigan. There she met and married the love of her life, Alan Klein, in December 1967. They moved to Ontario, Canada and she studied nursing at the Belleville Loyalist College of Nursing earning the Silver Tray Award for top graduating honors in 1987. She worked in many nursing and private homes. Marnie was a natural caregiver and healer. Her colleagues found her work superior. Her patients always knew she was focused on their happiness as well as health. She assisted everyone she knew was dying in their transition to the other side, both young and old. While she studied and worked in nursing she and Alan created ‘Story Book Farm’, a small sheep farm in Colborne they loved. Later they moved into dairy farming in Prince Edward County. She loved all the animals she cared for and named and knew each one. Marnie considered her published children’s book, The Stanley Saucer, to be one of her greatest accomplishments. Her book was met with excellent reviews and was a bestseller. Marnie was a deeply compassionate, sympathetic and giving person. She is remembered by her family and friends as being one of the kindest people they’d ever met, and she was loved by all. She was friendly to everyone she encountered whether she knew them or not. She changed lives for the better in so many direct and in-direct ways that she truly made a positive and lasting impact on our world. Marnie was a bright beacon of light, love and positivity to all and she will be deeply missed. Marnie was preceded in death by her mother and father, her brothers John and Dave Reichert, her brothers-in-law, David Klein (Barbara Armstrong) and Roger Towne. She is survived by her husband and best friend, Alan Klein, sisters-in-law, Carol (Klein) Towne, Judy Reichert and Lynn Reichert, 13 nieces and nephews, many grand nieces and nephews and a great grand nephew. In lieu of flowers, donations can be made to the Ontario SPCA. A memorial service will be held at a later date. Arrangements entrusted to Whattam Funeral Home 33 Main Street, Picton, ON www.whattamfuneralhome.com