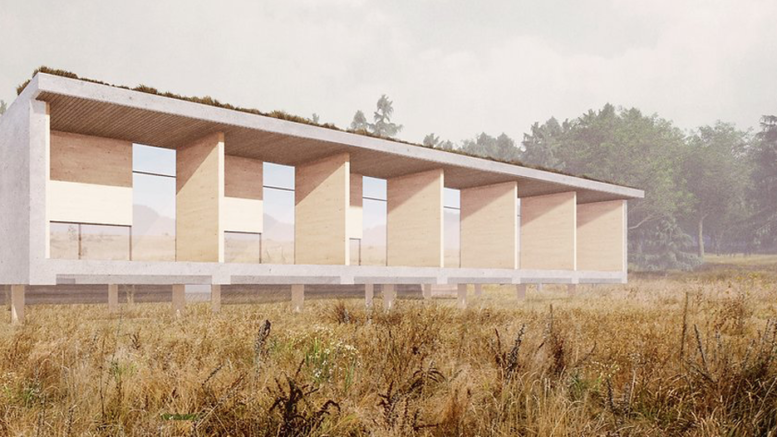 COMING SOON TO PLANET IRTH An artist’s rendition of a proposed 30 room Hotel and spa located on 89 acres in North Marysburgh near Rock Crossroad. (Irthlandscapehotel.com)

If all goes according to plan, a new self-described eco-retreat, the Irth (Pronounced Earth) Landscape Hotel and Spa, could soon grace the wilds of Cressy. Recently, Brian Daly and Alex DaPrato presented their plan for the retreat to the Environmental Advisory Committee (EAC). In concert with this, the EAC also received a presentation from Save Our Heritage Lands (SOHL), a group firmly opposed to the development.

On their website, Irth is proposed as being an “eco-retreat in a less travelled region of Prince Edward County.”

With a 30 room hotel and spa facility intended to entice visitors year-round, the concept of Irth is hinged on Forest Therapy, wherein guests are offered a “reciprocal relationship with nature”. Yearly, they hope to entice between 30,000-50,000 guests.

The hotel will feature a sustainable main lodge, replete with green roofs and passive, round earth walls. There will be an onsite restaurant, a guest lounge, event space and 12 individual cabins.

The 1,392 square metre spa will have capacity for 50 guests and be open to the public. As per their website, the spa is intended to be an immersive experience within nature.

All told, the retreat will span 89 acres of land sandwiched between County Road 8 and Rock Crossroad. Some work is already underway, with trees and brush having been cleared in certain areas to make way for the retreat.

According to the Irth presentation given to the EAC, the site is divided into four zones. As stated, their vision for zone one includes a “high eco-functioning, native forest with a healthy leaf litter, under-story (herbaceous plants, woody shrubs and young trees).”

Zone one will be the site of the spa, which “will require some beautification work.” This includes clearing of the limestone escarpment of non-native species.

Zone two is noted as having a thin layer of soil. This area, which includes the upper escarpment, will be planted with native grasses and wildflowers.

Zone three consists of two fields to be restored to a native meadow habitat, with native wild grasses and flowers along with food for foraging.

Zone four, which contains a small stream running from Lost Lake to Lake Ontario, contains a beaver dam which is noted as having caused flooding in bordering fields. The back section of that area, according to the Irth presentation, will be replete with trees, shrubs and undergrowth “consistent to that ecosystem”.

However, before the Irth dream can be fully realized, the land in question will have to be rezoned which will require an amendment to the municipality’s Official Plan along with a zoning bylaw amendment.

Currently, the land is zoned rural and environmental protected and would need to be zoned tourist/commercial in order for the retreat to move forward.

Irth proponents have submitted the necessary applications to the municipality and have completed the compulsory studies, such as an Environmental Impact Study and a Hydrogeological Study, among others.

Following the proponent’s virtual consultation session held May 29th, the submissions were to be presented to council within three months, whereupon council would review the material and make a decision as to whether or not the project can proceed.

Speaking on behalf of opponents of this project was Margaret Martin, member of SOHL. Broadly speaking, Martin cited a lack of public consultation and concern for the environment as being top reasons why she and others oppose the retreat.

Martin questioned why, after the initial information session held in November 2018, the following session was cancelled. Most recently, she described a public consultation session akin to webinars wherein the public were free to ask questions ahead of time, but organic dialogue was lacking.

“There was no ability to ask questions as part of an ongoing discussion,” she said. “It was moderated by someone who favoured their (Irth’s) position and, in some cases, was cutting the questions short or not providing the appropriate context of the question.”

Like some other lands up for development in the County, the proposed site of Irth was prime agricultural land until 2017.

“This land was originally prime agricultural land. It was subsequently rezoned to rural residential and now the new owner is seeking to rezone it to tourist commercial,” explained Martin. “If you look at the map, it’s part of a natural green wildlife corridor that runs from County Road 7 to County Road 8. It is next to the Lost Lake Wetlands, which there are provincially significant wetlands and it is an area containing an environmentally protected escarpment that’s also an area of natural scientific interest.”

Part of the Irth plan is to revert the natural habitat of the site to it’s “pre-colonization” glory. The site is reportedly overrun with Dog Strangling Vine, Buckthorn and other non-native species, as well as the ever-present scrub cedar

In the world of ecological restoration, some restorationists believe secondary forests (those that arise naturally after the destruction of virgin forests) are non-natural. In Prince Edward County, those secondary forests often contain a large amount of scrub cedars which can be seen dotting the landscape.

Other restorationists maintain secondary succession forests are critical for the evolution of healthy ecosystems.

The group also intends to eradicate Giant Hogweed and Wild Parsnip on their property-a burgeoning problem in this part of the world thanks in part to climate change.

In speaking about the proposed ecological restoration work, Martin questioned the intent of Irth’s proponents.

“They will have to scrub basically all the land. They will be removing what nature has provided and installing the nature they deem is correct,” she said. “I would call that a considerable amount of hubris and human-kind hasn’t done so well with that before. Even the way the pre-construction work has been undertaken, how the escarpment has been basically clear cut, strikes me as counter intuitive to what they purport to be.”

With a spate of new developments in the works, the proposed retreat is just one of many. Though Martin concedes one or two unto themselves may not pose a threat to the local environment, she believes the number in progress is worrisome.

“There’s an overall concern here, among many of us in this group (SOHL), about the parsing out and cumulative impact of rezoning and development projects within the County at large,” expressed Martin.

Martin stated the planning department had iterated they would work with the developer until the project could be supported.

“Why are people who are heavily invested in the County, pay taxes, live here, work and volunteer here basically fodder in this kind of development exercise,” she questioned.

Should the application for the development move forward, the Irth Landscape Hotel and Spa could become reality for Summer 2023.

To view the presentations made by both Irth and SOHL, please visit the municipal website here: https://princeedwardcounty.civicweb.net/filepro/document/200321/Environmental%20Advisory%20Committee%20-%2013%20Aug%202020%20Agenda.pdf?widget=true