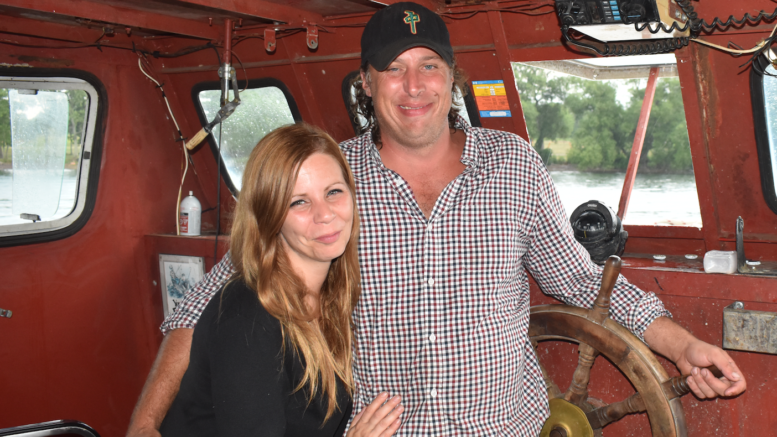 For the first time in nearly a decade, a local couple are offering chartered tours to visit a sacred site in Prince Edward County lore.

Mitch and Sara Harrison have taken the opportunity of a slow down in Mitch’s commercial fishing business to offer trips to Main Duck Island, a 570 acre spit of land some 20 kilometres south of the tip of Long Point and just a few scant nautical miles north of the Canada-U.S. boundary in the middle of Lake Ontario. Mitch explained that COVID-19 has affected Ontario’s commercial fish processing plants and his filled quotas for the whitefish, walleye and perch fisheries he would normally be netting in 2020 haven’t materialized. Harrisons have been on Lake Ontario waters around Prinyer’s cove and North Marysburgh for  generations and the family name is synonymous with commercial fishing in Prince Edward County.

“COVID-19 caused the commercial plants to get shut down and they really haven’t gotten back up to full capacity so Sara and I decided we had to try something to keep the boat on the water and make some money during the slowdown,” Mitch said.

“I know there’s quite a few people that have always wanted to go over there and see the Ducks (Main and False Duck Island) and we wanted to share that with them. There’s not too many ways to get over there if you don’t have a substantial vessel,” Mitch explained.

Harrison said he’s undertaken about 10 trips so far this summer and the ratio between local and visiting groups to Prince Edward County has been 50:50. For the cost of $75 per person (Maximum of 12) or $600 per day for smaller groups, Harrison will ferry people over to Main Duck for the day and offers the tastiest complimentary fish fry shore lunch around.

“People are free to wander and check it all out. We are over there three-to-four hours or longer depending on the weather and the group,” Harrison said.

On Saturday, Captain Mitch’s Boat Tours delivered a group of excited geocachers to the Island while on Sunday, the Gazette was to make its first trip to the Island since 2007. At least, that was the plan until a massive weather system out of the south brought heavy winds and 12 foot rolling waves to the Gap near the Lennox Generating station.

“It’s completely weather dependent, we won’t risk people’s lives just to go visit Main Duck,” Harrison said. “The islands will always be there for another day.”

An enjoyable day travelling up the Napanee River became Sunday’s main task and it was achieved with great success.

Main Duck is steeped in Prince Edward County history and miles of Lake Ontario’s roughest water when the winds are up blowing in the summer time keeps it just out of reach from regular travel.

The Island is considered part of Prince Edward County and while there are no inhabitants at this time, when the island was held privately, it’s owner and those living there would have been eligible to vote in municipal elections and would have paid taxes to South Marysburgh Township.

Evidence from archaeological finds on the island indicate indigenous people were visiting and using the island as early as 450 BC and that Iroquoian peoples were on it as late as 1450 AD.

European settlers started building fishing camps in the early 1800’s and Captain John Walters, believed to be the first actual title holder of the island, built a schooner there called the Harriet Anne in 1865.

Former Gazette columnist and Prince Edward County’s preeminent authority on the island’s natural state, Terry Sprague is the last known guide to offer walking tours across the island and he said he was quite happy to hear that Mitch and Sara had started up a charter tour business to deliver people to Main Duck.

“For a quite a few years after I’d stopped going with groups over to Main Duck in 2012, I’d field 50 to 100 inquiries annually about if I was going again and was there anyone that would take a person or group over,” Sprague told the Gazette on Monday. “There is quite a desire to get over there and have a look around and see it for yourself.”

Sprague’s tours often delved deep into both the natural state of the island including flora and fauna, birds  and wildlife inhabiting the island as well as the more modern history of the Main Duck Island.

Perhaps the most massive legend of the island in more recent times was how Claude “King” Cole came to own the island starting in 1904 and ran it as his nickname namesake would indicate.

Simply put, this gregarious and crepuscular character ran the Island as his own kingdom and King Cole was King, Mayor, President and CEO of Main Duck Island.

“He bought it for $1,200 and he leased quite a bit of it to commercial fishermen and there were more than a few that were over there during the season,” Sprague recalled. “He had horses and livestock on the island as well.”

King Cole would communicate with the outside world by writing a message five times and inserting them into five separate bottles. Waiting for the currents and winds to be just right, he would heave the bottles offshore and a person on the south shore of Prince Edward County monitoring for the missives would collect the bottles and determine the next course of action (supply and medicine delivery, etc.).

Prohibition fitted a smooth operator like King Cole, a native from Cape Vincent, NY, just fine. The County legend was a rum runner himself and sold safe storage to his fellow rum runners in the fishing houses on the Island.

Just out of the grasp of U.S. Federal agents trying to enforce the Volstead Act, the houses were stacked to the roof with cases of whiskey, gin, rum, etc. where they sat until the cover of night allowed the fast boats to deliver along the southern Lake Ontario shoreline in New York State.

Cole would see the end of prohibition in 1933 but didn’t make it to see the end of the Great Depression and died in 1938. He is one of the City of the Dead’s citizens in Glenwood Cemetery. “I go and talk to him quite often when I take a stroll there,” Sprague laughed. “It’s a pretty one sided conversation.”

Not long after King Cole’s rule came to a close, a more international power broker would own Main Duck Island but his time was much more muted than the predecessor.

The Dulles family’s legacy in Washington, DC is well known among American historians with relative’s serving in the President Benjamin Harrison administration in the 1890’s.

Secretary of State John Foster Dulles under 34th U.S. President Dwight Eisenhower found sanctuary on Main Duck from the hustle and bustle of rebuilding Europe after World War II and being a staunch anti-communist in the early days of the Cold War.

While Dulles’ cabin was lost to fire, the hearth and chimney was still standing the last time Sprague visited.

“We tried to maintain the trail from the Parks Canada dock that goes out to the lighthouse and have it go past the site of the Dulles cabin where you could see where this person of such importance in American politics would spend his summers,” Sprague said.

While Dulles was known as a DC power player that helped develop the North Atlantic Treaty Organization (NATO), he was known on Main Duck as the American that was fond of swimming in a cove near his cabin.

Where does the truth begin and the tall tales end? The tales seem to grow taller by the nautical mile as you approach Main Duck Island.

And of course, the Main Duck Lighthouse built in 1914 and lightkeeper’s residence, a beautiful well built duplex erected in the middle part of the last century, are the must see landmarks that are still standing.

For the better part of a century, County men and their families (in the summer time) would work during the shipping season to ensure that large boats wouldn’t wind up at the bottom of what was called “Lake Ontario’s Graveyard.”

Sprague said that in 2012 the roof started to leak and he doesn’t know what current state the home is in. The lighthouse is locked and the site is owned by Parks Canada but isn’t maintained.

Automation in 1978 ended the legacy of families tending to the lighthouse during the shipping season. Legacies of County families such as Bongards, Mains, McConnells, and Thomas’ went the way of every other staffed lighthouse in this part of Ontario and with it, a part of the lore of this almost mythical place in Prince Edward County that you have to see and step foot on to believe.

“There’s a lot of Prince Edward County history and it’s a pretty unique place,” Harrison added. “I think that’s why people want to check it out and Sara and I are happy to take them there.”