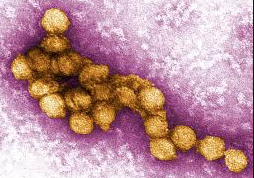 While a pair of people in Prince Edward County have tested positive for the novel coronavirus, there’s another viral malady that’s been discovered among the local populace.

This is the first direct evidence of WNv in the Quinte area this year, although regular mosquito surveillance is conducted by Hastings Prince Edward Public Health (HPEPH) throughout the summer.

In response, HPEPH is applying larvicide within select locations of Hastings and Prince Edward Counties until September 7, 2020. This mosquito larvae control measure is being conducted under the authority of the Acting Medical Officer of Health to prevent the development of mosquitoes into vectors of WNv. ‘

According to HPEPH, The pellet formulation of the larvicide Methoprene (PCP number 21809) will be placed into catch basins that contain standing water. All larvicide will be applied by technicians trained by the Ministry of the Environment, Conservation and Parks.

Early symptoms of WNv can include fever, muscle weakness, stiff neck, confusion, severe headache, sudden sensitivity to light, tremors, numbness, or vision loss. Most infected individuals have mild or no symptoms. In severe cases, WNv can cause inflammation of the brain known as encephalitis. If individuals believe they are experiencing early symptoms of WNv, they are encouraged to contact their primary care provider.

“West Nile virus is an infection transmitted to people through the bite of an infected mosquito. Although the likelihood of getting a West Nile virus infection is low,” said Dr. Alexa Caturay, Acting Medical Officer of Health at HPEPH. “There are simple precautions that residents can take to protect themselves and their family against mosquito bites when outdoors.”

To prevent mosquito bites and reduce the chance of getting West Nile virus:

Each year, HPEPH monitors the adult mosquito population during summer months using light traps baited with carbon dioxide at various locations throughout Hastings and Prince Edward Counties. The traps are monitored on a weekly basis, and trapped mosquitoes are shipped to a laboratory where they are tested for WNv, to track the presence of the virus in our region.