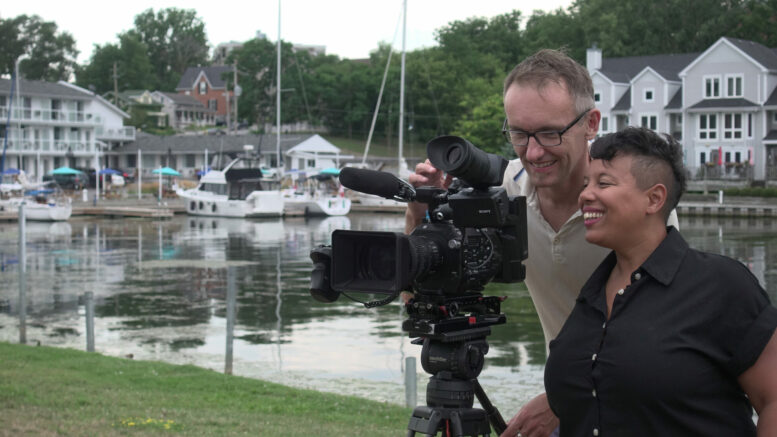 Filming concluded earlier this month  on a new documentary series which celebrates a number of people who’ve come to live in Prince Edward County. Chrystelle Maechler, writer, director and producer of A New Place Called Home, said she was inspired by the participants resilience, courage, and strength.

“Maybe it’s something in the water!” Chrystelle jokes, “Or being surrounded by all these incredible people we’ve been filming has just given us that extra boost of motivation to tell the stories that move us.”

This new series which follows six now-local individuals or couples, includes Melissa Cannons and Paul Tobias of Idle Wild, Aaron Armstrong of Blue Wheelbarrow Farm, Susan and Glen Wallis of AWAY in the County and Wallis Awards, Alison Lawtey of The Acres at High Shore, Joaquim and Amor Conde of Quinta do Conde and Sleiman Al Jasem of The County Catch and will all have a 10 minute segment that details their life before coming to the County and what life has been like since resettling on this mostly rural island.

“It was exciting to be filmed and interviewed about things we’ve accomplished since moving to the county,” Glen Wallis told The Gazette. “What was unexpected was it made us think about the future more and specifically slowing down which we are not very good at, or at least I’m not. I’m excited to see how all the footage will be paired down to 10 minutes.”

Andreas Krätschmer, Maechler’s husband is the Director of Photography and Editor of the series.

When the creative couple, Maechler and Krätschmer relocated to Picton in 2019, their intention was to continue with their freelance film and television work but A New Place Called Home has inspired them to start creating more of their own work.

“This project has introduced us to even more people and places in the County,” said Andreas. “It has reinforced to us what a special place this is, and reminded us why we ourselves have chosen to call this place home.”

A New Place Called Home will be available to watch on-demand this fall on Bell Fibe TV1.

“Being a part of A New Place Called Home has been an enriching experience,” expressed Susan Wallis. “It has allowed me to take a moment from our busy lives to pause and reflect on how and when the process started, the planning it took to get here and what we have accomplished in this new place we now call home.  Its been a journey.  It leaves me excited about what the next phase will be.”