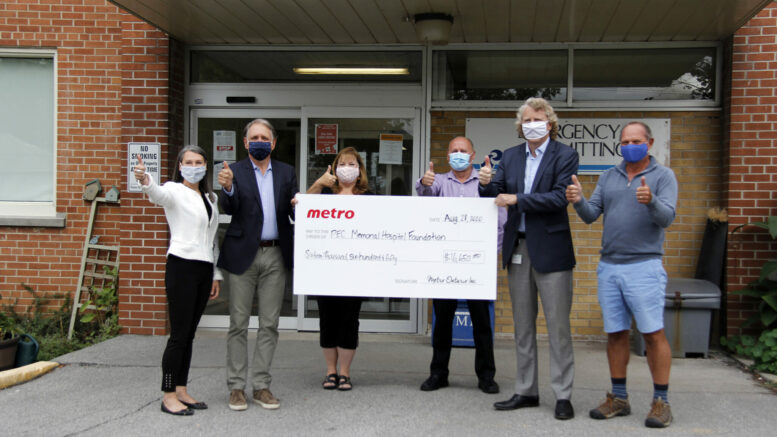 With a two-week fundraising campaign wrapped up, Picton Metro proudly announced Friday that a $11,650 contribution was being made top Prince Edward County Memorial Hospital Foundation’s (PECMHF) Back the Build initiative and with Metro Inc. head office topping the funds up with $5,000 for a total $16,650.

As well as the contribution in 2020, Metro has also committed to hold the same fundraiser annually for the next three years.

“The impact of this campaign has been felt deep in the hearts and homes of the local community we serve,” said Murray Lupenette, store manager of Metro in Picton. “I am incredibly proud of our staff and thankful to our customers for their generosity.”

“A few years ago we did a bit of a review on how we go about fundraising at Metro,” stated Andre Gagne, vice president of Metro. “And being a Toronto-based company what we found was the people who fundraise at stores were much more engaged if they could be asking their customers for money that goes to something directly in their community so we flipped up the Toonies for Tummies program so the money that gets raised in a particular store goes to a school feeding program in that area, and what we saw was an exponential rise in peoples willingness to give and so we applied that model here saying we’re going to raise money in Picton for the Prince Edward County hospital and honestly it worked out well, people are happy to support their local stuff.”

In making this three-year commitment to the PECMH Foundation, Metro builds on long-standing support for the Foundation that’s shared within the local business community. Metro’s head office and the employees working at the Picton store are defining ‘exceptional’ this summer with their amazing act of kindness and leadership for this important campaign.

“Metro is a community within itself but embodies the giving spirit of our entire community within The County,” Shannon Coull, executive director of the PECMHF expressed. “We’re just so grateful for you (Lupenette) being there to help facilitate it and empowering your team to try their hands at fundraising. it’s hard to ask people for donations but because your employees care so much and believe so much in our hospital and having access to care close to home, they really rose to the challenge so we’re extremely grateful and it was very touching to witness it in action so we extend our heartfelt thanks to Metro employees and thanks to Metro the head office.”

This support from Metro will directly impact the future of health care delivery in Prince Edward County. The grocery retailer is thrilled to be extending their partnership with the PECMH Foundation.

“It goes without saying, we’re really proud of what our Metro store in Picton did and Murray (Lupenette) and his entire team were very enthusiastic about the whole thing and it really made it happen,” said Andre. “And Murray (Lupenette) as a Metro leader, we’re really, really happy too have a local person running our store, it makes a big difference, and my wife tells me Murray is always visible on the floor. It really makes a difference being out there.”

With annual sales of more than $16 billion, METRO Inc. is a food and pharmacy leader in Québec and Ontario. As a retailer, franchisor, distributor, and manufacturer, the company operates or services a network of some 950 food stores under several banners including Metro, Metro Plus, Super C and Food Basics.

“I appreciate the opportunity to say on behalf of the board of directors that this is such an important job for us to be doing in this community,” Barbara McConnell, PECMHF board chairperson said. “The Foundation has a responsibility to not only raise the money to build the new hospital, but also to make sure this hospital has the equipment it needs on an ongoing basis to deliver the healthcare we need for our community day-on-day.

“And so to have the support from a company like Metro living in our community and a representative of our community in so many ways, is at the very essence of what we are able to do and we can not thank you (Lupenette) enough for being there for us to taking this kind of leadership, to helping us get to the point where we can say ‘yes we made it’ and we look forward to that day down the road when we can announce we’ve made it and it’s going to be with your help, thank you,” McConnell added.

With fall just around the corner, Metro looks forward to working with parents and guardians as they begin preparing for their children to return to school.

“It really struck me the day we had the promotional day at Metro,” said Nancy Parks, Back the Build campaign co-chair. “When I was driving home I was thinking, Murray (Lupenette) you really provided an opportunity for everybody in this community, including visitors who are important too, but also for the people who live in this community to be part of this project. They can say they’re part of this new build, they have ownership in the new hospital and that’s priceless and wonderful for them to be able to say they also own this hospital with the toonie they gave, so thank you for doing that not only for your staff to be able to be a part of that but also everybody in the community who passes through the doors at Metro.”