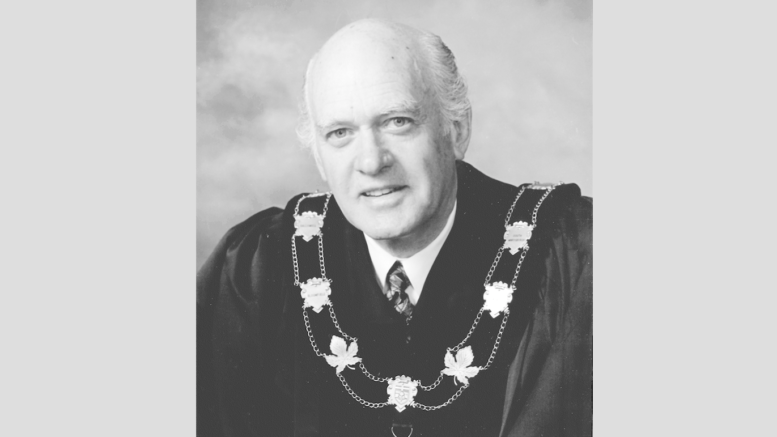 The first mayor in the history of the amalgamated Prince Edward County has died.

After serving as MPP for Prince Edward-Lennox and holding a number of portfolios as a Cabinet Minister, James (Jim) A Taylor was elected to wear the chain of office as Mayor of Prince Edward County in 1998 when the municipality transitioned from a collection of townships to a single-tier entity and was re-elected in 2001.

Taylor passed away on Tuesday.

Born May 2, 1928, Taylor would come to represent the riding of Prince Edward-Lennox at the Ontario Legislature after a failed bid to enter federal politics in 1968, running third in his home Scarborough East riding.

Taylor would find favour with local voters and was elected to the Ontario legislature in the 1971 provincial election, defeating Liberal candidate Barry Young by 3,404 votes in Prince Edward—Lennox and he and his family would establish a home in Prince Edward County.

Taking the place of the retiring Norris Whitney to uphold the Progressive Conservative banner, Taylor served as a backbencher in Bill Davis’s government for the next four years and was re-elected with a reduced majority in the 1975 election.

On October 7, 1975, Taylor was appointed to Davis’s cabinet as Minister of Community & Social Services.

Taylor was named as Davis’s Minister of Energy  in 1977 and was re-elected with a greatly increased majority in the 1977 election.

He was dropped from cabinet on January 21, 1978, and again served as a government backbencher. He was re-elected in the elections of 1981 and 1985.

After serving in government for forty-two years, the Progressive Conservatives were reduced to a tenuous minority government in the 1985 election, and were subsequently defeated in the legislature on a motion of non-confidence. Taylor served in opposition as his party’s Energy Critic but did not run for re-election in 1987.

Taylor would remerge into political life in the late 90’s and come to the head of the Shire Hall horseshoe as the Municipality of Prince Edward County took its first breaths after more than a century and a half of two-tier governance.

Former Sophiasburgh Couincillor Kevin Gale was also first elected in 1998 said he and Taylor agreed to disagree on a regular basis but the newly-minted Mayor was crucial in those early days.

“He was the right man for the job. Period,” Gale told the Gazette Wednesday.

In the earliest days of tribal politics at the forcibly amalgamated Shire Hall where virtually every representative was there with one foot in the ‘Come together” camp and the other in the “Looking out for my township” camp, it was Mayor Taylor’s job meeting-after-meeting to broaden prospectives and keep local government afloat as frayed nerves were soothed and communal order was instilled.

“Politics was in his blood and I’ve always said Jim Taylor has forgotten more about politics than I could possibly know in a life time. He was a wealth of political knowledge that we sorely needed at the time,” Gale said.

Right out of the chute, the municipality was tasked with figuring out how to take on police services and land ambulance, formally creatures of the provincial government that were downloaded to municipalities.

“Basically it was everything. We were in our infancy and we had highways and social services, police-things we had never paid for before. We had the sale of the Picton Utilities to deal with. It was all uncharted territory for Prince Edward County and everyone coming from the townships had no idea,” Gale recalled. “Because Jim still had contacts with Queen’s Park, that was able to help us deal with some of those issues and he was able to get us all onside and help us stick handle through it.”

Past Mayor Robert Quaiff told the Gazette he upholds a memory of a kind note Taylor sent him after losing a very close race to the late Ron Everall for the seat representing North Marysburgh in the mid 2000’s.

“I remember people asking me about a recount and I said ‘No, I fully trust the people of the ward and the municipal staff’ and that trust and respect was something I learned from James Taylor.”

In the note, Taylor wrote Quaiff should not lot this loss affect any future decision on running for council.

”He said ‘You have a great future and I foresee a long future in municipal politics or higher’ and that ‘I can see you one day sitting in the Mayor’s chair’. Those were the kindest words anyone ever said to me about politics in my political career,” Quaiff said.

One former County of Prince Edward Mayor noted the way the patriarch of the position carried himself and ran a meeting. Professionalism and decorum exuded from Taylor during the busy moments of a meeting or the quiet hours at the Mayor’s office.

Like Gale, Quaiff recalled the early days of a fractured municipal government.

“It took Jim Taylor a long time to get that through our heads that we were one group representing all of Prince Edward County but even during those trying times, Jim was influential on myself on maintaining decorum above all else. If you check my record, I always attended a meeting with a shirt and tie on and that again is the type of professionalism someone of the character and quality of Jim Taylor impressed upon you when you served with him.

Prior to laying the building blocks of the current from of municipal government, Taylor served both the local electorate as well as the people of Ontario and it was under Premier Davis as Minister of Community & Social Services that Taylor would see the funding of 27 pilot projects across the province aimed at delivering care for seniors through community organizations. One of the projects was in Prince Edward County, a community with a high proportion of seniors. The pilot project brought together nearly 20 local groups to share information, coordinate activities, to conduct a needs’ survey, and to be catalytic in developing affordable and sustainable programs.

The 1977 project was the origin of The Prince Edward County Community Care for Seniors Association. 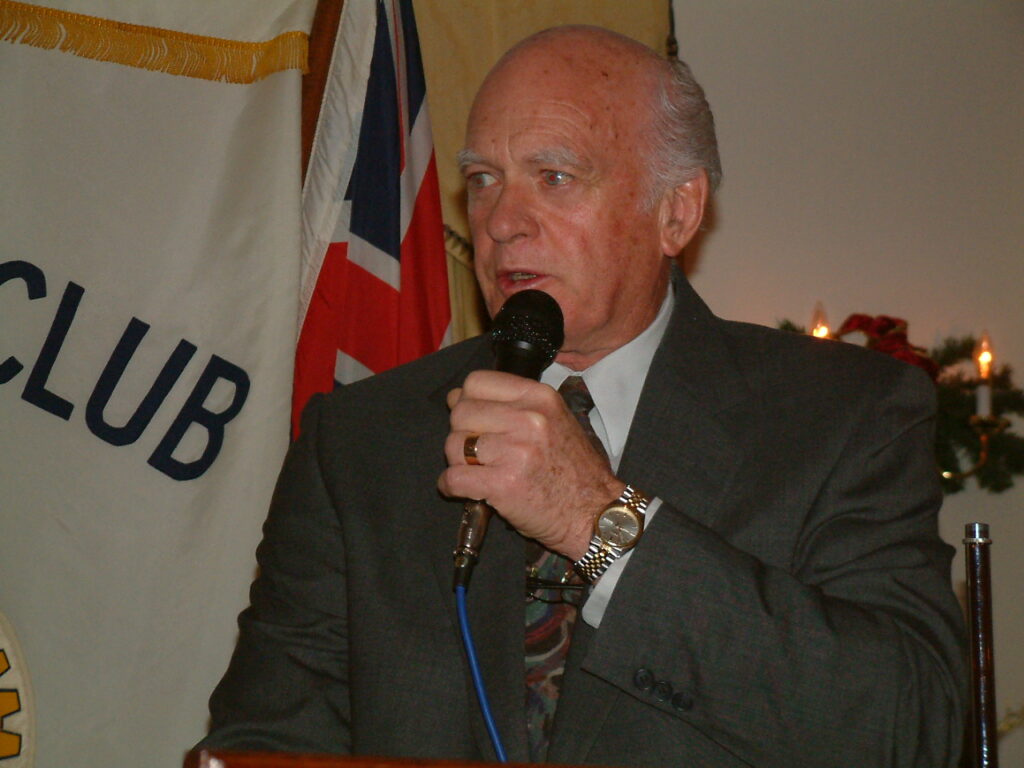 Then County of Prince Edward Mayor James Taylor speaks at the 2002 Charter Meeting of the Rotary Club of Wellington. (Gazette file photo by Ross Lees)

“(Davis) wanted me to become the Minister of Community and Social Services,” recalled Taylor in 2017 for a 40th anniversary profile celebrating the creation of Community Care. “He said the cost of the ministry was about a billion dollars a year and rising by twenty percent annually. That’s a lot of money to spend. I thought ‘Well, that’s a nice introduction to a portfolio. Now what am I supposed to be doing’?”

As he would two decades later for Prince Edward County but on a much grander scale in the late 70’s, Taylor was tasked with bringing together a myriad of organizations and services under a community construct that would deliver what was expected while remaining financially viable to the taxpayers.

“When I was first tagged by the Premier to take this on, I think he saw a tough, no -nonsense person who would just chop here, chop there and then we’ll get rid of him,” Taylor said with a laugh. “But the more I got into it, the more I liked it because I figured you could make a real, meaningful contribution… I think some of the other ministers were glad to see me moved to the energy portfolio because I knew the system and I am not a quitter.… Sometimes stubbornness is an asset…. I realized that these were real people you were dealing with and that’s very important.”

In reviewing programs to develop a new strategy, Taylor realized people were living longer and required more care, inflation would add to costs and traditional family supports for seniors were changing. And within the complex world of federal -provincial politics, national programs initially funded by the federal government were often downloaded to provinces and municipalities. The most cost effective model was to deliver programs through community – based, volunteer organizations.

Taylor successfully fought for a 5.5 per cent annual increase to the ministry’s budget to provide greater support for these agencies.

“Just the fact that they are there as someone you can call to address your problem is really, really important,” Taylor added. “These volunteer organizations also raise money. They do a lot of fundraising. There’s lots of competition to raise funds these days. But they are doing a great job. They’re needed and they are appreciated.”

Taylor’s efforts in the late 1970’s to enhance the life of Ontario’s senior citizens could never be lost on Community Care Executive Director Debbie MacDonald Moynes.

News of Taylor’s passing cast a pall on the Community Care offices at 74 King St.

“Jim Taylor cared about seniors and volunteers.  He cared about his community and all the citizens in Prince Edward County.  He was instrumental in establishing agencies such as Prince Edward Community Care in communities across the Province of Ontario when he was Minister of Community & Social Services in the 1970s,” MacDonald Moynes said. “Now 43 years later, our agency still supports seniors to  live at home.  We thank James Taylor for leaving a legacy of caring still being  enacted today through our volunteers every time they deliver a meal or call a senior to offer reassurance.  His death is a real loss and we send our thoughts to his wife, Mary.”

Current Minister of Community & Social Services Bay of Quinte MPP Todd Smith explained that he first met Taylor in the late 90’s when Smith was News Director at Quinte Broadcasting.

“He had such a significant task, bringing that community together but he was great at understanding the complexities of government and finding collaborative solution. He also had a great sense of humour. I spoke to him about a year ago and he was still quick with a joke- sometimes the same joke, but I know how much he and his family supported me and the Taylor family are really good people who care,” Smith said.

What’s evident when you hear people speak of the legacy of Jim Taylor is that whether it was at Queen’s Park or Shire Hall, the work and effort he put in was always a service of love and dedication.

“No question, he was someone who cared about people and wanted to ensure the people could get ahead whether it was in provincial politics and in the various portfolios he held at Queen’s Park -and he had fond memories of working there on behalf of the people of Ontario- but he always had the best interests of the people of Prince Edward County at heart,” Smith added.