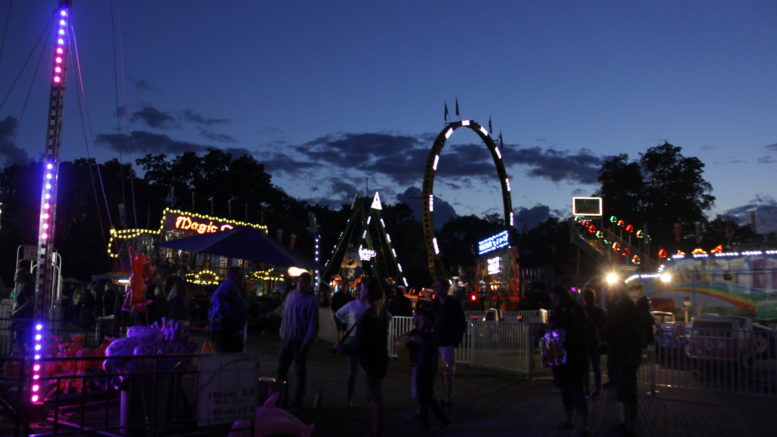 It will be a bitter pill to swallow this weekend for nearly all Prince Edward County residents as, for the first time since the Second World War, the Picton Fair won’t light up the early September sky at the Fair grounds.

Children with unbridled glee in their eyes, running up and down the midway en route to the next ride. All those long time entrants with pride in their hearts as they submit everything from art to baked goods to produce to be judged, weighed, examined and tasted. Local livestock producers hoping the best of their hooved herd might take a Best in Show ribbon. The delectable tastes and smells of the food court.

And of course, all those demolition derby drivers yearning for their place in the spotlight in front of family and friends.

But most importantly and a testament to the Picton Fair’s enduring legacy, a chance to see and meet with friends both old and new and share in the experience only the Picton Fair can provide.

All put on pause due to the COVID-19 pandemic.

While nothing can beat the second week in September when it comes to the annual gathering at the Fair grounds, the Prince Edward Agricultural Society (PEAS) have had extensive conversations over the summer after it was announced the 2020 edition would not go on as planned and an alternative to the fair has been developed.

The plan is to have a drive-thru festival on Oct. 3, 2020 on the Picton Fair Grounds. The idea would be people would drive in through the back entrance of the Fair grounds by the cattle barns and troll along the old racetrack  with displays and vendors set up. Food can be ordered  like any drive-thru and displays can be examined.

“With having the event on the track, people will stay in their cars and drive around it,” said Tina Hiddink, Secretary/Treasurer with the PEAS. “The track is actually large enough so if people want to look at something they can always stop but they have to stay in their car and allow other people can pass them.”

Hiddink explained the food court was a major draw to the Picton Fair in years past and the Oct. 3 event will allow those with a hankering for those deep fried or extra sweet goods to not be denied in 2020. In order to keep lines moving, items will be pre-made and ready to take away.

Event goers will be able to enjoy the event with no admission fee and people having a display setup will not be charged as well however donations will be accepted.

“The people who are going to be setting up a display won’t be charged any kind of fee this year,” expressed Hiddink. “The purpose is we want the community to recognize all these different organizations and not forget them because we never know what’s going to happen, especially in the future.”

Back in May, PEAS put out two surveys on their website with almost 200 people responding. One survey asked if people wanted a fair despite uncertainty of COVID-19 and almost 85 per cent saying No but wanted some kind of alternative event.

The second survey gauged what people would want to see in a proposed drive-thru such as harvest displays, arts and crafts displays etc.

“We had almost 200 people respond to the survey which really helped us out as well,” Hiddink stated. “Hopefully they are going to come out and support us because they had encouraged us not to have a fair this year but did encourages us to consider a drive-thru.”

With regards to organizing the Prince Edward County standard,  PEAS start planning for a fair a year in advance. By cancelling 2020’s fair, they’ve already started planning for 2021.

“The planning has always continued,” said Hiddink. “Also, part of the reason for doing this drive-thru is to keep the directors interested and to keep them involved. Some of the organizations we were contacting are just not doing anything this year, where part of this drive-thru planning has kept our fair board active because they are involved with the planning which is excellent.”

Even with all the negativity throughout the world due to the COVID-19 pandemic, PEAS have maintained a positive attitude.

“Our fair board has been positive this year even through COVID,” Hiddink stated. “But they were positive towards doing something else which is really great.”