The municipality could soon be clamping down on expanding cannabis production facilities.

A report from the Development Services Department regarding a Cannabis Interim Control Bylaw was brought before council at the Committee of the Whole Meeting Wednesday.

Council received the report for information while an interim control bylaw was approved and will reappear at the September 22 council meeting for enactment.

The report is the result of a directive issued from council during the August 6 Committee of the Whole Meeting, asking staff to formulate an interim control bylaw that would prohibit the expansion or growth of cannabis production facilities throughout Prince Edward County by the end of the third quarter.

As noted in the report, due to the recent legalization of growing cannabis, there is no formal definition, standards or dedicated permitted use for cannabis production.

For the purpose of the interim control bylaw, the report outlines a definition to be used for cannabis production. Cannabis production, in this context, means any land, building or structure used for growing, producing, cultivation processing, testing, destroying, storing, packaging and/or shipping of cannabis, licensed by Health Canada under the Cannabis Act.

A green house and connected buildings were once home to Celebrations Catering and now house what is presumed to be a medical marijuana grow operation of an unknown scale .

In his speech, De Haan decried the foul odour that permeates his neighbourhood due to the facility and bemoaned the lack of regulations placed upon these types of businesses.

“I feel a cannabis grow op should have restrictions similar to pig farms, and the reason for that is the odour,” stated De Haan. “I live 150 feet from the smell of dead skunks. Just drive in my back yard and open your windows. The smell permeates everything.”

De Haan further mentioned he has complained to Health Canada, but has received little in the way reassurance. 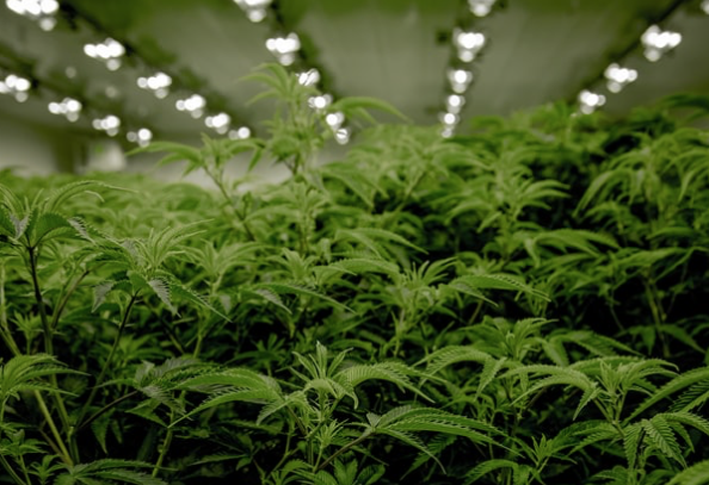 MEAN and GREEN A Health Canada licensed medical marijuana grow operation on County Rd. 28 has neighbouring residents holding their nose over the smell of the growing plants. (Unsplash.com file photo)

“I have spoken to Health Canada and put in complaints,” he said. “They can’t even tell me how this is affecting our health. From what I gather of other municipalities, it is up to council to create enforceable bylaws regarding this.”

Following De Haan, Councillor Stewart Bailey posed the first of several questions from around the horseshoe.

“Do we know how many facilities (grow ops) currently exist,” asked Bailey, noting that within the framework of the proposed bylaw, current operations would be allowed to continue.

James Griffin, planner for the municipality and author of the report, fielded questions. Griffin indicated that Health Canada is in charge of issuing licenses and, most often, is not required to alert the municipality when doing so.

“Unfortunately, it’s hard to say how many legally exist because these are licenses issued by Health Canada in which they do not have to give notice to the municipality,” Griffin explained.

As stated in the report, there have been 30 inquiries regarding cannabis production in recent months, along with bylaw related calls pertaining to odour and security concerns. Griffin noted that although Health Canada does not need to alert the municipality to these types of facilities, the municipality sometimes learns about them through such complaints.

Councillor Janice Maynard posited that it might be beneficial to have some sort of registry for cannabis facilities much like short term accommodations.

“It would be nice if when we have this bylaw we do get some sort of registry similar to what we might have for STAs,” said Maynard. “My understanding is they won’t be able to expand beyond the number of licenses they hold at the passing of this bylaw.”

Griffin clarified that should the applicant have a complete building permit application prior to the passing of the interim control bylaw, then they would be issued a permit. If, however, an application is not complete, then the proponent of such an operation would not be able to expand their facilities.

Councillor Kate MacNaughton inquired as to whether there is something that the municipality could facilitate in conjunction with Health Canada regarding minimum setbacks for cannabis production facilities.

“In anticipation of a bylaw restricting the behaviour or location of these operations, a couple of municipalities have sent requests to Health Canada trying to define minimum distance setbacks,” said MacNaughton. “Is this something that would be helpful for our municipality to engage in?”

Griffin countered that such a conversation is in the works.

“Funny enough, the manager of planning is on a teleconference with representatives from neighbouring municipalities and Health Canada regarding odour control, setback and how municipalities can implement these controls right now,” said Griffin.

The report and recommendations from staff were passed as a Maynard/Bailey motion, with the bylaw set to be enacted during the September 22 Regular Council Meeting.