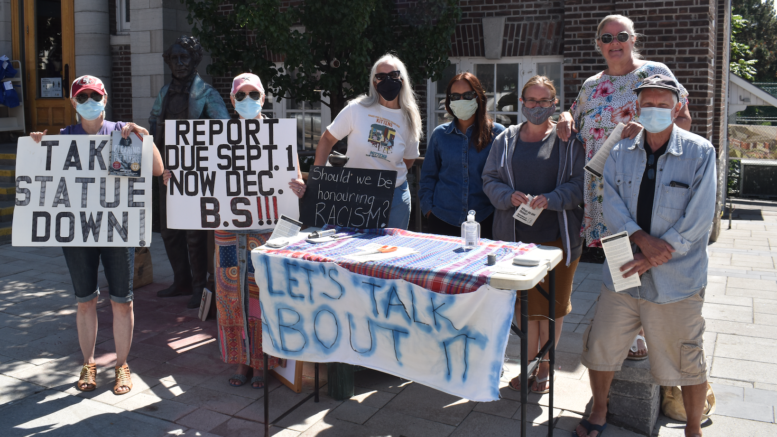 A group of local citizens eager to ask questions regarding the placement of ‘Holding Court’ brought their queries to the feet of Picton’s visage of the first Prime Minister late last month.

The group was handing out pamphlets engineered to spark dialogue and germinate thoughts and questions on, among other things, the modern day interpretation of Sir John A Macdonald.

Christine Renaud spoke on behalf of a collection of people with a common interest to pose thought-invoking questions regarding Macdonald’s statue in front the Picton Branch of the County of Prince Edward Library as this community starts accepting public input to coincide with the efforts of the Macdonald working group that will deliver a community-based recommendation to Council regarding Holding Court’s fate some time in 2021.

Renaud recognized Prince Edward County is in a time of transition when it comes to views on Macdonald’s legacy.

Around the time thousands were flocking to Picton’s Main Street on Canada Day 2015 for the Holding Court unveiling, Renaud penned an OP-ED that was raising several of the same questions that many are awakening to and researching the accurate recounts and answers for themselves. During a time of supposed celebration, Renaud’s public thoughts were received like a waiter that had shown up with a large bill prior to the desert course and none of the revellers were interested.

Juxtapose the Canada Day fervor of 2015 with the split feelings on Holding Court that exist in Prince Edward County today and it’s clear more and more questions are being asked about Ruth Abernathy’s creation, its genesis and why it holds such prominent real estate on Picton’s main drag.

Renaud laughed at the notion she was pointed at by some to be raining on the Macdonald parade.

“We are seeing more and more everyday an engagement into the full history, one not taught to you or I, and the legacy of Sir John A. Macdonald,” Renaud told the Gazette. “I wasn’t trying to rain on the parade but I felt like people might want to know exactly what was being celebrated. And I was super unpopular after that.”

An equal number of historians, scholars, history buffs are diving into Macdonald’s legacy through books such as James Daschuk’s 2013 Clearing of the Plains, a work Renaud cites as part of her more fulsome understanding of how brutal the policies and legislation created by Macdonald and his government were while Canada was in its infancy.

The questions posed by the group included the framing that while Macdonald was Canada’s first Prime Minister and laid the foundation for the country we know today, this was done on the back of Indigenous People with cruel and racist policies. “Is this something to be proud of and to honour with a statue on our Main Street?”

Another question in a town so reliant on tourism wonders if the statue of Macdonald is hurtful to neighbors and visitors-especially Indigenous and other people of colour, does that matter and why are some people so desperate to have Holding Court stay where it is?

“Then it’s liberating to know the truth and you want to do something about it. But the people in power generally don’t like to be questioned,” she said with a laugh.

In terms of the arguments the statue doesn’t endorse the atrocities connected to Macdonald as Prime Minister, Renaud said statues are about reverence and statues aren’t erected to honour people how have done bad things. She also said that statue removal doesn’t erase Macdonald from Canadian history and the accomplishments during his tenure.

“A lot of other people are feeling more and more that the bad things which is being the architect or a major player in what is called Indigenous genocide is more than enough to outweigh the those good things and have him on our Main Street,” Renaud said. “History exists and removing a statue does not erase it. Moving it does remove a symbol that is hurtful to so many people.