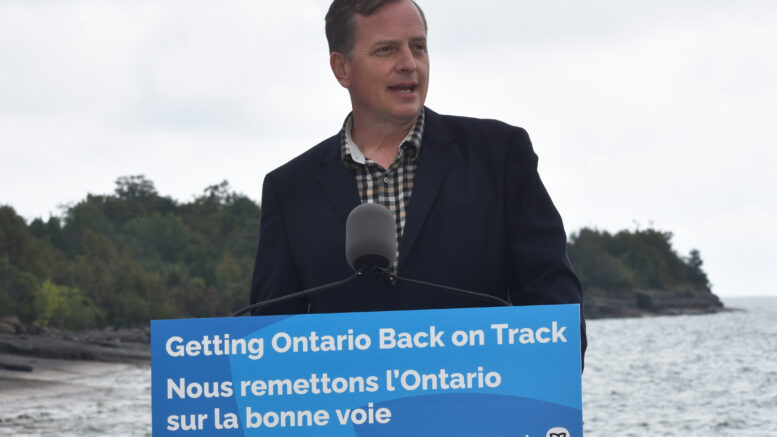 Minister of Environment, Conservation and Parks Jeff Yurek confirmed he and his staff were accepting input from municipal officials with regards to Sandbanks Provincial Park concerning traffic snarls that affected both visitors and local residents this summer.

The height of tourist season in Prince Edward County was a success story for the Provincial Park by way of day visits but the collateral damage as a result of this popularity was significant to local residents and those who were turned away due to early capacity days.

With regular closures on Fridays and the weekend before noon, late arriving visitors were shut out of attending the destination many had travelled for hours to enjoy and often found themselves stuck in car lineups that measured several kilometres long on County Roads 11, 12 and 18.

From the local perspective, residents around Sandbanks would find themselves confined to their own property or in some cases, taking up to two hours to travel two kilometres in order to return home from work, shopping, etc.

Yurek was in Prince Edward County on Thursday to announce his government’s intention to designate the Point Petre Wildlife Area and the Ostrander Point Crown Block as Ontario Conservation Reserves and confirmed to the Gazette staff in his Ministry is looking at a number of options to help mitigate the issues that arose this summer.

With border closures and regions of the country restricting access to travellers, people in Ontario and western Quebec travelled closer to home this summer and Yurek acknowledged that obvious trend.

Yurek said the system  “lost a lot of revenue” in April in May during the COVIND-19 shutdown but these past few months have made up a much of the difference because “everybody seems to be going to a park and I hope that continues.”

“COVID-19 has caused lots of folks to travel close to home and we love that but unfortunately we have to also deal with that. With regards to our Provincial Parks system, we are working with local municipalities to deal with the issues at Sandbanks but also at Parks right across the province,” Yuerk said.

County of Prince Edward Mayor Steve Ferguson and Bay of Quinte MPP Todd Smith as well as local business owners met with Yurek on August 5 to help the Minister understand the current layout of the Sandbanks entrance as well as the challenges locals are facing with very high traffic volume on regular, two lane municipal roads.

“We have short term and long term goals (with regards to Sandbanks) and we have a staff member that is in constant contact with senior staff at all provincial parks across the province,” Yurek explained. “We’ve already put forth a few changes to alleviate some of the traffic issues going into and out of the park and those started as ideas from local councillors in this area. We are going to move forward on this to make sure we see an enjoyable experience for not only those attending the park but also those living around the park so they can also enjoy their life and living spaces and that there can be economic benefit for having a provincial park in your area as well.”

“It’s up to us a government to work with municipalities to ensure that visits are orderly and preserve our nature and parks,” he added.