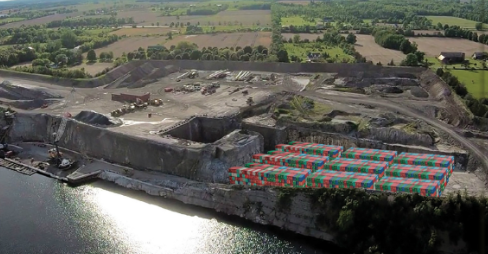 In response to the condemning peer review by IBI consultants regarding the proposed Picton Terminals (PT) transshipment and tour boat docking applications, PT has supplied a response in an effort to illuminate ground tread since the review came to light. Their response is now available on the municipal “Have Your Say” website.

The peer review, published in March, became available on the same website as of the last day of August.

As recently stated in an article published in the Gazette, the peer review in question noted several “gaps” in the PT proposals.

For example, IBI stated there was limited detail provided in the proposal regarding tour boat docking.

“In our view, the proposed Tour Boat Docking is poorly defined and not adequately justified. On the one hand, the applicant’s submission discusses potential tourism and economic impacts of this use, while at the same time limiting it to a floating dock with a bus-pick-up area and no other dedicated facilities or works,” according to IBI.

PT asserted that this issue has been flushed out with both IBI and the municipality.

“Through our spring 2020 meetings with IBI and Prince Edward County Planning Staff, we were able to clarify the requirements for welcoming Great Lakes Cruise ships to our port,” wrote Picton Terminals spokesperson Sandy Berg. “These are all typical steps in a planning application review.”

The consultants also referenced the Official Plan-a tool used by the municipality to guide development, albeit one well overdue for an update.

In their planning justification, PT had referenced historic transshipment uses of the site, such as the Bethlehem Steel Iron Ore transfer site built in the 1950s.

When asked whether they believe their proposal fulfills the Official Plan, PT again cited previous transshipment use on site.

Furthermore, PT asserted that their proposal is in line with the County’s Official Plan.

“The proposed use of the site for transshipment and cruise ship docking falls within the ‘truck or transportation terminals’ use which is a permitted use of the Industrial land use designation of the site per Section 10.2.1 of the County’s Official Plan,” wrote PT. “Although the County’s Official Plan does not provide a definition for truck or transportation terminals, the Provincial Policy Statement (2020) provides a definition for ‘major goods movement facilities and corridors’ which references truck terminals.”

Based on transportation terminal permitted uses, in this case being the transport of goods and people, PT argues the proposal does adhere to the Official Plan.

IBI also expressed concern at the potential future uses of the site, should rezoning be allowed.

Apart from expressing concern that the proposals in question would largely benefit the owner of PT as opposed to the local community, IBI also noted there is strong support from non-local entities, (e.g. Greater Napanee BIA).

PT commented that by its nature transshipment benefits are vast and that from Picton to the country at large, the impact of their proposal would be positive.

“Ports have more than just local impact. Although locally millions of dollars are pumped into the local economy and jobs, the true impact is felt locally, regionally, provincially and nationally,” they said. “The non-local entities support our team because they see what we have accomplished regionally and how we have done it, and have full confidence we’ll accomplish the same at Picton Terminals, a local, regional, provincial and national positive impact.”

With PT located adjacent to Picton Bay and also being on an escarpment, there was a strong current of environmental concern throughout IBI’s comments. According to the peer review, there is conflicting information regarding the effects on habitat pertaining to the escarpment.

They noted that, according to the Planning Justification Report, maximum vegetation and soil will be retained on escarpments and building setbacks will be increased to prevent their loss or damage.

Noting this, IBI has cited a comment from PT stating that there was little to no vegetation on the escarpment slope near proposed and existing facilities as far aback as the 1960s.

“The fact that portions of the escarpment did not have vegetation in the 1960s does not preclude best management practices and acting to introduce vegetation to those portions to prevent further erosion,” wrote IBI. “Site plan measures should be proposed to ensure a re-vegetation plan for the inactive escarpment portions, similar to that employed on the berms on the property and described in the Environmental Evaluation report. Furthermore, it is our opinion that historic aerial photos demonstrate that the current use of the property has degraded vegetation along the escarpment.”

In response to these environmental concerns, PT noted that all previous and current work surrounding the escarpment has been conducted with the necessary permits and that, as far as they’re aware, there has been no effect on the habitat of the escarpment.

“We are not aware of any effects on habitat as it pertains to the escarpment. Dating back to the 1960s, historic photos show that there was little to no natural vegetation growth on the escarpment slope near the proposed and existing docking facilities. All previous and current on-site escarpment works have been undertaken with all required permits, including those from the Department of Fisheries and Oceans (DFO) and Quinte Conservation Authority (QCA),” replied PT.

PT further explained that a permit was received from DFO on May 2, 2019 which permitted the infill of a portion of the shoreline into the Bay near Picton Terminals to facilitate the operation of the existing port.

“On-site grading and landscaping works are necessary to provide at-grade vehicular access adjacent to the docks for more efficient loading and unloading. Re-vegetation will be undertaken on the proposed berms along the perimeter of the site as well as along the northern and southern edges of the escarpment where it does not interfere with the transshipment operations which rely on unimpeded access between the land and water. The eastern and western areas of the escarpment will be naturally re-vegetated and will include naturalized shoreline,” PT added.

Another contentious issue brought forth in the IBI peer review was that of compatibility. IBI expressed concern that tourism and industrial transshipment uses would be contradictory in nature.

“It is not a compatibility use,” stated PT. “There is no actual tourism taking place on our property. Passengers disembark the vessel to tour buses and drive off our property to tourist destinations. This use has been proven to be successful for many years at many much larger ports, all with similar industrial transshipment uses.”

In parting, IBI strongly recommended that a technical review committee be established with appropriate governing bodies, such as Quinte Conservation, Mohawks of the Bay of Quinte, the and the Department of Fisheries and Oceans, among others.

Since the peer review was penned, PT noted that in consultation with the County’s planning department and IBI, “this recommendation has been pulled back”.

PT mentioned that they successfully demonstrated that all of the groups mentioned (along with others) have provided feedback on their applicable jurisdiction.

A report from staff with recommendations regarding the PT proposals has yet to surface. In the interim, material pertaining to the PT proposals can be found here: https://haveyoursay.thecounty.ca/planning/news_feed/picton-terminals