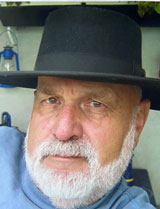 Peter Sztuke
November 1942- April 2020
Peter was born in the charming village of Intragna, Switzerland. He lived for the next several years next to his maternal grandparent’s construction company in Winterthur. He later revisited the area on a business trip in 1978 and with his son Chris in 2006.
In 1951 Peter and his parents Anna, and Ferdynand (Fred) and sister Barbara immigrated to Canada.
While living in Downsview they learned English and experienced more snow and cold weather than they were used to in the Alps. Four years later they moved to Peterborough when Fred accepted the position of chief engineer at Outboard Marine Corporation.
When another position at OMC opened up the family moved to Belgium. Peter attended an English speaking private school in Knokke. During those two years he and his family spent a lot of time in the Alps hiking and skiing and at the family cabin in Nenzinger Himmel “Nenzin in the Heavens”.
In 1960 Peter and his family returned to Peterborough. Fred was then transferred to Trenton. He looked for farm property with lake shore. In 1962 the Sztuke’s bought “the Tayler Farm” between Wellington and Bloomfield.
Pat Shannon introduced herself to Peter when they both returned to PECI for their final year. The Tayler’s were Pat’s great aunt and uncle.
Peter moved to Toronto attended and graduated from Ryerson as a Civil Technologist. Pat and Peter were married in Toronto in 1967.
Peter was hired by Scintrex a geological survey company. He would be dropped off by helicopter in a remote northern area and picked up a few days later (weather permitting). Although he loved the excitement of the north and the air travel he was often away for several weeks at a time and missed many family gatherings.
In 1969 an opportunity arose to purchase Pat’s family home when her mother Eileen moved into Wellington. In July 1970 Peter became the first employee of Cornerstone Builders in Belleville working in sales with one percent commission. Sean and Chris, their sons spent their early years playing in the garage next to the house. Their grandfather Shannon operated the Shell service station until his death as a result of a plane crash in 1958.
In 1975 they moved again, this time to Peter’s parent’s home when his mother Anna moved into Wellington. Mink Island Farm was an ideal place to raise two adventurous, imaginative and mischievous boys who explored every inch of the one hundred acres.
Peter and another employee Gary VanderHerberg bought Cornerstone in 1985. Hearts, souls and long hours were poured into the company. Cornerstone picnics that were held at Mink Island Farm were like big family picnics. Peter sold his interest in the company in 1991 but returned for a short time in 1994.
In 2000 Peter became a member of P.E.C. council representing Wellington. He chaired the planning committee making it more open and user friendly.
Camp Trillium was a big part of Pat and Peter’s lives from the time it was first being built in 1989 on Garrett’s Island adjacent to Mink Island. The Sztuke family built a small cabin on Mink Island to accommodate campers who were only able to canoe the short distance to “the next island”. Every summer voices would carry across the waters as they came on to the main land to collect the family dog for a sleep over, play on the tire swing or simply roll down the hill.
Peter and Pat were privileged to have many years ahead of them to enjoy hobbies and travel. They crossed Canada and the States several time in their 18 foot Roadtrek RV. They enjoyed boat cruises with friends – the Greek Islands, the Danube, Ireland, Highlands and Fiords. On larger ships they explored the Antarctic, South America, and spent three and a half months on a world cruise on the Holland America Amsterdam in 2007.
In 2016, Pat and Peter (with reluctance) moved into Wellington while Chris and Barb moved to Mink Island Farm. Peter was able to keep his “toys” close by and enjoy the solitude of the farm and the lake even as his health started to decline a few years later.
Routinely Peter had coffee with the guys early in the morning. The Wellington Grill was replaced by Enid Grace’s Café. The conversation continued on –changes in The County, County Council, tourism and health challenges.
In 2017-18 rising water levels started to erode the shoreline behind the Wellington United Church. Peter volunteered to guide the committee through the various authorities, a process he was familiar with when at Cornerstone, on council and at Mink Island Farm.
Peter will be fondly remembered for his love and commitment to family, friends and community.